We get caught up, too much, in the vagaries and trivia — what we one day will see as trivial (even if, right now, it may seem momentous) — of this passing world. Lent is a time to place the world in proper perspective.

For beyond it are Light and tremendous endless realities, which we will have eternity to explore.

In an article on a website for the Near Death Experience Research Foundation, a woman called Judie who’s maintaining anonymity narrates how she temporarily died while experiencing labor pains.

This came, apparently, after an anesthesiologist injected an epidural (pain-killer), accidentally putting it instead into a vein (instead of directly into the spine) and causing her blood pressure to drop radically and almost fatally…

“I could see where I had to go,” she recounts. “I remember how surreal it was to realize how dark our world is. I’m not sure how to describe this but I could see the world. It was as if a veil had been lifted that made everything very clear and vivid.

“I rose up out of the dark part of the world and ascended into a very right, peaceful, and painless reality.”

We are calling a new series of retreats “Lifting the Veil” on our existences and the unseen realities.

It’s the word “veil” that also plays into a full-length book account called precisely The Veil in which, as we have surveyed previously, a Christian man describes his lifelong ability to see beyond the facades of this world into an incredible dynamic that, it turns out, plays out constantly around us — a reality we with earthly blinders (made all the worse by those who are worldly) only occasionally feel or glimpse (perhaps during a dream).

There are thousands of angels around us, countless “activation” ones waiting for our requests — which, if in the Will of God, he informs us, become their commands. There are angels of relationships, angels of spirituality, activation angels of health, of financial stability. How often do we avail ourselves of their capabilities?

In that book, Blake K. Healy, who checks out as credible, at one point describes an especially poignant encounter with a warring angel.

“One particular night I was on my way back from a convenience store that was situated just a few dozen yards from our apartment building,” writes Healy, who now lives in Atlanta. “I paused with my hand on the doorknob, feeling a presence arrive behind me.

“These unexpected visits had recently become a more regular occurrence, so I wasn’t surprised to find an angel when I turned around.

“He was at least a foot taller than me with shining hair and sharp features. His armor was absolutely pristine and was solid gold wrapped in irregular but intentional patterns around his arms and torso. There were no marks or scratches on any part of the armor, but something about the gray in his eyes made it clear that this angel had seen his fair share of war.”

Allegedly following this manifestation, Healy, now a preacher, says he was led through a tough part of the neighborhood, which “drew my attention to the double-edged spear that hung across the angel’s back.”

“Each end was crowned by a flat, leafy blade that looked both decorative and immensely sharp,” he recounts. “Looking at it put me at ease.” 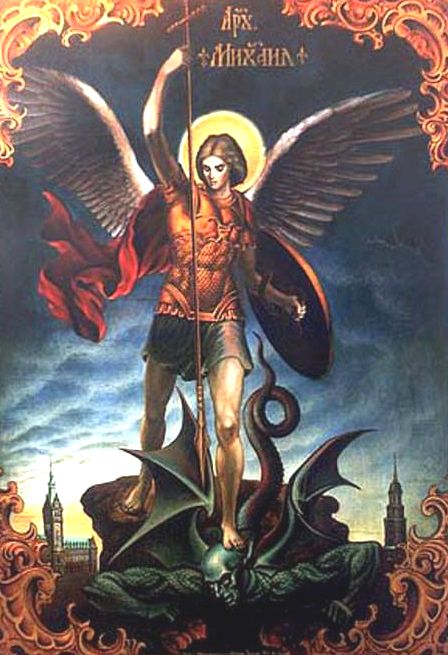 And so we discern: is he fantasticating his concepts of the supernatural, simply imagining or hallucinating, embellishing — or granting us a real-life glimpse that authenticates the many Catholic images of saints such as Michael, spear at the ready, often plunged into a serpent — indicating that our artists, too, saw “beyond the veil,” at least in their intuitions?

“We made our way down two and a half blocks,” Blake continues.

“A steady flow of traffic kept things noisy on our right, while varying degrees of low-income housing formed the derelict scenery to our left.

“Without words or signal, the angel suddenly stopped. His reasoning quickly became clear.

“While every house along the sidewalk was lit by outdoor lights, or at least the gentle flicker of a television near a window, the house the angel had decided to stop at was in complete darkness.

“A wrought-iron fence closed off the dilapidated yard, and a sickly black cloud covered the roof.

“A twisted arch made of the same darkness that covered the roof hung over the gate, adding to the palpable sense of malice that emanated from every inch of the place.” Suddenly, Blake asserts, the angel pulled the spear from its quiver. “A single slash sent a bolt of light into the front door,” he writes.

“Wind rushed past me and blew the darkness away, as easily as smoke. The streetlights seemed lighter with the darkness gone, the malign weight no longer pressing against my chest.”

Do you not sometimes feel the unseen in this way — with a sudden shift in mood or pressure on parts of your body?

And what role do we ourselves play in those unseen dynamics that swirl around us — unnoticed when we are distracted by the clamor of the world?

Here we are left with a mystery:

When Healy asked this heavenly agent why he, Blake, a mere human, was needed — why he had to accompany the angel — the extragalactic presence, if we might term him as such, smiled for the first time, Healy asserts. And answered. “I wouldn’t have been allowed to be here,” the angel replied cryptically, “if you didn’t come with me.”

Our prayers and “stepping out in faith,” it seems, activate what, behind the “curtain,” is usually quite unseen.

[Footnote: Interesting it is how many times of late the Virgin Mary has been warning about materialism as a great evil temptation…]