Immediately upon rising, Sunday morning, my wife told me she’d had an unusually vivid and strange dream. In it she was in a building and entering an elevator behind a somewhat taller woman “who wore Caribbean-like clothes — colorful long dress and a head wrap, with dark skin. She looked like a native Caribbean — West Indies.”

They were the only ones. She walked in first and my wife followed her. “She simply looked at me and I said, ‘Two please,’ meaning the second floor,” Lisa recounted. “The woman didn’t do anything, but all of a sudden the elevator detached from the building and began moving swiftly very swiftly over a body of water.

“I was obviously frightened — it wasn’t doing what it was supposed to — and all of a sudden the elevator seemed to stop and I looked down and saw like an island, with what looked like four dark-skinned natives lying on the ground in a row and covered with big leaves, kind of like big banana leaves — some kind of vegetation — and the only thing you could see was half of their heads and chests. I couldn’t tell if they were dead or sleeping. I was confused as to where we were and I turned to the woman and simply asked, ‘Where are we?’

The woman didn’t seemed surprised at what the elevator had done — that it had become airborne — and acting as if it were something that was supposed to happen. Her response was only: “This is the Island of Nix.”

What, wondered Lisa, was the Island of Nix? Neither one of us had ever heard of any land by that moniker. It took just a Google search, however, to learn that Nix Island, or “Nix’s Mate” — does exist in Boston Harbor: a tiny bit of stone that now has only a navigational beacon on it. So, there was something by that name, and it was surrounded by water! 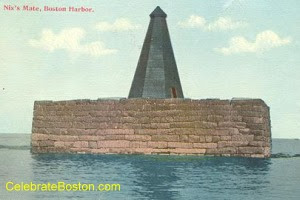 Further reading revealed that Nix’s Mate was once twelve acres in size. As a Boston website puts it, “The island was used a pasture, and as a place for ships to load ballast.

“Pirates were hanged at Nix’s Mate, with their bodies displayed there for a while to deter other buccaneers.

“One convicted pirate protested his innocence until the very end. He stated that the island would be washed away someday, and this would be proof of his innocence. Within a century, the high cliffs of Nix’s Mate had eroded away, with just a rocky shoal remaining today.”

King’s Handbook of Boston Harbor, by M.F. Sweetser (1883), describes Nix Island as “a large, gravelly shoal between Long Island and Gallop’s Island, partly bare at low tide, and crowned by a singular and ominous-looking beacon. It is a massive piece of copper-riveted masonry, forty feet square and twelve feet high, with stairs on one side, upon whose top stands a black wooden pyramid [replaced by concrete in World War II] that is twenty feet high.” It is now in federal hands and off-limits.

And the Carribean connection?

It turns out the pirates who used the island often were in Jamaica and headed for New Guinea before a mutiny, after which they headed up the eastern coast of America to Boston Harbor.

It was known as Nix Island as early as 1636. Murderers and burglars were executed on Boston Common or on Boston Neck; but the people whose crimes were perpetrated on the high seas suffered the penalties of the law in sight of its accusing waters.

“The most popular legend associated with Nix’s Mate states that Captain Nix was killed at sea, and that his mate was charged with the crime, and executed on this island,” says the website.

“Another form of the legend states that Nix was a pirate, who sailed into Boston in 1680, his ship well laden with treasures ravished from unarmed ships. Anchoring down the harbor, he and his mate went ashore on the island, on a dark night, and buried several bags of coin; after which, to keep the secret as close as possible, Nix murdered his companion [thus the name mate], and buried him also. The continuation of the story is crowded with ghastly circumstances, not described here.

“For upwards of a century Massachusetts Bay was infested with pirates or freebooters, who plundered passing vessels at will, and were sure of a short, swift and stern retribution when caught.”

As a result of all that, was it cursed?

As another rendition puts it, “The most famous sufferer on Nix’s Mate was William Fly, who headed the crew of the Elizabeth in a mutiny, while on a voyage from Jamaica to Guinea, and threw overboard the captain and mate. Afterwards they changed the name of their vessel to Fame’s Revenge, and embarked on a piratical cruise along the American coast.

“But their prisoners rose upon them, placed Fly and three of his men in irons, and ran the Fame’s Revenge into Boston, where the unfortunate buccaneers were executed. Fly was hung in irons, on Nix’s Mate, over the graves of his confederates; and here his bones shook and rattled in the sea-air for many months, as a grim warning to all mariners.” Quite a tumultuous, violent history!

“An alternative to the origin of the name Nix’s Mate was presented by Edward Rowe Snow. In The Romance of Boston Bay (1944), Snow quotes a letter written in 1700. A vessel was anchored off Nix’s Mate, and the passengers could hear the strange sound of the waves striking the cliffs on part of the island. A Dutch passenger called the noise Nixie Scmalt, which purportedly translated in old Dutch to old English as ‘The wail of the water spirits.’

“The bones of pirates were long washed away at Nix’s Mate, but do their restless spirits remain in the harbor?”

We wonder the same.

Were islanders once taken as slaves and then executed on the island — or executed down in Jamaica, haunting the pirates? Might it be that the unsettled souls on the island are in need of prayer — that they languish, to this day, in purgatory, my wife guided to the place by an islander who though stoic perhaps found mercy not only for slain islanders, but for the exploiters of her native land?