The news that Rome has named a Polish bishop to serve as pastoral envoy to Medjugorje serves as tacit acknowledgement of the apparition site’s global significance.

In fact, beyond the tens of millions who have visited is the effect: pilgrims virtually always report a profound uplift in their spirituality and a great deepening of their Catholicism.

One European cardinal has publicly stated that Medjugorje has produced more priestly vocations than any other force in the Church — and indeed has rescued parishes.

How a place of such potent positive results — something the Church knows as “fruits” — could be so vehemently resisted, including and indeed even most acutely within factions of the Church (among certain passels of conservatives on one side, and especially with modernist liberals at the other extreme of the spectrum), is baffling though one can always note prudence.

In other cases, it seems more like flat-out spiritual warfare.

Effects have been especially noticeable among young who have visited and returned as fervent Catholics, no longer resisting Mass attendance — something that among the Catholic young is a massive crisis.

There is no such issue among young after visiting the place in Bosnia-Hercegovina. The church is full to overflowing — such that pilgrims must sit outside.

But the naming of Archbishop Henryk Hoser, the Bishop of Warszawa-Praga, as “Special Envoy of the Holy See,” is hardly an acknowledgment of the apparitions themselves.

The scope of his mission, according to the press release announcing the appointment, is “to acquire a profound understanding of the pastoral situation” in Medjugorje, with special concern for the “needs of the faithful who come on pilgrimage;” and on the basis of that understanding “to suggest possible pastoral initiatives for the future.” His mission, therefore, “will have an exclusively pastoral character” and ends next summer.

Still, this is welcome news at a place where there has been inadequate Church guidance of seers and faithful alike since the onset of apparitions’ in 1981. “It’s important to note that it’s not an apostolic visitation,” the Vatican press chief, Greg Burke, concluded Saturday. “Look at the words. This is more ‘for’ than ‘against.’ It’s for the life of the pilgrims who go there.”

A final decision on authenticity will be made not by an envoy but the Congregation for the Doctrine of the Faith, whose current prefect, Cardinal Gerhard Müller, as first reported here, famously stopped seers from public apparitions in the United States and some spots elsewhere.

Through the years, the Vatican has quietly sent observers to Medjugorje — including Pope Benedict XVI himself, when he was Cardinal Josef Ratzinger, prefect of the congregation — but for a long while Rome had allowed the situation to remain solely in the hands of two factions that oppose each other, the local Franciscans who operate the parish and the secular Bishop of Mostar.

They had vied with each other for authority over Hercegovinian and Bosnian parishes (leading to the antagonism, toward Medjugorje, of Mostar bishops), but the local bishop’s authority was stripped in the late 1980s (despite claims of those who continued to use statements from Mostar against the apparitions). The appointment of an outside bishop definitively reaffirms the limitations of Mostar’s even pastoral involvement.

It was perhaps the fact that Benedict (as Ratzinger) had paid the personal visit (perhaps more than one) that swayed him from taking action against it. Critics have tended to be those who adjudge from afar. 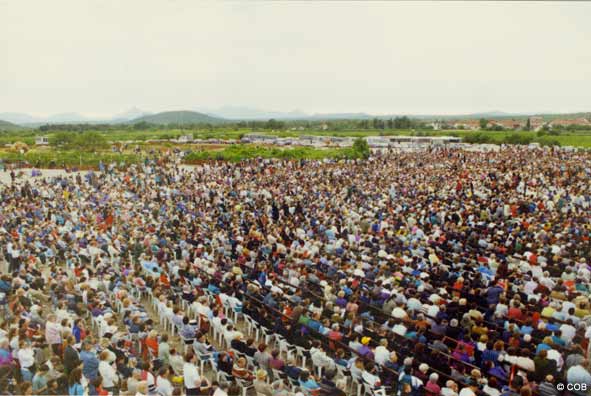 There was also the strong, almost fervent support of Saint John Paul II, who told many visiting cardinals, bishops, and priests not only to visit the site but to protect it, mentioning in personal letters to Polish friends that he “went there every day” in prayer. (He reportedly blessed Medjugorje, which is just across the Adriatic from Italy, when he flew over the region on his many trips abroad).

It has always been of interest to followers that John Paul II instituted World Youth Day after purported messages from  Medjugorje called for just such interaction with the young. (Saint John Paul II was known to have requested the monthly message.) Saint Mother Teresa of Calcutta sought the intercession of the Medjugorje Madonna to find an AIDS cure.

But the stance of the current Supreme Pontiff is not known. As far as anyone can tell he never visited and on at least two occasions has reportedly poked fun at seers who issue daily messages (as if, said the Pope, Mary is “the head of the post office”).

On the one hand, there are the equivoques of the Pope, and the restrictions of Cardinal Müller, while on the other hand is the fact that the Pope has chosen as envoy an archbishop from a nation that has sent more pilgrims to Medjugorje in recent years than any but for Italy and perhaps Ireland, and that Francis is close to Cardinal Christoph Schõnborn of Vienna, who periodically hosts appearances of Medjugorje seers at the city’s cathedral.

Though not necessarily indicative of his overall attitude, the Pope’s “postmaster” criticisms portend a skeptical stance toward certain ways in which the situation has been handled, and thus the institution of an envoy, who may well put a halt to the scheduled apparitions that often draw thousands to hills and halls at Medjuogorje and churches elsewhere.

But overall, news of the envoy will probably lead to an upsurge of pilgrims.

Though attendance has been lagging since last year, Medjugorje may have a larger following than Fatima did at this stage. The shrine at Fatima, commemorating the 1917 apparitions, was not completed until 1954, though there was a large pilgrimage in 1942.