FROM THE ARCHIVES OF WWW.SPIRITDAILY.COM:

The ‘Other Side’: Doctor Describes Death, Encounter With Jesus

I’m reading a lot about near-death experiences and have come across the extraordinary case of a medical doctor named George G. Ritchie (left), who died many years ago at the age of twenty while in the military.

It’s an extraordinary account because of Ritchie’s credentials as an observer. He held positions as president of the Richmond Academy of General Practice in Virginia and was chairman of the Department of Psychiatry at Towers Hospital. But far more impressive was what actually happened. Dr. Ritchie claimed to have had a dramatic encounter with Christ — one that showed Our Savior to be far stronger and more manly than is commonly depicted by modern artwork, bringing to mind instead images of the Turin Shroud.

This is crucial because it is the over-softening and even feminization of Jesus’ image that has almost certainly contributed to a drop in male church attendance during the past several centuries.

How does He really look? And how does the doctor know?

According to Dr. Ritchie, who wrote a book called Return From Tomorrow,  he had his brush with death in an army hospital at Camp Barkeley in Texas in 1943 during basic training. Somehow he caught a pneumonia-like ailment just before he was to begin his education at the Medical College of Virginia — something he had been dearly looking forward to. Unfortunately, his fever skyrocketed, he was whisked away for emergency x-rays — and the next thing he knew there was a buzzing noise, a constant whir, and he found himself out of his body (though it took him a while to realize it).

Before that realization Ritchie found himself in a confused state as do so many who have a brush with actual death. What he knew was that he had to get to Virginia and suddenly he found himself hovering over the countryside — out of the hospital and over the terrain.

How could he move so fast? How could he fly? Most perplexing, when Ritchie ran into humans, he couldn’t get their attention. He could not interact with them. 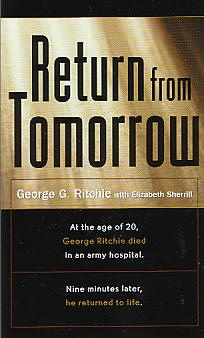 Instead, he was whisked across the landscape — on his way back to Virginia — and halfway there found himself in a city he was later able to identify through an incredible “coincidence” as Vicksburg, Mississippi. For some reason he was in a strange town unable to talk with those he saw nor to affect anything physical. When he tried to lean on the guy wire of a telephone pole, his claimed “body” went right through it!

In a bit of a panic the young Ritchie decided he had to return to Texas and find his solid self. The mere desire for this propelled his spirit back to Camp Barkeley — where after a search of the wards he was able to locate his body, which was completely covered and identifiable only because of a ring on one of two stiff hands poking out from the sheets.

Frantically Ritchie tried to uncover his body but wasn’t able to budge the sheets. That was when he had an encounter with Jesus, Who came as He does so often — whether visions or near-death episodes — in an extraordinary light.

In the middle of that came the thought that he was glad he didn’t have physical eyes; for the light was so bright it would have destroyed his retinas. With his spiritual “eyes,” however, he had no problem looking at it.

This was not the Jesus of his Sunday school books, notes Ritchie. It was not the Jesus that many artists portray. “That Jesus was gentle, kind, understanding — and probably a little bit of a weakling,” he notes. “This Person was power itself, older than time and yet more modern than anyone I had ever met.”