Sometimes, things aren’t what they seem.

For instance, the photo above might at first glance seem like a miraculous manifestation: a Cross illuminated in the sky. And if it were a natural phenomenon (say, the setting sun), one couldn’t be blamed for finding it of note. But in this case — beautiful though it is (and mindful though it might be of a cross) — it’s a launch last summer of something called the Space X-Falcon-rocket at Cape Canaveral (as reported in USA Today).

Another example: last week, there was a brouhaha over Time Magazine’s cover of Donald Trump as “Person of the Year” (remember when it was “Man of the Year”?). The brouhaha was because the top two peaks in the “M” were such that, if one really wanted to, one could see them as the devil’s horns — albeit ill-fitting ones. Much more convincing were the “horns” back in the 1990s on a cover of Bill Clinton (here they fit better, and that’s meant literally, not judgmentally; they were smaller). Whatever the case, Time says all such are coincidental and that through the years at least thirty-five covers have placed the “horns” on featured celebrities. It’s simply a matter of the masthead lettering.

The video clip below: what caused the sky to light up?

The answer in this case:

Yes; it was a meteor on December 6 in Khakassia, Russia (many meteors in Russia!)

And about that silhouette [below] on the side of a house in Kilmallock, Ireland (also last week) — a shadowy likeness that appeared around 11 p.m. last Thursday, with crowds gathering into the wee hours as word spread in County Limerick.

You can make of it what you will, but it does resemble the way the Blessed Mother arrives — you can virtually see the folds of her robe and veil, perhaps the outlines of her eyes, and her arms. 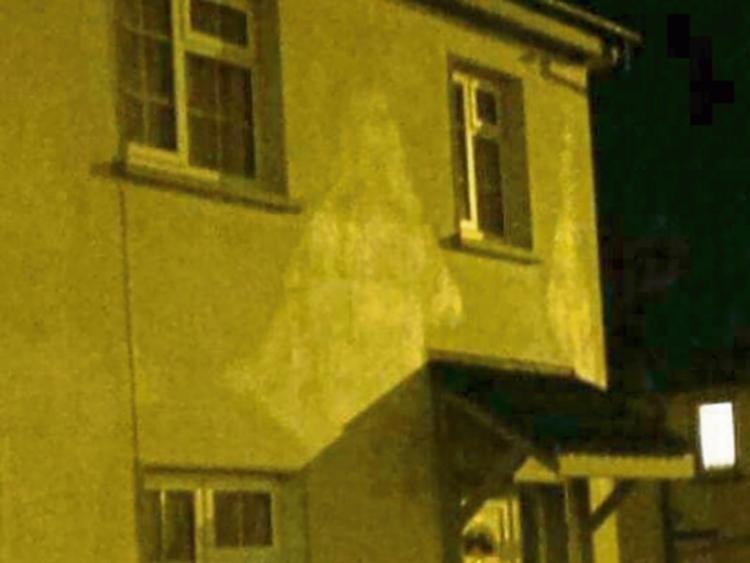 This has not be explained away (as yet) and, interestingly, Kilmallock was also noted for a manifestation reported long ago — in September 1880 — when women who were working in a field near the local chapel that what they saw to be the figure of Mary in a tree.

Soon the spot was visited by thousands, several of whom professed to have witnessed apparitions and strange lights inside the church.

As a newspaper of the time related it, “Respectable and intelligent persons allege that they have seen distinctly apparitions of the Blessed Virgin.”

This comes from a book by Brian Nugent entitled Marian Apparitions in Ireland — of which there have been many, the most famous of course at Knock, where the Blessed Mother as well as Saint Joseph and John the Baptist were seen on a living but silent tableau at the side of a church the year before (1879) and not a great distance from Kilmallock.

See as you will. See in the sweet depths of prayer.