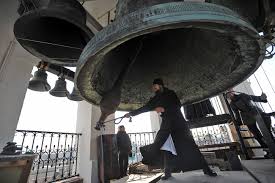 When England was ravaged by the Black Death, bells were rung to dispel it.

The ringing of those metal domes during a funeral supposedly drives the dead person’s ghost away.

It’s also said that unearthly noises, including bells, were heard just before collapse of an ancient bridge over the Rhone River.

Witches are said to fear bells. In England, a bell dropped into the river by seven witches is to have been heard rolling from under the waves during great storms, according to legend.

In discerning various aspects of life — and particularly those related to the supernatural — the question, constantly, is: When are we exercising prudence (in declaring something as questionable, “occult,” or “new age”) and when are we going over the top (into the realm of the overly dismissive)?

When are we exclusionary simply because it doesn’t neatly fit with our own set of experiences and traditions?

For sure, it’s better to err on the side of caution than be vulnerable to anything dark — although there are cases, with Christian websites, where everything seems to be deemed as occult simply because it’s foreign to one’s experience.

A possible example — and at first glance an odd one — is wind chimes, those tinkling novelties of metal that clink and resonate with the breeze, even sold by the likes of Wal-Mart and Home Depot. Many, many have them as lawn decor. Or hanging on porches. Yet, there are those who raise the warning flag about them, citing the origin of wind chimes in ancient China, where they were placed in pagodas to shoo away evil spirits.

Ancient Chinese temples, they note, were pagan (in the case of China, Buddhist). Ergo, goes the notion, wind chimes are pagan. Practitioners of Fen Shui use them as a way of parting good energies from bad ones.

Is that enough to negate an object or custom? Perhaps. But — others argue — that kind of standard would also condemn to the dustbin Easter eggs, mistletoe, candles, the cornucopia, paisley, and the peace sign, as well as the Christmas tree, all of which likewise have origins in pagan societies. If a person is hanging a wind chime as a simple decoration, or because they enjoy the tinkling sound, or use it as a weather vane (not as “magic bells”), is that a problem? Is there a hidden “vibe” that can penetrate the subconscious or spirit no matter the intention?

There are churches that use what are deemed chimes.

But of course, when we think of churches, we think more in terms of bells.

And it is interesting that these too are connoted by some as having a spiritual dimension — albeit a good one.

It may be surprising to learn that the bells with which we are most familiar — eurhythmic belltower ones — also originated as vessels to ward off evil.

Mainly, bells or chimes have been used, in the Christian tradition, to call worshipers to Mass or prayer — to announce canonical hours (such as the Angelus; perhaps they should also ring at three p.m., for Divine Mercy). They also may be rung for a wedding or funeral. They are used during Mass itself at Consecration. A far cry — in the case of bells — from paganism.

“The amazing effect of the bell on a human being was known long before our era,” notes one website, writing about the effect of bells in Russia. “According to Konstanin Mishurovsky, a historian and bell-ringer at the Moscow Kremlin and the Cathedral of Christ the Savior, the secret is simple: The bell combines two opposing qualities – the strike and the prolonged singing.

“People who hear the bell are mesmerized by the unexpectedness of the sound and by the depth and complexity of that which follows,” explains Mishurovsky. “It is like awakening after sleep: The person is asleep and then suddenly opens his eyes, and the whole world starts revolving around him, leading its life as usual. It’s the moment of the beginning of life. That’s why the bell has such an important edifying effect, why bells are so fundamental in Christianity.”

The Christian tradition of swinging a clapper in that dome of metal from a belltower is analogous to the Islamic tradition of the adhan from a minaret (to drive away demons).

According to a book entitled Benjamin Franklin’s Science (Harvard University Press), The practice of ringing church bells to dissipate lightning storms and prevent their deleterious effects had a long tradition in Europe and had been a concomitant to the general belief in the diabolical agency manifested in storms. … Typical inscriptions on church bells described their power to ‘ward off lightning and malignant demons’; stated that ‘the sound of this bell vanquishes tempests, repels demons, and summons men,’ or exhorted it to ‘praise God, put to flight the clouds, affright the demons, and call the people.’

And so we see how careful we must be before pronouncing a verdict.

The sounds are too heavenly — and too well-purposed — to be anything but good; as far as chimes: instead, use Holy Water to dispel evil. No one can doubt that effect.