The climate has shifted.

Some think so — and not just in the way of sunspot activity.

There are those who believe it’s whiter and stronger than used to be.

Is it really true that solar or atmospheric changes (for example, in the ozone layer) have caused more of its rays to penetrate, causing increased risks of skin cancer? Is that why some believe the white sun they now see was once orange?

Scientists say the sun is actually all colors combined, but that depending on atmospheric conditions and earth’s position, can appear to be orange or red. As a scientist from Stanford explains, “When we see the Sun at sunrise or sunset, when it is low in the sky, it may appear yellow, orange, or red. But that is only because its short-wavelength colors (green, blue, violet) are scattered out by the Earth’s atmosphere, much like small waves are dispersed by big rocks along the shore. Hence only the reds, yellows, and oranges get through the thick atmosphere to our eyes.”

Others insist there has been an actual change. Noted a commentator on Reddit: “There’s an illustration from one of [astronomer] Carl Sagan’s books that depicts ‘the last perfect day on earth.’ It shows what the sun and sky would look like as it begins to die off.

“I remember growing up with the former and I think our current skies more resemble the latter. Perhaps there’s an even stranger reason why the sun and clouds look the way they do now, and why other solar/climate phenomena have been deviating from the norm lately.”

Signs in the sun and the moon? (“And there will be strange signs in the sun, moon, and stars. And here on earth the nations will be in turmoil, perplexed by the roaring seas and strange tides” — Luke 21:25 — as there are rising seas in our time).

Or just the nuances of perception?

Another went way out on a limb: “Born in ’75 and the sun was different. It was yellow and had a totally different energy to it. I think the whole world shifted on 9/11/01. The WTC ‘attack’ was merely the overt ritual to signal a greater change.”

How about smog? Do people realize that pollution from China reaches the West Coast of the U.S. (and that insecticides from tobacco fields in the Carolinas find their way onto pastureland in Sweden)? 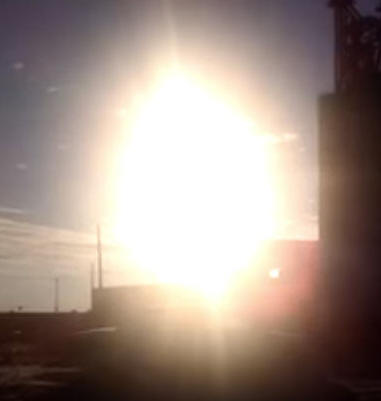 Note that during the High Middle Ages there was a warming in global temperatures identical to now that then shifted to global cooling when sunspot activity vanished during what they called the “Maunder Minimum.”

We really don’t even understand how the solar orb, which supposedly operates on hydrogen and nuclear fusion and has 99.8 percent of the solar system’s mass, radiates so much power.

Even Forbes magazine has weighed in, quoting a physicist named Viktor T. Toth, who says: “Our Sun is white, and it would look white if you looked at it from space. The atmosphere scatters sunlight, especially light of shorter wavelength, i.e. blue light. So the Sun appears slightly orange-ish as a result. The missing blue light isn’t really missing at all, it’s what makes the sky blue! All that blue light that you see from the sky during the day, that’s just scattered sunlight.”

By 2020, there will be another “solar minimum” — a period of virtually no sunspot activity, which usually means lower temperatures on earth.

But everything has become unpredictable. What the sun does is one thing; how the earth and its surface and atmosphere react to it are another. Scientists really don’t understand it. On January 23, 1976, The New York Times had a front-page headline that said, “Doubts Are Raised On Why Sun Shines.”

In the long-term, the sun is on a very gradual increase — or so they speculate: a warming trend that will take a billion years!

Said another blogger: “As for other stars, I am a city boy, and like you, I thought for a long time that stars were white. Until one clear, moonless summer night, in a remote place far from cities, I looked up at the sky after my eyes fully adapted to darkness. And … the sky was full of color! There were orange stars, red stars, blue stars, green stars, you name it.”

Note how scientists capitalize “Sun” and “Earth.” One thinks back to the Book of Wisdom (15), how what is idolized is used against those who worship them, to give warning (or chastisement).