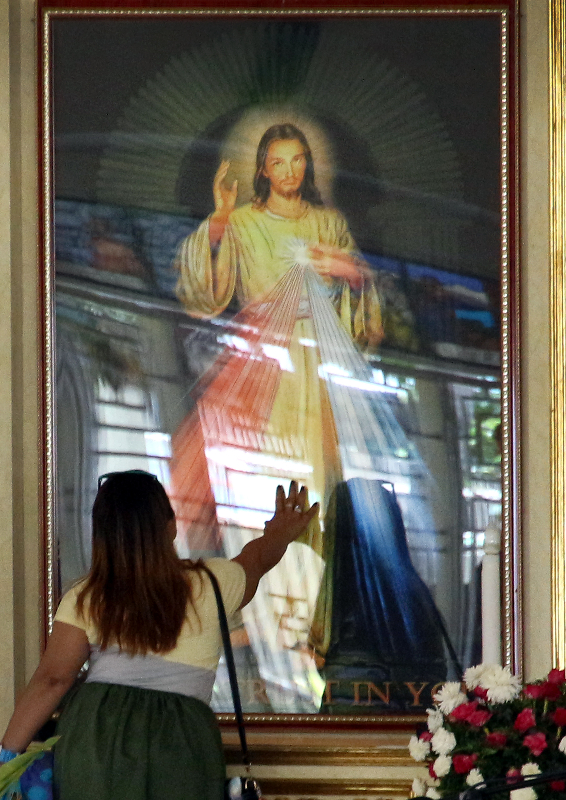 1.       Picture of a devotee touching an image of the Divine Mercy inside the Church of the Divine Mercy in El Salvador City, Mindanao Philippines. Taken 28 March 2016 by Mike Dial.
2.       The Church of the Divine Mercy has a unique roof design in the shape of the Crown of Thorns, and located just behind a large Divine Mercy statue. It was consecrated February 11, 2013.
3.       The Divine Mercy Church interior can accommodate 2,500 pilgrims, but in previous years more than 60,000 devotees joined the Divine Mercy Sunday procession and hourly mass, according to Oliver Molinao, spokesman for the Divine Mercy Foundation.
4.       Several bougainvillea flowers adorn the steps of the Divine Mercy statue.
5.       It takes 111 steps to climb to the top of the Divine Mercy statue where an inner chamber inside the heart of Jesus’ contain a tabernacle where one can adore, pray, and petition God.
6.       The 70-foot statue has carefully manicured lawns and adorned by a variety of flowers. A canopy in front is being prepared for the Divine Mercy Sunday mass celebration where more than 60,000 pilgrims are expected to attend. Women are not allowed to have shorts, or pants when climbing to the Eucharistic Heart of the Divine Mercy statue but long skirts are readily available. Photo by: Mike Dial
7.       The Divine Mercy statue, in the Divine Mercy Hills of El Salvador, Philippines, is 70 feet when measured from the base and one of the largest in the world. It stands majestically on a hill overlooking the ocean. Aside from the large statue with steps inside the rays, and a unique church with a Crown of Thorns for its roof, the 27 acre Divine Mercy Hills property also has life-sized Stations of the Cross, Mary’s Garden, Field Altar, Retreat and Seminar Facility, Gift Store and convenience areas.
8.  Many healings and conversion has been attributed to this Divine Mercy place. In their past celebration I have photographed Muslim women on line to receive the healing prayer and blessing from a priest. One of the very first miracle officially recorded there was a picture taken by me. I was visiting on August 25, 2004 and there were no structures yet but only a bamboo shed that was being used for prayer.
I was videotaping the area when I noticed a bright blinking light on the sky. The blinking light appeared on top of a metal marker on the ground where they planned to build the Divine Mercy statue.
I made a still picture of one of the video frame and gave it to Paquet Adaza, the Administrator for the Divine Mercy Project there.
The picture created a controversy because half of their Divine Mercy prayer group called it a fake. They thought it was a still digital picture which can easily be manipulated.
They did not know, up to this day, that the original was from an impossible to edit video tape sequence.
The miracle picture was later accepted though and was published in their book, pamphlets and brochures.
They also had it enlarged and displayed for visitors to see because the miracle picture with the bright star in the sky is where the present Divine Mercy statue stands.
In God’s Divine Mercy
Mike Dial
[Return to www.spiritdaily.com]
[Michael Brown Special Reports]