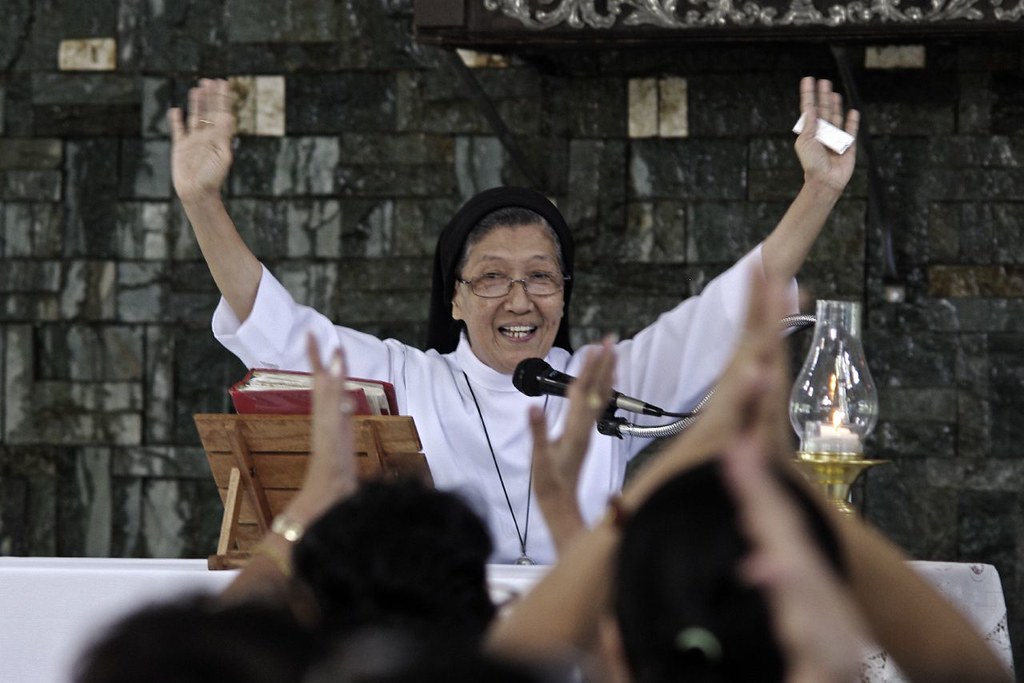 The mailbag is always interesting, rarely more so than when it involves the issue of alleged prophecy.

It’s a volatile topic. Occasionally, a theologian or cleric will state that to “prophesy” doesn’t mean to predict, but rather to proclaim — and there is fact in that: preaching the Truth is one of the definitions, and perhaps the key one, of prophecy.

But throughout Scripture, prophets also foresaw future events. It is plainly written from Isaiah and Jeremiah to Ezekiel (not to mention Jesus).

But it is a very tricky topic to approach (italicize “very“). When does prophesying that edifies (which the Bible encourages) give way to sensationalism and titillation (playing to “itching ears,” which Scripture does not encourage)? For example, what does one do with an article sent in the mail asserting that a “visionary and healer,” Sister Raquel Reodice, RVM, of the Philippines, has had prophetic indications lately — written in oil?

Some background: according to their website, the Religious of the Virgin Mary is a congregation fully approved by the Church and dating back to Sister M. Ignacia del Espiritu Santo, a humble, devout woman who lived during the Spanish colonial era in the Philippines.

The order she began was approved by the Archdiocese of Manila in 1732.

The oldest and largest Filipino congregation, it is the first all-Filipino religious congregation for women in the Philippines.

Sister Raquel — the healer and prophet — is a member of this order, and as for her background (before we get to a recent unusual prophecy): “Back in June 1991, right after the eruption of Mt. Pinatubo, when sister did not have healing powers yet, a Filipino woman, a visionary, approached her,” says a website dedicated to her story. “The visionary said that she would soon receive healing power from the Lord. Sister Raquel brushed off the idea with a laugh. She said, ‘who was she’ to get such a gift?”

“The visionary instructed her to go to Poong Bato (literally ‘the Lord made of rock’), a remote village at the foot of Mt. Pinatubo in the province of Zambales. There, the visionary said Sister Raquel was supposed to pray to Our Lady and ‘pick her up.’ In Poong Bato, a six-foot statue of Our Lady made of cement fell to the ground, half buried in ash because of the violent Mt. Pinatubo eruption. Twenty-odd men tried to put the statue upright but they could not. The statue was just too heavy.

When Sister Raquel finally went to Poong Bato [after initial reluctance], she prayed to Our Lady for guidance and was thinking about what the visionary meant that Sister Raquel was supposed to “pick up Our Lady. After prayer, she reportedly gathered ten men to try once more to put the statue upright and they were shocked when indeed they could do what twenty men earlier could not.

“And so Sister Raquel did ‘pick up’ Our Lady there. The statue was eventually named Ina Poong Bato, or Mother Poong Bato. A replica stands at the Manila Cathedral today, and another at the Mother Ignacia Healing Center, donated by the local government. Sister Raquel believes that it was at Poong Bato that she received her healing power. For in a few days, the Lord was able to heal the sick through her hands.”

“After her first healings, her fame spread like wildfire. She conducted healing missions in ten countries around the world in the next four years: Spain, France, Taiwan, Thailand, Hong Kong, Italy, Canada, United States, Japan, and England. In 1992, she covered five countries in three months. Her second and third trips were in 1993 and 1995. Filipinos from California to New York flocked to her.”

It is said that after spending time with her, famed Cardinal Jaime Sin of Manila said, “I give you my blessing to heal in Jesus’ Name.”

The lore has built around her. When she prayed to halt another eruption of Mt. Pinatubo, it is claimed, the steam and high temperature at the crater suddenly vanished. When she ordered a super-typhoon to make a detour, that also (allegedly) happened. “This was featured in many news reports,” says the website. “When she prayed for SARS to go away in a global telecast with [host] Julie Yap Daza, Time Magazine reported two weeks after that SARS suddenly and mysteriously vanished as fast as it emerged. Skeptics doubt if all these could be attributed to a lowly Filipino nun in prayer. But the thousands who have been healed in the last 15 years believe she has the power to talk to nature as much as she has the power to heal them.

“When Typhoon ‘Ramil’ threatened Ilocos a few weeks after Typhoon ‘Ondoy,’ Sister Raquel and a chaplain, Father Teofilo, fell on their knees in prayer, pleading to the Lord to spare the Philippines,” said a newspaper Philippine Daily Inquirer. “Curiously, two high-pressure areas sandwiched Ramil, which weakened into a tropical depression and veered towards Taiwan.”

If that isn’t enough to discern, the newspaper also asserts that the sister “says she has received Divine messages to the world that in the last few months came in the form of mysterious pools of healing oil. This healing oil became the basis of Sister Raquel’s claim of messages from the Lord for the world. She did not hear voices, she simply ‘felt’ the messages overwhelm her consciousness, which she finds hard to describe.

“First, the nun says the oil, which appeared arranged in nine lines, refers to nine years (2009 to 2018) that the Lord is giving mankind to change its ways. This is a deadline, she says.

“Second, Sister Raquel speaks of the urgency for the rich, comprising three percent of the country’s population, to give to the seventy percent who are poor. This virtue of sharing is not an option, it is an obligation, she says.

“Sister Raquel says the Lord is not requesting but demanding that everyone start helping others, praying harder, and renewing lives in Him. Sister Raquel stressed that people are not obliged to believe her. Faith is a gift and belief is of the free will. But there is nothing to lose in listening to the warnings, old warnings we have forgotten (the third secret) and everything to gain in renewing life in the Lord.”

As the website put it: “Recalling the story of her gift of healing, Sister Raquel says that it is so easy to reconcile the will of man to the will of God. All man has to do is surrender himself totally and God will do everything. This does not mean man will simply sit there waiting for God’s Hand. He must also act, but his movement must search for the Will of God. That is the only way God can work wonders. He cannot act if Man’s will resists. They must work in tandem.”

That we’ll receive as prophetic!

[resources: Sent To Earth and Tower of Light]

[Also in the mail, having to do with another mystic, and prophecy, if we believe that such comes in dreams: “In light of the recent attention to Maria Esperanza, it brought to mind a dream that I thought I would share. I met Maria in 1996, and saw the coming saint in action at her home in Betania.  In March of 2008 shortly before 3 a.m., I woke up from one of those very vivid dreams that I knew was not just the regular dream.  I had never had one like this.  In the dream, I had gone to visit Maria in her home in Venezuela.  It was a two-story home, white in color. It was not like her home at Betania. There were many people in her home, and I waited until I was called to speak with her.  I asked one question,  ‘Maria, is it true that there is only 2-3 years left?’ In the dream she answered, ‘yes.’ The next thing I remember is boarding a double-decker bus with Maria and her grandchildren. We were going on a site seeing ride through the lush green hills of Venezuela. We were on the bottom part of the bus talking. I was looking at the scenery and suddenly a black colt, that was obviously starving, emaciated, ran across the road. It horrified me, and I turned to Maria and asked if she saw it. She had not, but told the bus driver to stop the bus and instructed me to go with two of her grandkids and go ask the farmer what was wrong. It was a dirt road that we jogged up. As we were making our way up the hill, I noted more horses, I also noted they were all starving even though there was grass all around. The farmer was at the top of the hill, I approached and asked,  ‘Sir, what is wrong with your horses?’ The farmer looked at me like I had two heads. He responded with a frown: ‘What are you talking about?’ There is nothing wrong with my horses. They are fine!’ I turned around, flustered at the farmers answer to head back and tell Maria. I woke up, knowing I was just given a gift. Later in the week, I received an interpretation while listening to the radio: what is abnormal will be called normal. What I didn’t notice till this week recalling the dream was the fact that the horses were starving even though there was food everywhere. I just heard a fellow say people are going to be hungry even though there will be plenty of food on the shelves. He said this year, inflation is going to eat up 30-50% of wealth and people won’t have enough money for food. I do not know what 2-3 years left really mean. Left to what? Thank you very much.”

For your discernment (which is as good as ours).

“I just want to let you know about something that happened on 1/24/2010 at about 9:30 p.m.,” adds viewer Paulette Kolmar. “I wrote you before regarding very short visions I have as I fall asleep, but am still awake, just at that moment of going from awake to sleep.  Every single time I have them, they happen. Sometimes these events occur right away, but sometimes weeks later or months later. I just want to ask you to please ask your readers to pray very hard for people who are not prepared to die. I saw what I believe to be a huge earthquake and I believe it will happen in or by China, the magnitude of about nine. I feel as though the Lord has been calling me to pray for people who will be taken suddenly from this earth. Please ask your readers to pay: ‘Merciful Jesus, turn back the Hand of Your Father’s wrath. Have mercy on people where destruction may come. Bring forth souls to God that they may not suffer despair.’ I pray this prayer before going to sleep and every time I wake up in the night.”]