Send us any amazing “coincidences” that have happened to you.

Of course, one wonders if there is any such thing as a coincidence.

When we die, it will all tie together; it will make sense.

For now, we enjoy the challenges and mysteries — so many! — of life.

Famed psychoanalyst Carl Jung called meaningful coincidence “synchronicity” and cited the example of a patient who had an impressive dream the night before, “in which someone had given her a golden scarab — a costly piece of jewelery. While she was still telling me this dream, I heard something behind me gently tapping on the window. I turned round and saw that it was a fairly large flying insect that was knocking against the window-pane from outside in the obvious effort to get into the dark room. This seemed to me very strange. I opened the window immediately and caught the insect in the air as it flew in. It was a scarabaeid beetle, or common rose-chafer (Cetonia aurata), whose gold-green color most nearly resembles that of a golden scarab.”

Now in this case, one is forgiven for asking this man of psychiatry: do we need words like “acausative” and “synchronicity” or are they a bit of psychobabble when the cause is God, an angel, or a spirit?

In 1975, while riding a moped in Hamilton, Bermuda, a man named Erskine Lawrence Ebbin was accidentally struck and killed by a taxi. The next year, this man’s bother Neville was killed in the same way (and also at age 17). In fact, he was riding the very same moped on the same street (though not the exact same spot). To stretch the odds even further, he was struck by the very same taxi driven by the same driver — and even carrying the very same passenger! Now, granted, Bermuda is not a big place, and many drive mopeds, but this goes beyond oddsmakers.

There is often a cross or blur between coincidence and foreknowledge — when things happen as we saw,  in the case of the woman with Jung. With other cases, it seems more like prescience.

In the mail, after a recent special report on foreknowledge, from Barbara Gioffre of Koppel, Pennsylvania, near Pittsburgh: 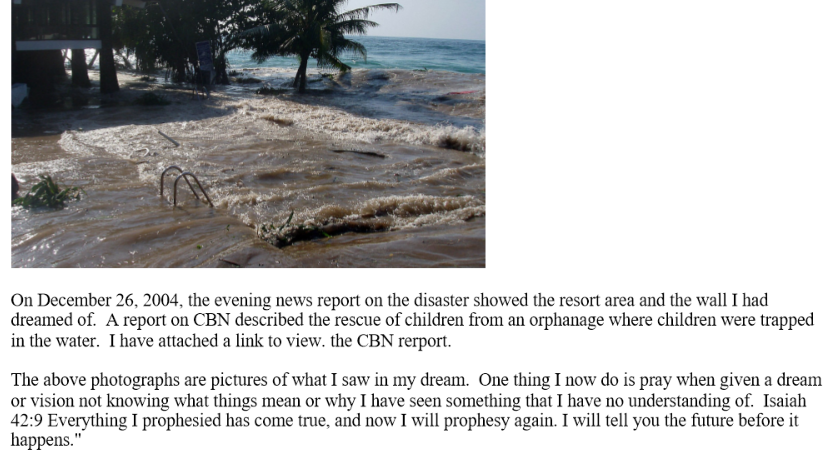 Notes a website — and this we have to place in the category of foreknowledge:

“Morgan Robertson, in 1898, wrote Futility. It described the maiden voyage of a transatlantic luxury liner named the Titanian.

“Although it was touted as being unsinkable, it strikes an iceberg and sinks with much loss of life.

“In 1912 the Titanic, a transatlantic luxury liner widely touted as unsinkable strikes an iceberg and sinks with great loss of life on her maiden voyage. In the book, the month of the wreck was April, same as in the real event. There were 3,000 passengers on the book; in reality, 2,207. In the book, there were twenty-four lifeboats; in reality, twenty.

“Months after the Titanic sank, a tramp steamer was traveling through the foggy Atlantic with only a young boy on watch. It came into his head that it had been thereabouts that the Titanic had sunk, and he was suddenly terrified by the thought of the name of his ship — the Titanian.

“Panic-stricken, he sounded the warning. The ship stopped, just in time: a huge iceberg loomed out of the fog directly in their path. The Titanian was saved.”