Every year, it seems, paratroopers with the 82nd Airborne Infantry Division of the U.S. Army celebrate what they call the “St. Michael’s Day Jump.” 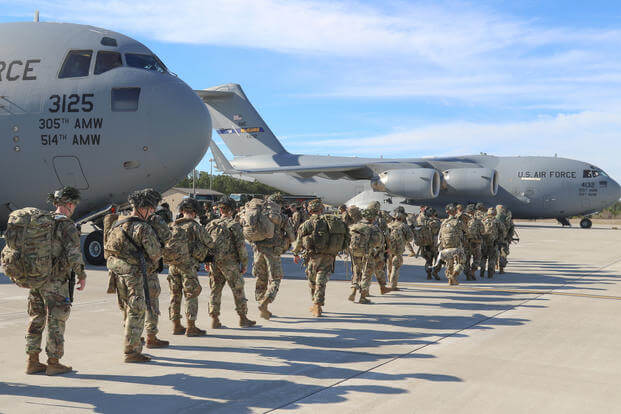 It turns out that paratroopers consider the great archangel their protector, an idea that has been around since inception of the famous airborne community.

Falling from the sky, and spreading their chutes, they like to think of themselves, in some ways, as arriving, warring angels who through their history have won battles and bailed out ground troops on numerous occasions. Their entire mission is to respond to crisis areas anywhere in the world within eighteen hours (the division has 750 planes!).

A book about the division is even entitled The Sword of St. Michael.

During World War One, the 82nd was critical in securing victory over Germany — one of the greatest manifestations of evil in recorded history, as James E. Day points out in Saint Michael the Archangel.

It is interesting how open many in the military are to the spiritual side — perhaps because they brush up against their own mortality, as can paramedics and police, who also consider Saint Michael their patron (along with mariners, doctors, and grocers).

One of the unit’s and America’s first major deployments and victories during the First World War came at a military salient in France called Saint-Mihiel. In the Old Testament, the Archangel Michael is the protector of Israel. In Islam, Michael, sometimes spelled Mīkāl or Mīkāʾīl, is the angel of mercy, feeding the infirm while commanding rain and thunder.

Is Michael the angel depicted in the third Fatima secret?

That secret message — really a vision — entailed an angel with a flaming sword, just as Michael is often portrayed in art and statues, although in the case of Fatima ready to set the world ablaze as a minister of God’s Justice.

Recall that Sister Lucia dos Santos’s description of the third secret said, “After the two parts which I have already explained, at the left of Our Lady and a little above, we saw an Angel with a flaming sword in his left hand; flashing, it gave out flames that looked as though they would set the world on fire; but they died out in contact with the splendor that Our Lady radiated towards him from her right hand: pointing to the earth with his right hand, the Angel cried out in a loud voice: ‘Penance, Penance, Penance!.'”

Consider that in the vicinity of Fatima around the fourteenth century a knight named Nuno was headed for Aljubarrota when he spotted a small church dedicated to Mary in what is today the county of Ourem. Getting off his horse, Nuno entered the church and knelt before the altar, invoking Mary before heading into a great battle between Portugal and the Castillian army, which outnumbered his force.

After the prayers, the knight marched to battle and while passing through the village of Fatima felt a heavenly presence.

The horses suddenly lowered themselves as if to kneel and a number of knights claimed to see angels, including the Archangel Michael.

Invoking him, they then went on their mission and claimed victory on August 15, feast of Mary’s Assumption.

It was in this very area half a millennium later, in 1915, 1916, and 1917, that Lucia dos Santos would see a similar angel identified as the “Angel of Portugal” but thought by many to have been Michael.

That’s in the same chapter as the “woman clothed with the sun” — recalling the sun miracle on October 13, 1917, at Fatima, which was also the thirty-third anniversary of Pope Leo’s XIII revelation that inspired his revision and promotion of the St. Michael Prayer.

Sounds too coincidental to be a “coincidence.”