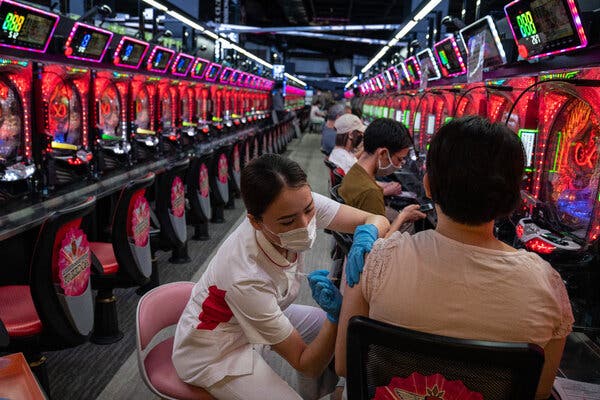 For many months we’ve wondered at how covid runs in cycles: that in the UK, illnesses could be absolutely rampant, then rapidly faded. The same for India. The same for some other countries.

Yes, the weather can have an effect (right now increased indoor activity  may be fueling the rise in northern states) and yes, health measures have mitigated the spread.

But why the radical drops — also in states such as Texas and Florida and others that had huge surges, followed by precipitous decline?

It nearly seems like the virus comes, hunts out the susceptible, all but conquers, then, satisfied with its havoc, moves on. That has happened in virtually every state. It’s a demon that needs its satiation.

We’ve long wondered, however, if something more fundamental might be at work, something more familiar to the world of DNA and RNA — namely, that the “fadeaways” are also caused by mutations: random alterations in their genetic composition that make them less lethal or less transmissible (or both). The reason we long have pondered the notion is that the more they are transmitted, the more viral genes are susceptible to “copying” error, and most such errors — mutations — make them less harmful. It is the ones doing the opposite that, understandably, grab our attention, wreaking said havoc.

Covid is not to the point, for sure, of fading into the sunset.

But there is good news on this front. It comes from the Orient. It may even prefigure the coronavirus’s final trajectory. “Japan’s fifth wave of Covid-19 has disappeared so dramatically that some scientists are puzzled as to why it happened,” the RT news site recently reported. “One team suggests the highly infectious Delta strain mutated into extinction on the island nation.

“In mid-August, Japan experienced a peak in Covid-19 infections, recording over 23,000 new cases per day. Now the metric is just around 170, with deaths attributed to the disease mostly remaining in single digits this month. The decline has been attributed by many to high vaccination rates, public acceptance of masks, and other factors, but some researchers say the drop was uniquely significant, compared to other nations with similar conditions. Ituro Inoue, a geneticist at the National Institute of Genetics, believes that Japan had the good fortune of witnessing the Delta strain mostly rooting out other variants of the SARS-CoV-2 virus before then eradicating itself. He explained his team’s theory to the Japan Times newspaper this week.”

In that second newspaper, he said RNA viruses, like the one causing Covid-19, tend to have a very high mutation rate, which helps them quickly adapt to changes in the environment. However, this opens the door for a so-called “error catastrophe,” when bad mutations pile up and finally cause the full extinction of a strain. States the report, a bit technically, “The protein nsp14 appears to offer a form of error proofreading that helps the virus genome to stay below the threshold of the ‘error catastrophe.’”

A “catastrophe” for the virus, of course, is the opposite for those of us haunted by it.

Genetics — something going on in the RNA — may also be at work, along with a rural outdoor way of life, with the mysteriously low rate of covid in Africa.

And so we have another prayer target and intention, that there be “catastrophic” mutations in the coronavirus, especially the pernicious Delta variant, as we enter the cold season, at the same time that we pray and rely on the guidance of those God has gifted with overseeing public health, while having the freedom to discern what is best for our own bodies and families.

[resource: The God of Healing]