Missed amid the growing and understandable uproar over sexual abuse in the clergy — and of late, among the hierarchy — is that it’s part of an overall intensification everywhere in all segments of culture and society of evil. Darkness is rising and deepening.

This is true in our families, at the workplace, on the road, on the internet, in stores, and yes in church. Discord. Dissatisfaction. Antagonism.

Where there are evil spirits, those spirits are gaining momentum — power.

It’s part of the test of the times in which we live and can largely be traced to the 1940s-to-1960s, when such spirits began to move through music, entertainment, academia, sexual mores, art, education, media, personal relationships, families, politics, science — especially science — and oh yes religions of humankind in a major way.

That intensification has been noticeably ratcheted up (in a big way) in the past few months and will continue to vitiate our institutions.

Its most overt manifestation is in pride — arrogance — which, in our dear, beleaguered, and targeted clergy, manifested as an elitism, a distance from the flock, a feeling of elevation, when it is the Host — not the priest — who should be elevated; it grew as a throne-like chair replaced the tabernacle behind the altar; it manifested in intellectuality; it manifested (this clerical superiority) in the feeling, at its incredible extreme, that Catholic youngsters (altar boys, seminarians) were there for sexual service.

Arrogance does not come in a much greater form than that — nor does evil — and the situation was widespread.

While many Catholic commentators now toss back and forth names of cardinals and bishops, of Vatican policies, of who knew what, of what new rules and regulations should be put in place, in how the matter should be adjudicated — discussing bishops as if this is politics — they miss the key wellspring: that simple invasion of demons.

There would be no such surprise — and no traumatic discouragement — if such folks had not dismissed the mysticism that predicted it.

One can take the example of Our Lady of LaSalette.

Virtually never mentioned by the Catholic “media” and “intelligentsia,” by the “pundits,” by the Church critics (a harsh sort, these days), the LaSalette revelations had foreseen that the day would come when “the Church will be in eclipse, the world will be in dismay.”

She had said the “holy places” would be “in a state of corruption.”

She prophesied that “many convents are no longer houses of God, but the grazing grounds of Asmodeas [a major demon, especially of the New Age] and his like.” (Did not many nuns — many convents — turn modernistic and New Age?)

It warned, did LaSalette, that many people, “even priests,” would  “not have been guided by the good spirit of the Gospel which is the spirit of humility, charity, and zeal for the glory of God.”

And what about that crisis: the rarity in even spotting a nun in habit in our time.

Churches, said LaSalette, “will be locked up and desecrated.”

Another crisis: closed parishes, with some churches turned into condos, museums, ballrooms, theaters, or even bars; in one case, a strip club!

Now, some of this pertained to what happened under Communism; some, what occurred under Hitler. Remember, it was uttered in 1846.

But it also clearly pertained to the long-term future and, it appears, our own era. At the root: the rise of a False Church within the True Church, one built not on the charisms of Christ but intellectual pretension.

Don’t you wish our Church would have heeded the Blessed Virgin Mary when she said, “May those in charge of religious communities be on their guard against the people they must receive, for the devil will resort to all his evil tricks to introduce sinners into religious orders.”

And so came the flood of homosexuals in clerical subterfuge — often, deceived themselves.

No wonder some of the messages from LaSalette were officially approved and others — such as those above — held in limbo or dismissed.

“The chiefs, the leaders of the people of God, have neglected prayer and penance, and the devil has bedimmed their intelligence,” said the Blessed Mother, so very wisely, with such prescience.

Have we not borne witness to this?

How many, inside and outside the Church, have been blinkered by the enemy — have developed a false intelligence (based on man, instead of God, Who is not theology but Spirit).

“Woe to the priests and those dedicated to God who by their unfaithfulness and their wicked lives are crucifying my Son again!” Our Lady said — while also offering great encouragement to the many good priests and followers of the Faith, for this great onslaught of evil will in the end be defeated — soundly.

So why the surprise? Scripture predicts the same.

But now, said the prophecy, Enoch and Eli will come, “filled with the Spirit of God. They will preach with the might of God, and men of good will will believe in God, and many souls will be comforted. They will make great steps forward through the virtue of the Holy Spirit and will condemn the devilish lapses.”

The Mystical Church will supplant the False One that, in too many parishes, took over the altar. Piety will replace intellectualism.

And so it is: the great promise — and certainty — of the future is that as great as darkness is, greater will be the Light. No matter how dark, all it takes is a little illumination.

We are going through a good breakdown, a breakdown of falsity, a purification.

Oh, the Church, the predicted crisis, the dilemmas that are a surprise and shock only to those who dismissed prophecy.

The Church will survive, fully rebound, even prosper — once, after these trials (more to come!), it returns to the simplicity, prayerfulness, and humility of Jesus. 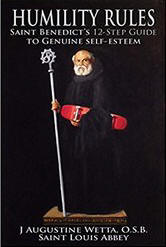