While priests abusing Catholic young was already headed upward — a path begun in the early 1950s — it exploded immediately after 1965, the year the Church, transforming itself after Vatican II, removed the Prayer to the Archangel Michael from Mass, Catholicism’s most potent shield against the enemy.

The prayer’s liturgical placement had been initiated with Pope Leo XIII, who sometime between 1884 and 1886 had a legendary mystical experience during which it was indicated to him that the devil would have enhanced powers to attack the Mother Church of Christianity.

The practice of reciting the prayer and the other ones instituted by the holy Pope Leo after Mass was officially suppressed in 1964 — ironically, on September 26, just days before the archangel’s feast day — by an Instruction Inter oecumenici which came into effect on March 7, 1965.

Removing the obligation to recite this prayer (along with the three Hail Marys, the Hail Holy Queen, and the prayer for the Church) after Low Mass did not mean forbidding its use either privately or publicly, but it was all but lost to the Church-at-large. Forms of Low Mass itself ended in 1970.

The prayer is still not widely recited at Mass today, though Saint Pope John Paul II urged the faithful to keep praying it in 1994 — immediately after an upsurge in abuse reports but as such cases headed on a sharply downward trend, soon leveling off. Last October Pope Francis, in the midst of new headlines about abuse, generated by a Pennsylvania grand jury report and the scandal of Cardinal Theodore McCarrick, similarly petitioned all faithful to recite it.

Statistics and graphs can be manipulated in many ways. But data assembled in a report by the John Jay College of Criminal Justice commissioned by U.S. bishops more than a decade ago [below] show the trend after 1965.

One can argue that the attacks of the Church were hardly confined to internal infiltration by the devil: Leo XIII was Pontiff at the end of the nineteenth century, which saw massive social and ecclesial changes and reforms. In particular, Pope Leo reigned during the end of the Papal States, the central Italian kingdom once ruled by the popes, and the emergence of republican and democratic forms of government. More importantly, the Church would come under existential threat during the rise of Communism — which led to millions of Catholic deaths in places such as Ukraine — and the dire threat of Hitler, who wanted to destroy the Vatican itself.

The 1960s — and once more, particularly the years immediately after 1965 — saw the inundation of Western society by “free” sex, recreational drugs, iconoclastic music, contraception, political rebellion, radical feminism, homosexual rights, occultism, louche public discourse, lascivious movies, and abortion. It is not difficult to connect the dots.

But no segment of society was lashed harder, as the standardbearer of morality, than the Church, which in modernized nations was flooded by gay seminarians.

As the John Jay report noted, “If the yearly ordination totals for diocesan priests accused are compared to the overall number of diocesan priests ordained in that year, the percentages of accused priests range from a maximum of almost 10% in 1970, decreasing to 8% in 1980 and to fewer than 4% in 1990. When the incidents recorded in the surveys are tallied for each year of occurrence (of each incident) from 1950 to 2002, the resulting figure shows that 75% of the events were alleged to occur between 1960 and 1984.”

Despite recent publicity that has made it seem as if the number of abusive priests is higher than ever, the opposite appears to be true.

For example, last week there were headlines from a newspaper in heavily-Catholic Green Bay, Wisconsin, announcing that there were forty-seven abuse priests there. It was only in the eleventh paragraph of a news article, however, that readers learned, as the news item put it, that while sixteen of the priests are still alive, “no current priests serving in the diocese had known substantiated allegations against them.”

The now-famous grand jury report in Pennsylvania had an extraordinary list of abuse cases, a good number still living, but most retired and many dead; one priest cited by the attorney general was born in the 1869.

While the problem of homosexuals in the clergy remains an acute crisis, when the total number of priests in religious communities who have had allegations made against them is presented as a percentage of all religious priests in ministry, the percentage accused of child sexual abuse is 2.7 to five percent.

This is all said for the sake of perspective, as well as an urgent call to reinstate the potent prayer. 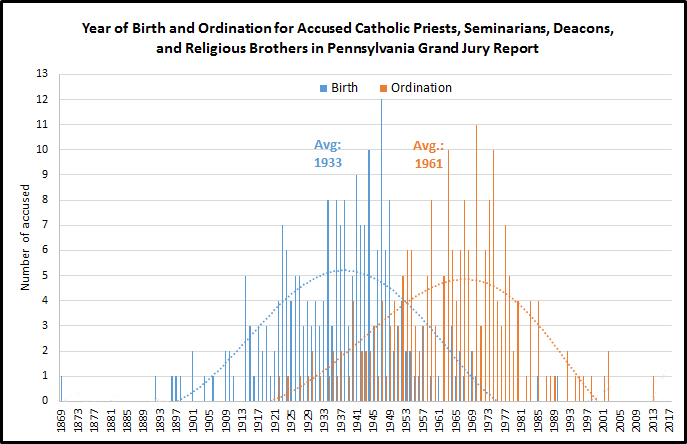 St. Michael the Archangel,
defend us in battle.
Be our defense against the wickedness and snares of the Devil.
May God rebuke him, we humbly pray,
and do thou,
O Prince of the heavenly hosts,
by the power of God,
thrust into hell Satan,
and all the evil spirits,
who prowl about the world
seeking the ruin of souls. Amen.

O glorious prince St. Michael,
chief and commander of the heavenly hosts,
guardian of souls, vanquisher of rebel spirits,
servant in the house of the Divine King
and our admirable conductor,
you who shine with excellence
and superhuman virtue deliver us from all evil
, who turn to you with confidence
and enable us by your gracious protection
to serve God more and more faithfully every day.

A Litany of St. Michael

[Repeat pray for us after each invocation]
Holy Mary, Queen of the Angels,
St. Michael, the Archangel,
Most glorious attendant of the Triune Divinity,
Standing at the right of the altar of Incense,
Ambassador of Paradise,
Glorious Prince of the Heavenly armies,
Leader of the Angelic hosts,
The standard-bearer of God’s armies,
Defender of Divine glory,
First defender of the Kingship of Christ,
Strength of God,
Invincible Prince and warrior,
Angel of Peace,
Guide of Christ,
Guardian of the Catholic Faith,
Champion of God’s people,
Guardian Angel of the Eucharist,
Defender of the Church,
Protector of the Sovereign Pontiff,
Angel of Catholic action,
Powerful intercessor of Christians,
Bravest defender of those who hope in God,
Guardian of our souls and bodies,
Healer of the sick,
Help of those in their agony,
Consoler of the Souls in Purgatory,
God’s messenger for the souls of the just,
Terror of the evil spirits,
Victorious in battle against evil,
Guardian and Patron of the universal Church,

V. Pray for us, O glorious St. Michael,
R. That we may be made worthy of the promises of Christ.