It’s in the news this week, even at the White House.

We speak here — of course, what else? — about that phantasmal viral scourge called covid-19.

The other day a Houston doctor who praises hydroxychloroquine and says that face masks aren’t necessary to stop transmission became a sensation on the internet, garnering tens of millions in views on Facebook Monday alone. Donald Trump Jr. declared the video of Dr. Stella Immanuel a “must watch,” while President Donald Trump himself retweeted it. It immediately outdid — and by far — the last similarly “viral” video, Plandemic. 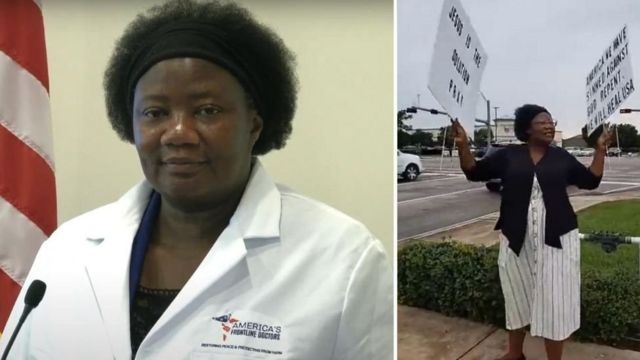 The secular press was quick to jump on this, citing other unorthodox beliefs of Dr. Immanuel’s. Those include her hypothesis that at times gynecological afflictions (cysts, endometriosis) are caused by sexual interactions in dreams with “demons and witches.” Perhaps she’s not as nutty as the media are trying to portray her.

One must admit, though, that some of her claims can tug even the most open-minded to the limits of elasticity. For instance, Dr. Immanuel alleges that DNA from aliens is being used surreptitiously in current medical treatments, and that scientists are cooking up a vaccine to prevent people from being religious (not that they wouldn’t dearly love to). She also thinks “reptilians” and other extraterrestrials clandestinely run our government. Yes, quite a reach, and her video has been removed by both Facebook and Twitter as bogus, while Trump Jr.’s Twitter account has been temporarily frozen.

And yet, at the same time — again, this week, to show how unpredictable and topsy-turvy and far-out our times are — The New York Times, paragon of that same scoffing secular media, has carried another report on so-called “UFOs.” It was just two years ago that the newspaper, once America’s most august, revealed Navy footage of “tic-tac” UFOs over the Atlantic and Pacific that the military could not and cannot explain.

Earlier this week, it followed up with a story hinting that there is secret physical evidence of alien crashes.

And in answering questions of whether he believes that aliens are visiting, the newspaper’s key reporter on the topic, Ralph Blumenthal, said this week — around the same time as Dr. Immanuel’s appearance: “Our latest article provided a more daunting set of challenges, since we dealt with the possible existence of retrieved materials from U.F.O.s.

“Going from data on a distant object in the sky to the possession of a retrieved one on the ground makes a leap that many find hard to accept and that clearly demands extraordinary evidence.

“Numerous associates of the Pentagon program, with high-security clearances and decades of involvement with official U.F.O. investigations, told us they were convinced such crashes have occurred, based on their access to classified information.

“But the retrieved materials themselves, and any data about them, are completely off-limits to anyone without clearances and a need to know.”

That’s quite a statement from a publication that for decades offhandedly dismissed the idea of extraterrestrials, psychics, and for that matter anything ultramundane (including miracles).

What are we to think? Are UFOs from another civilization “out there,” or a dangerous demonic deception? In other words, the same demons Dr. Immanuel frets about? (Yes, spirits can materialize physical things.)

We have no idea if there is life on other planets. It wouldn’t upset our notion of God if there is. He created all the universe. We do know that many if not most substantial “alien” encounters seem demonic in certain regards (replete with those dark slanty voodoo eyes, their ability to walk through walls, and the smell of sulfur).

Here we come back to the pandemic: As noted here before, in the Middle Ages Church leaders thought what we now call UFOs were evil spirits in the air and were involved with the great Black Death.

More recently, Evangelical and Pentecostal types in Africa, the U.S., and New Zealand have postulated the same for coronavirus.

One, Emmanuel Makandiwa, who has a massive following in Zimbabwe and elsewhere on the Dark Continent, long ago — in 2015 — predicted a pandemic due to a “demon on a rampage.”

Halfway around the globe, in New Zealand (we’re told, this time by a tabloid, the London Mail), Brian Tamaki, another controversial Pentecostal preacher, likened covid-19 to ebola, bubonic plague, and cholera — saying the outbreak was “energized by demons” to punish non-believers. “Satan has control of atmospheres unless you’re a born-again, Jesus-loving, Bible-believing, Holy Ghost-filled, tithe-paying believer,” he pronounced to a crowded hall of followers.

What about faithful, God-fearing Christians who have been stricken? Priests. Bishops. Cardinals. Those nuns in Michigan! And a good number of Evangelicals (including ones who defied local regulations)?

That’s another mystery for you to discern.

Meanwhile, we’ll file all of the above in our “suspense account.”

It seems much is about to revealed on many levels.

Major change and revelations are coming.

Odds and ends, in an odd, often unfathomable, time indeed.