Not often in modern media times has there been more papal scrutiny.

Smack in the wake of the extraordinary, and almost cataclysmic, revelations of scandal in the U.S. — as well as Chile — comes a trip to Ireland, where the clergy sexual abuse issue has been front-and-center for the past several years and where even the president of the country is demanding admissions from the Holy Father.

How will it play out? Is it Mary to the rescue? (The Pope always prays to her at St. Mary Major in Rome before trips, and will pray at the very start of this trip at one of the world’s most famous apparitions sites, Knock, in western Ireland.)

Most critically: how will the faithful react?

The Holy Father, saddled with abuse charges dating back seven decades, arrives Saturday for the World Meeting of Families, a conference that won’t hear from previously scheduled speakers Cardinal Sean O’Malley of Boston and Cardinal Donald Wuerl of Washington, D.C., who bowed out due to the cresting crisis in their dioceses and seminaries. What the Pope says or doesn’t say — especially during airplane or other press conferences — could be pivotal not only to the perceived success or failure of this trip but also the Church’s entire handling of the searing, long-lasting, and now truly threatening crisis.

From the Irish Times: 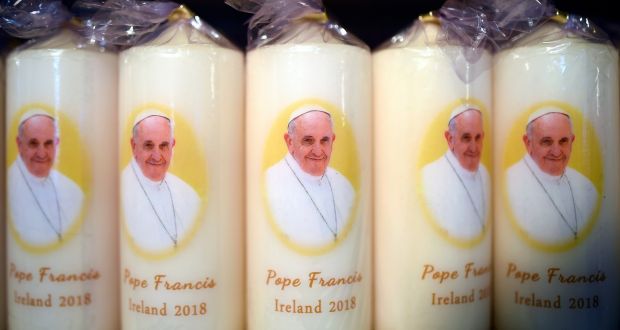 When Jorge Mario Bergoglio chose the name Francis for his papacy, he was asking Catholics to make a connection to the medieval religious revolutionary Francis of Assisi.

Early in his spiritual pilgrimage, the original Francis heard the icon of the crucified Christ in the Italian church of San Damiano speak to him. It said “Francis, Francis, go and repair My house which, as you can see, is falling into ruins.” When the Pope arrives in Ireland this weekend, he will find a Catholic church not just falling to ruin, but in some respects beyond repair. He will be greeted with joy by the faithful, but few, even among them, will expect him to be able to fix an institution that has been shaken to its very foundations.

The pilgrims still come, many on foot. The faithful still fill their plastic jugs with the healing holy water. The sick are anointed with oil. And by the thousands, they reach out to rub their rosary beads on the stone wall of the old chapel, where an apparition of the Virgin Mary appeared one stormy twilight in 1879, witnessed by 15 respectable residents of the village.

Next Sunday, during a two-day visit to the country, Pope Francis will make his own pilgrimage to the Basilica Shrine of Our Lady of Knock, Queen of Ireland. He will see a modern-day complex with new youth and counseling centers, a museum and a hotel, surrounded by acres of manicured lawn, everything wired with fiber optics, WiFi and high-end acoustics for 21st-century supplicants. But Knock Shrine today is an island of faith in a sea of troubles for the Catholic Church in Ireland, which has seen its flock flee in droves and the authority of its once all-powerful clergy shaken — first as the country’s courts and legislature overturned bans on contraception, homosexuality and divorce and, more recently, in two stunning referendums. 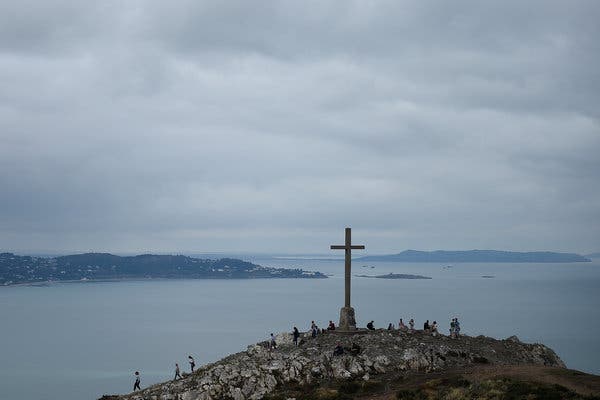 MURRISK, Ireland — On the sacred mountain where St. Patrick is said to have fasted before banishing Ireland’s snakes into the sea, Geraldine Reilly walked past grazing sheep, a statue of the nation’s patron saint and a sign informing pilgrims how to gain indulgences through praying “for the intentions of our Holy Father the Pope.”

Ireland has had no shortage of changes over the last 40 years. The Irish church was once the bedrock of European Catholicism, exporting priests around the world, while shaping its home country’s national identity, laws and culture. In 1979, when John Paul II made the last papal visit here, divorce, homosexual acts and abortion were all illegal. But in the intervening decades a clerical sexual abuse scandal, the tearing of children away from unwed mothers and other awful abuses against vulnerable Catholics have hastened a blooming of secular modernity and the evaporation of the church’s authority. Francis comes now to a country that was Europe’s first to legalize gay marriage by a popular vote, that has a gay prime minister, and that in May overwhelmingly voted to strip a ban on abortion from its Constitution.

“The clock is ticking for all of us in Church leadership. Catholics have lost patience with us and civil society has lost confidence in us,” Cardinal Sean O’Malley, the archbishop of Boston, who has been advising the pope on the issue, said in a statement last week.

The archbishop of Dublin, Diarmuid Martin, added: “It is not enough just to say sorry. Structures that permit or facilitate abuse must be broken down and broken down forever. “Why does this not happen? Why must such a simple affirmation have to be repeated so often?” he said at a weekend mass in the Irish capital.

More than 1,000 nurses, doctors and paramedics will be stationed in Dublin’s Phoenix Park during the Papal Mass on Sunday 26 August. Being prepared means that there will even be a mortuary, so that if anyone dies their body can be held until undertakers get to the scene.

Babies might be born too: At the last World Meeting of Families in Philadelphia 2015, six women were whisked to hospital to give birth. The organisers are expecting a total of 500,000 people to come to Phoenix Park to see the Pope.

VATICAN CITY (Reuters) – Pope Francis will meet victims of clergy sexual abuse during his trip to Ireland this weekend, the Vatican said on Tuesday, as scandals in several countries mire the Catholic Church in its worst credibility crisis in more than 15 years.

On Monday, Francis wrote an unprecedented letter to all Catholics, asking each one of them to help root out “this culture of death” and vowing there would be no more cover-ups. Spokesman Greg Burke told reporters at a briefing on the Aug. 25-26 trip that details of the meeting would not be announced until after it was over and it would be up to the victims if they wanted to speak afterwards.

DUBLIN – Just before Pope Francis is due in Ireland, his top advisor said that the Catholic Church has been “deeply afflicted” by clerical sexual abuse scandals, that the Church’s “first responsibility” is closeness to victims, and that the pontiff will bring Ireland a message of “hope.”

“I believe that we have been, and continue to be, deeply afflicted by this phenomenon that’s had a devastating impact on the witness of the Church,” said Italian Cardinal Pietro Parolin, the Vatican’s Secretary of State. “The Pope always has insisted and continues to insist on the fact that our first responsibility, our first commitment, is to be close to the victims, to help them in a way that allows them to ‘rebuild’ their lives,” he said.