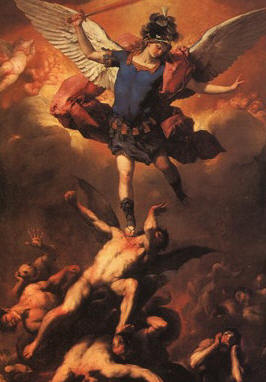 On the upcoming feast of the archangels and in particular Michael it seems appropriate to meditate on what has happened to our Church since the Prayer to the Archangel Michael was removed from the end of Mass; to contemplate, in light of the priest shortage, how challenged our Church is when it comes to casting evil out; and to appreciate how powerful this angel is — not only with deliverance but also in assisting the souls in purgatory.

Contemplate St. Michael. Invoke him! Never was he more necessary.

When we mention a “challenge” in the Church we are speaking about the dire lack of exorcists. Many dioceses and even whole states (and in at least one case, a country) function without one. For years New York City — with a population of more than eight million — had just one (at least in an official capacity).

That dearth is brought home when we hear from those desperately seeking a priest to rid a demon. Often, when they call diocesan offices, and leave a message, there is not even a return call. Recently we were approached by a Catholic woman who had been a practicing witch and was now struggling to rid herself of that darkness — in ferocious combat — but could find no priest in her own city. She wondered if we knew one in a neighboring state or diocese.

We got the same question the same day from a woman who explained to us that she was visibly “manifesting” evil spirits but unable to find counsel. Her dilemma: the one priest who had practiced deliverance was now forbidden to further minister and even to give advice. Such matters, it seems, have been turned over to psychologists.

This is a real crisis in the Church, and we urge everyone to write their bishops about it. The world’s foremost exorcist, Father Gabriele Amorth, has often decried the shortage of exorcists and so we wonder how many thousands in the U.S. and abroad, especially Europe — how many hundreds of thousands — are out there flailing against an invisible foe because they have no recourse in a Church founded on the greatest exorcist ever, Jesus Christ. St. Michael the Archangel, defend us against the enemy!

How we love this archangel. It was September 29, 2000, that we dedicated this website to his patronage.

At a cave in which he appeared (not far from San Giovanni in Italy), we recall watching a priest assist a young person who was expelling an evil spirit. (The picture below, left, is from the cave.)

There is real power against evil with Michael and yet we tend to forget him. It was after the dismissal of his prayer at the end of Mass that so much evil entered.

As for purgatory: we carry an incredible booklet called Unpublished Manuscript on Purgatory that is said to be the Church-approved revelation of a deceased nun in the 19th century to a living one and informs us of Michael’s role in the afterlife. 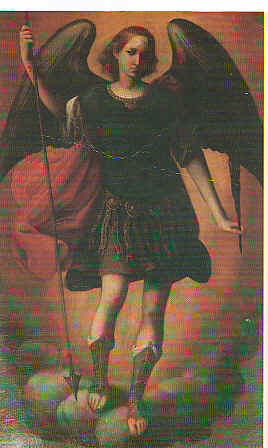 When asked how the feast of St. Michael is celebrated in purgatory, the deceased nun replied, “On that day St. Michael comes to purgatory and returns to Heaven with a great number of souls, especially with those who had been devoted to him in life.

“When the feast of a saint is celebrated on earth, he receives an increase of accidental glory in Heaven, even if he is not actually remembered on earth. He receives a special recompense in memory of some particular act or heroic virtue, or of some increase of glory, which he procured for God at a given time.

“This reward consists of an increase of accidental glory joined to the happiness which the memory of his work on earth causes him. The accidental glory which the Archangel receives is far above that of the other saints, because his glory is proportioned to the greatness of the merit of the recipient and also to the value of the action which merits the reward.”

Keep that role too in mind.

[see also: Archives: an experience with the Archangel Michael]