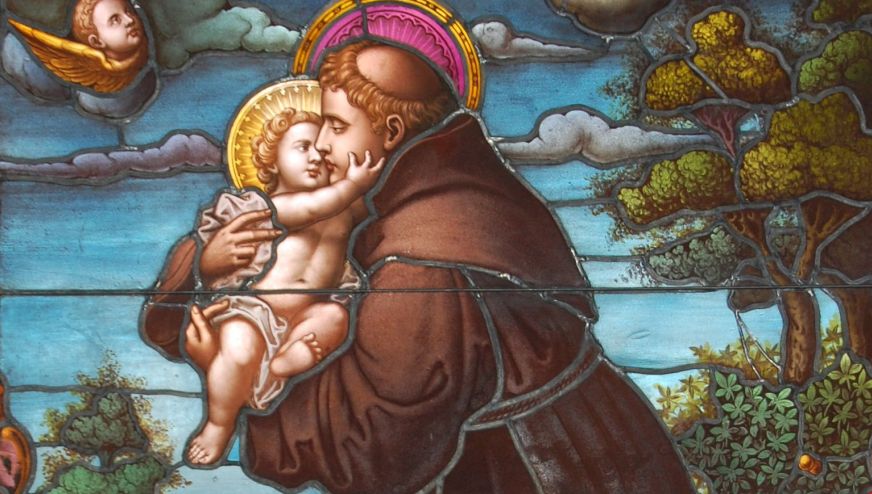 In the 13th century, a Portuguese woman who’d been demonically oppressed resolved to do the unthinkable by taking her own life by drowning herself in the Tagus River. On her way to the river, she passed a shrine erected in honor of the great orator and miracle-worker, St. Anthony of Padua. She stopped to pray, one last time. As she prayed, she saw St. Anthony standing before her, saying, “‘Arise woman, and take this paper, which will free you from the molestations of the Evil One.” Then he gave her a parchment inscribed with what is now known as the “Brief (i.e., “Letter”) of St. Anthony,” 1 and she was now free from demonic oppression and the desire to do away with herself.

News of this miracle spread, even to the King who asked the woman for the Brief. He placed it with the Crown Jewels of Portugal, which was fine for the King, but bad for the woman. After the Brief was no longer with her, she began to weaken and lapse, so the King made a copy for her that restored her to her healed state. Other copies of the Brief were spread to help the faithful fight the Evil One and remind them that Christ has conquered.

The Brief consists of a depiction of a Cross, and words which, forming a rhyme in the Latin, hearken back to Apocalypse 5:5, “And one of the ancients said to me: Weep not: behold the lion of the tribe of Juda, the root of David, hath prevailed to open the book and to loose the seven seals thereof.” The words of St. Anthony’s Brief are:

English version:
Behold the Cross of the Lord!
Flee ye adversaries!
The Lion of the Tribe of Juda,
The Root of David has conquered, alleluia!

The exorcizing proclamation is carried on the person or placed in homes. It is also used in more specific situations, such as that encountered by the French seamen who found their ship tossed by an angry sea during a storm off Brittany’s coast in 1708. One of the men wrote the words of St. Anthony’s Brief, and threw it into the sea with a prayer to the Saint. Immediately, the seas calmed and the sailors were saved.

The words of this Brief are good ones to use when feeling tempted by evil, oppressed by demons, and in general spiritual warfare.

As an aside, part of these words from the Apocalypse are also inscribed at the top of the obelisk that sits in St. Peter’s Square. The obelisk had been in Rome since A.D. 37, set up in what is believed by many to have been the site of the divisional wall (spina) of Caligula’s Circus, where Nero’s massacre of Christians took place in A.D. 67. Pope Sixtus V moved the obelisk to its present position in a move that

…celebrated the triumph of the Faith of Christ, St Peter and the apostles over pagan superstition. The proximity of the obelisk to the old basilica had always been resented as something of a provocation, almost as a slight to the Christian religion. It had stood there like a false idol, as it were vaingloriously, on what was believed to be the center of the accursed circus where the early Christians and St Peter had been put to death. Its sides, then as now, were graven with dedications to Augustus and Tiberius. On its summit was a bronze sphere believed to contain the ashes of Julius Caesar. When taken down, the sphere proved to be solid. Nevertheless, Sixtus had a bronze cross put in its place (in 1740, after repairs, a piece of the True Cross was inserted in one of the arms). Solemnly the pope had the heathen spirit of the obelisk exorcised. ‘Impio cultu dicatum’ he carved upon the base as a reminder of what the needle once represented, and ‘Ecce Crux Domini fugite partes adverase’ in proud defiance of Luther and the reformed Churches. 2

Footnote:
1 Other accounts say that she fell asleep, dreamed of St. Anthony, and awakened to find the Brief. I don’t know which is accurate.

Back to Being Catholic