From Forums of the Virgin Mary [rough translation]:

[SD note: The statements of local bishops during past six decades have ranged from forbiddingly negative to neutral, the latter in place at the current time. A brief summary of what various bishops in Santander have said and say is here and here; also here] 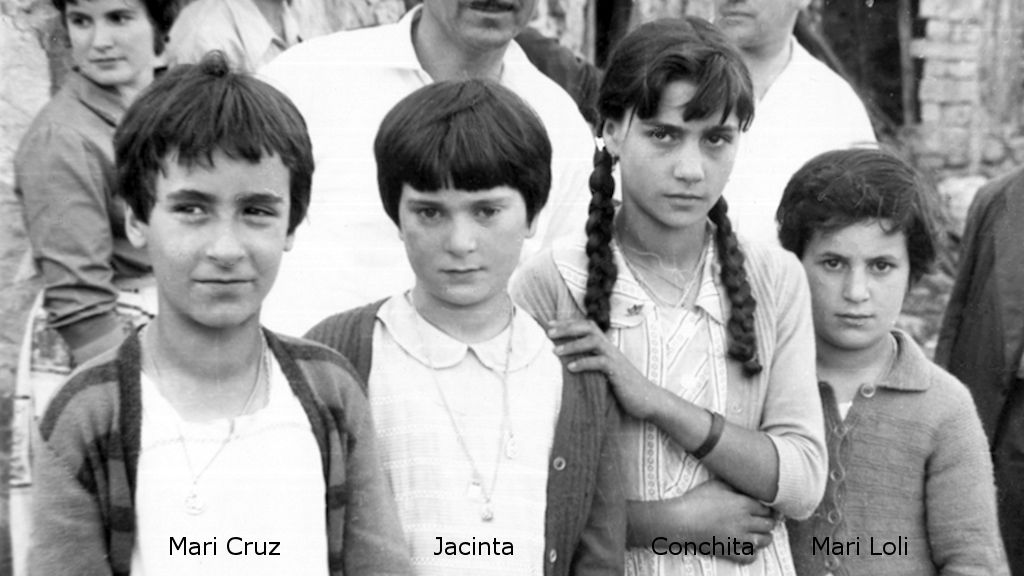 It is sixty years since the Garabandal apparitions.

They began on June 18, 1961, with the appearance [as at Fátima] of the angel to the four seer girls.

And that happened at a special time for the Church and the world.

The globe had already started a cultural revolution that gave rise to the hippie movement and the May 1968 Paris. Russia was successfully exporting Marxism all over the world. John XXIII had declined to publish the third secret of Fátima in 1960 and summoned the Second Vatican Council.

It was in this context that Our Lady allegedly appeared to four girls in a tiny town in Cantabria, as a continuation [in one view] of the apparitions she had made in Fátima in 1917.

On Sunday, June 18, 1961 at 8:30 p.m., the four seer girls of Garabandal are visited from heaven in preparation for the frequent visits that Our Lady will make to them until 1965. The girls are visited by an angel, who will later learn that it is Archangel Michael, who will prepare them for the visit of Our Lady, as happened in Fátima.

The names of the girls who see the angel and then the Virgin are likewise: Conchita, Mari Cruz, Mari Loli, and Jacinta.

They were picking some apples stealthily, when suddenly a very beautiful figure appeared to them, with a luminosity that did not hurt the eyes.

A curious detail that will be repeated on many other occasions when Jesus, or the Virgin, appear surrounded by an intense supernatural light that does not disturb the eyes.

Then without saying anything the angel disappears.

They run to church; another girl sees them and asks what is wrong with them; and without thinking they answer that they have seen an angel.

What they tell us about this angel is that he looked like a child of about 9 to 12 years old, with black eyes and an extraordinary look.

His suit was blue, not tight. His wings were long and as the color of fire (a shade the seers said was very pretty). The angel appeared on several occasions, but he did not speak and only made gestures to them. They would tell him things and he would respond with signs, if necessary.

The archangel appeared in the same place. 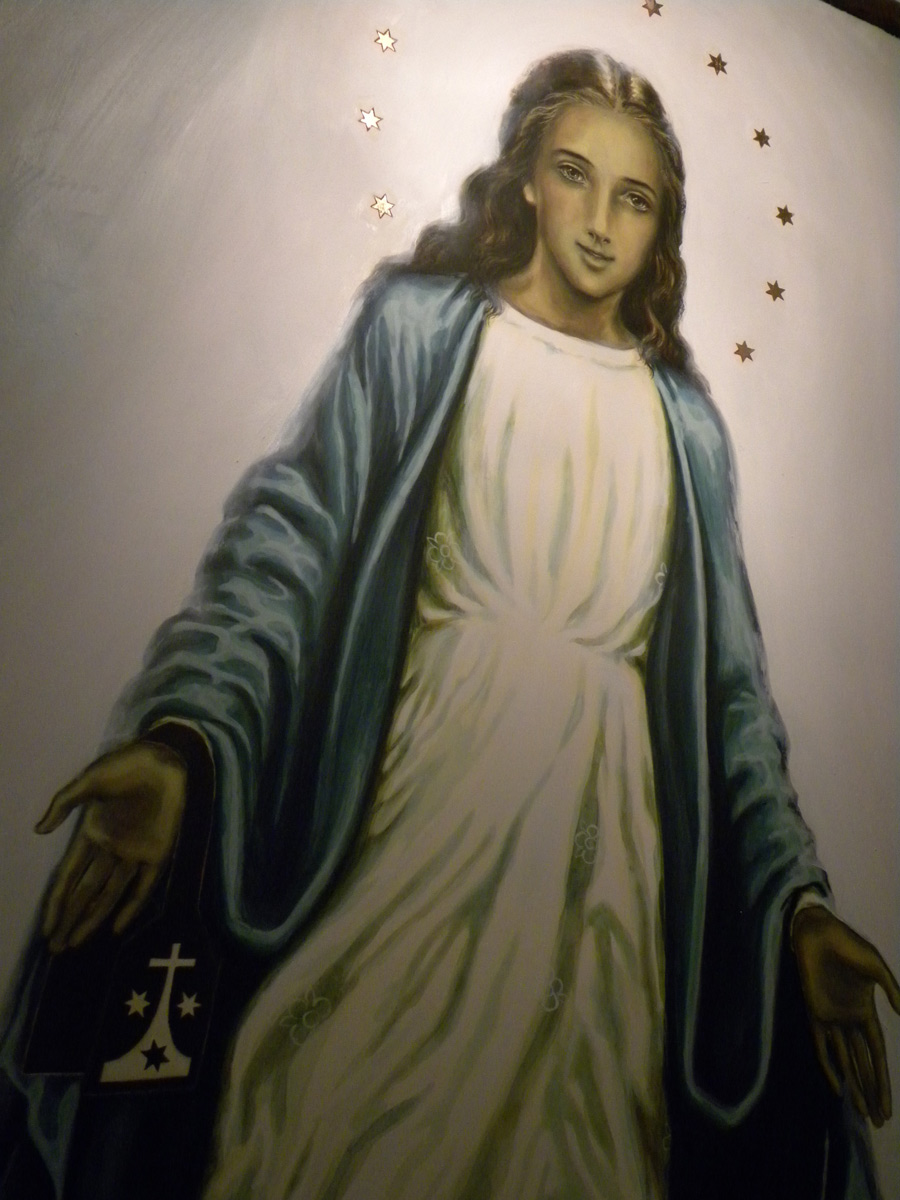 And he announced that on July 2, they would see Our Lady.

This was the beginning of the events in Garabandal.

The angel fulfilled the function of assistant to Our Lady and would later give the girls Communion in the mouth, partly similar — the announcement — to what had happened in Fátima.

Even the second message of the apparition, at the end, of June 18, 1965, was communicated by the angel to Conchita on behalf of María, perhaps because the Blessed Mother did not want to say something so strong herself.

We have made a more detailed video about the role played by the angel of Garabandal, the link of which is in the description of this video https://youtu.be/yxtvDF7E-QA

[Scroll down for continuation]

And there was a second prolegomenon.

Also at the end of June, the Sacred Heart of Jesus wanted to be present in Spain, accompanying the Archangel Saint Michael on the first visits to the girls.

While the other girls contemplated the angel, Jacinta saw Our Lord with a majestic bearing.

Standing on a cloud.

With His left Hand He showed her a Heart of intense red, which gave off golden and white rays.

And with His right Hand, Jesus Christ allegedly was beckoning for him to come closer. 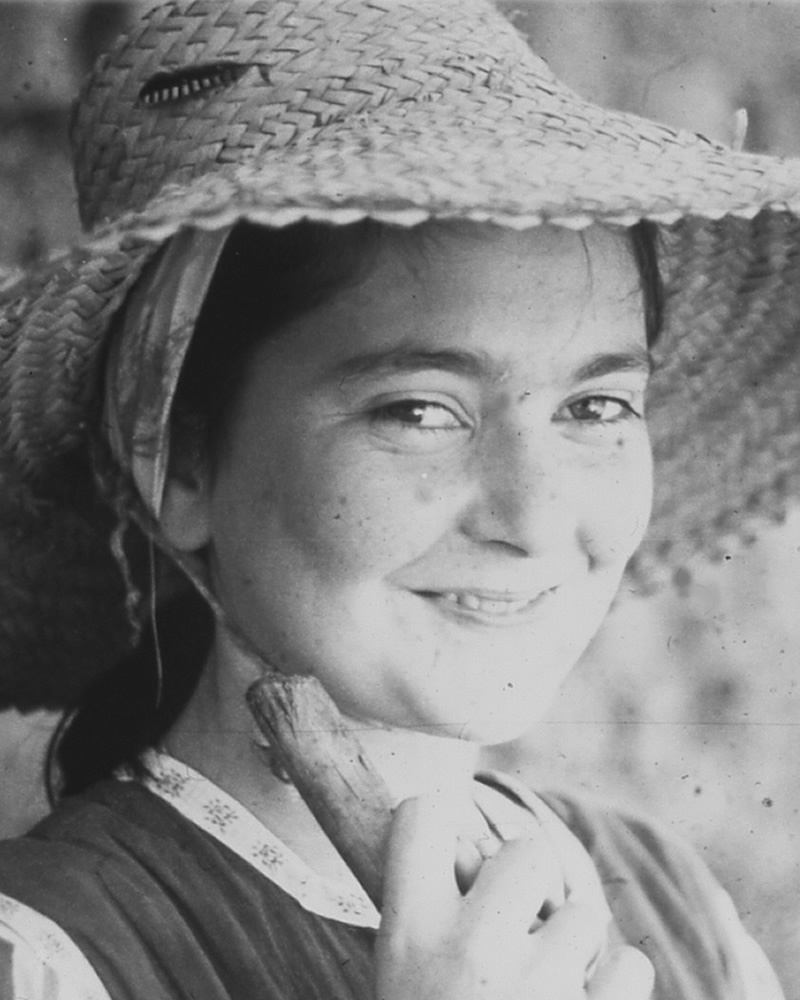 So Jacinta obeyed, dazzled by the beauty and splendor of the clothing, and even more so of the person of Christ.

His gaze penetrated to the depths of the soul and was imbued with an immense love.

He did not speak to her, but with His gaze 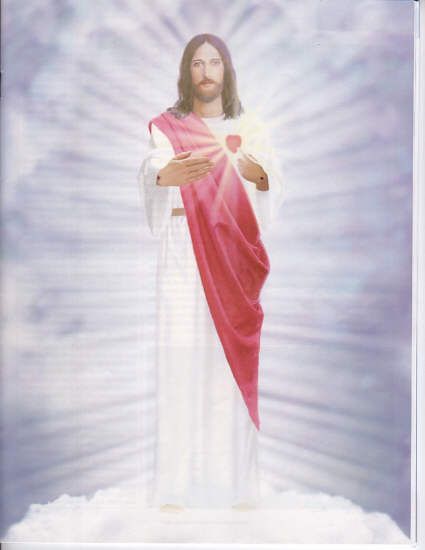 It was a look that was hard to bear, not out of fear, but because it penetrated to the soul.

The vision lasted for a few moments, but it left an indelible impression on Jacinta.

Two things impressed greatly: the look of Jesus and His majestic bearing.

And Jacinta says that she could not have been like this for a long time in front of Him because her soul would have gone with Him!

And what role did this apparition of the Sacred Heart play?

In the appearances of Jesus in different countries, He reveals to us His interest in getting closer to people. As a way of approaching all of humanity: through the eyes of the seer.

And on the other hand, the appearance of the Sacred Heart at the beginning was an endorsement of the angel’s appearances, which [perhaps] legitimized the events as coming from God.

This remained in the environment of the four girls and only became known publicly a long time later, causing a great impact on the people who heard it.

Both the vision of the angel and that of the Sacred Heart of Jesus were revelations that preceded the apparitions of Fátima.

At Fátima the angel appeared first three times before Our Lady.

And the conversations revolved around the Sacred Heart of Jesus and the Immaculate Heart of Mary.

So both the angel and the Heart of Jesus appeared before the Virgin to try to reach the girls’ souls and thus put a state of alert for what was going to happen.

But the relationship between Fátima and Garabandal does not stop there only.

Monsignor João Pereira Venancio, Bishop of Fátima, mentioned that the Blessed Virgin said goodbye in Fátima dressed as Our Lady of Carmel, in the final apparition after the miracle of the sun.

And on the other hand, there are some who believe Our Lady of Fátima said this phrase in her farewell, “until San Sebastián of Spain.” [For your discernment; such never has been verified.]

This was supposedly published in a Carmelite book published in Brazil in the 1930s, that is, 30 years before the events of Garabandal.

And as it was incomprehensible, that phrase supposedly was swallowed by history.

But in reality that phrase has immense value, because if true [and it is a very big “if”], it places the Garabandal apparitions decisively as the continuation of the Fátima apparitions.

Then from July 2, 1961, the apparitions of the Virgen del Carmen de Garabandal will begin.

As in Fátima, it will bring us a consoling content and emphasis on the prayer of the rosary.

In Garabandal the Virgin once again insists on reciting the Rosary, but this time she asks that it be prayed in a more leisurely way.

In both cases the message is a warning, because both groups of children, from Fátima and from Garabandal, see what will happen to humanity if they do not heed the Virgin’s messages.

In Fátima the little shepherds see how souls fall to hell, and in Garabandal the four girls will see what happens when Our Lady shows them the future punishment.

Both appearances were highly prophetic.

The Virgin of Fátima prophesied the triumph of Her Immaculate Heart, the arrival of Communism and its spread of errors throughout the world, and that the first world conflagration would end but a worse one would come if men did not stop sinning.

And Our Lady prophesied in Garabandal that Heaven would send a warning to enlighten the consciences of all the people of the world, that then she would do a miracle, and finally there would be a punishment.

Also in both appearances Communism has had a preponderant place.

At Fátima she warns of the arrival of Communism and the evils that it will produce in the world, and gives a formula so that these evils do not spread: that the Pope consecrate Russia to the Immaculate Heart of Mary in communion with all the bishops of the world.

Our Lady said in Garabandal that Communism would be generalized and that would be the keynote in the moments when the Warning happened.

But he was not referring to the Soviet Union-type political communism, but to what we now call cultural Marxism, what is dominating the West.

Both apparitions dedicate a significant part of their prophecies to the Pope.

In Fátima a martyred Pope is shown in the third secret, which seems to happen in the middle of a conflagration or persecution.

And in Garabandal Conchita hears in her interior the voice of Our Mother who reportedly tells her on June 3, 1963: «After this Pope, there are only three left; and then it will be the end of time» [Note: accounts vary.]

And then the Virgin specifies that there will be another Pope, but that this “would govern the Church for a very short time” and that is why she does not count it.

Both appearances will have a penitential, conversion message, but this is similar to many appearances.

The same as the predominance of white and blue colors in the Virgin’s clothing.

And the sadness of Our Lady because humanity is heading to the cliff and does not heed her warnings and advice.

Well, so far what we wanted to tell you about how the now sixty-year-old Garabandal apparitions began, and how their continuity that comes from the Fátima apparitions.

Ask yourself: what things have drawn your attention the most about these apparitions?