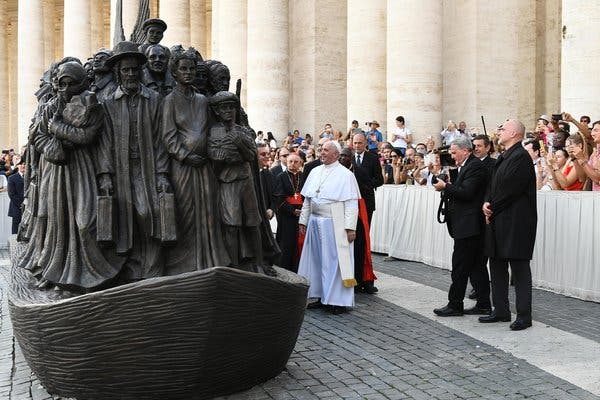 Pope Francis has always urged compassion and charity toward the refugees of the world. But on Sunday, during a special Mass on the 105th World Day of Migrants and Refugees, he unveiled a monument to migration in St. Peter’s Square as a homage to the displaced.

The work, “Angels Unaware,” by the Canadian artist Timothy P. Schmalz, depicts 140 migrants and refugees from various historical periods traveling on a boat, and includes indigenous people, the Virgin Mary and Joseph, Jews fleeing Nazi Germany and those from war-torn countries. It was requested by the Vatican’s Office of Migrants and Refugees and funded by the Rudolph P. Bratty Family Foundation. Francis said the statue had been inspired by a passage in “Letter to the Hebrews,” from the New Testament: “Do not forget to show hospitality to strangers, for by so doing some people have shown hospitality to angels without knowing it.”