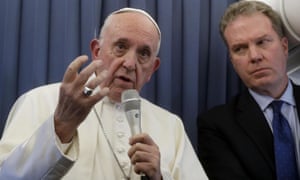 The Pope [flying back from Ireland] was asked by a journalist what he would say to parents who observe homosexual traits in their children.

“When it shows itself from childhood, there is a lot that can be done through psychiatry, to see how things are. It is something else if it shows itself after 20 years,” he said.

He added that ignoring a child who showed homosexual tendencies was an “error of fatherhood or motherhood.” However, when the Vatican later published the Pope’s answer, the reference to psychiatry had been removed.