The nomination and all but certain seating of Amy Coney Barrett as a Supreme Court Justice are fascinating on several fronts.

First and most obviously, it presents the opportunity for soundly overturning Roe v. Wade. While the Court already had a “conservative” majority, Catholic Chief Justice John Roberts was anything but a sure vote to do so, and another justice or so may have sided with Roe on purely legal principles.

Now conservative Christians rule the roost by a 6-3 margin, or soon will.

Is there any chance Barrett might not vote to overturn it?

It also presents Christians with a strong bulwark, at least for a time period, against the kind of infringements into religious rights that had developed under the previous White House Administration — making Catholic voters do things such as bake cakes for gay weddings despite religious — despite Biblical — precepts. Or making Catholic organizations, or trying to make Catholic organizations, provide for birth control or even abortion in employee health-care plans, including organizations run by nuns. We were headed toward the forced hiring of folks who violate traditional Christian morals (such as active heterosexuals who live together out of wedlock or active homosexuals and trangenders). Now such matters will head to a Court strongly in the grips of Justices who will vote by all odds to protect such rights.

This was critical. If Joseph Biden wins, his vice president and almost certainly a prime possibility for future president would be Kamala Harris, who would take the nation back to the atmosphere of the previous White House. Translation: Kamala is not very conservative-Christian friendly.

Importantly, Catholicism is suddenly very relevant politically. That never hurts. Packing the Supreme Court with pro-life defenders of religious freedom was a prime and in some cases sole reason many voted for the current occupant of the White House.

But there are other considerations to the elevation of Barrett.

It pushes to the fore the common ground Catholics and Protestants/Evangelicals and other Christian denominations share or should share. Barrett belongs to a religious community that includes “Roman Catholics, Lutherans, Episcopalians, Methodists, Pentecostals, Presbyterians and other denominational and nondenominational Christians,” according to its website.

Evangelicals, Pentecostal types, and Baptists who long have denounced Catholics for “Mary worship” and have called the Pope (whoever that may be at the time) an “anti-christ,” are seeing that when it comes to the real battles to be fought, when push comes to shove, Catholics are and always have been at the front lines of morality, and that all Christians need to be on the same side when the wolf is at the door. Non-Catholic Christians can stop pretending that “Catholics” are not “Christians.”

A fact often ignored: the Bible, so central to Evangelicals (as it should be), was formulated by Catholics. Many Evangelicals are now learning how deeply Christianity goes among Catholics. (In no denomination does it run as deeply.)

As a member of the small group of charismatic Catholics/Protestants/Evangelicals called People of Praise, Barrett has also thrust the charismatic aspect of Christianity — for instance, speaking in tongues, if they are like other charismatics and speak in tongues, and certainly much deliverance ministry — into the spotlight. A Justice who speaks in tongues? Who casts out the devil?!

This is fascinating not only for the benefit to the practice of such charisms (to those who perceive such benefits), but also in how her charismatic and ecumenical aspect will be received by archconservative or traditionalists who staunchly support pro-life Justices like Barrett but long have held charismatic Catholicism at arm’s length and outright disdain ecumenism. There are indications that Pope Francis is likewise charismatic.

The People of Praise website describes itself this way: “Our commitment is a full commitment, a commitment that involves our whole lives. We are not simply committing ourselves to certain activities or obligations, but we are committing ourselves to a relationship which reaches to everything in our lives. We may not do everything together or live together in one place, but we do put our whole lives in common and make them available for the mission the Lord has called the body to, and to the service of our brothers and sisters.” No controversy there. 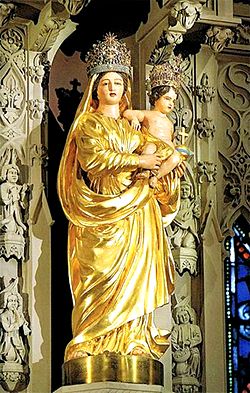 What a testament she is to the great state of Louisiana — a true stronghold for the Faith, inch for inch the most Catholic state in the U.S. (though Arizona and parts of Texas are quickly rising).

For certain, Louisiana knows how to raise devout and very Marian Catholics. It will be interesting to see if Barrett has a strong devotion to the Blessed Mother (Louisiana sure does!).

She’s from Metairie — near the shrine that houses Our Lady of Prompt Succor, who, it seems, has once more come to the rescue of this nation, at least in the way, hopefully, of Barrett.

Hats off to Louisiana. Hats off to Metairie and New Orleans, where we have been privileged to do a good number of retreats, one with the late great Archbishop Philip Hannan, who would be tremendously thrilled at what is now occurring, at least judicially.