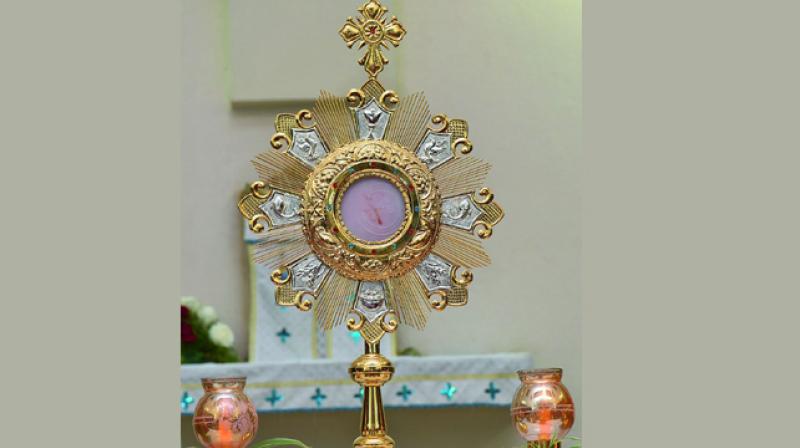 The Deccan Chronicle in India reports that a Host has bled. It ran the photo above.

This apparently (and allegedly) occurred at a school chapel.

Says the report: “Several faithful thronged St. Francis High School chapel in Secunderabad on Sunday after reports of a Eucharist miracle at the school’s chapel. The sacramental bread ‘bled’ after it was put up in the Monstrance and kept on the altar. The ‘oozing of blood’ was noticed in the afternoon by a group of six persons, including two nuns, who were praying in the chapel. October 2 being the National Intercession Day, the sisters from St. Francis Convent had organised an Eucharistic Adoration in the chapel from 3 p.m.”

The newspaper further quotes a witness named Sister Carmel as saying that after about ten minutes, she suddenly saw a red stain. “It seemed to be like a small scar. A couple of moments later, a drop of blood gushed out and spread all over the Host.”

For our considered evaluation.

Faithful “thronged” to the school on Sunday, said the report. Noted one adorer:

“If He is bleeding now, it is because of the sins of people and also a message to people that they should turn their backs on their sinful nature and come back to Him.”

Adds the newspaper: “There was no official announcement from the Archdiocese of Hyderabad.

According to sources, such incidents are known as apparitions and the Catholic church follows a proper procedure to declare it as a miracle after inquiring into it.