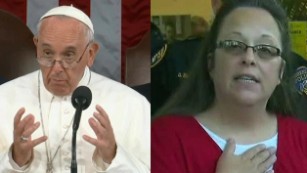 Even before Archbishop Carlo Maria Vigano called for Pope Francis to resign on Sunday, the two men had a history, and it wasn’t good.

Vigano, the former Vatican ambassador to the United States, angered some church officials in 2015 by arranging a meeting at the Vatican’s embassy in Washington between the Pope and Kim Davis, the Kentucky clerk who refused to sign same-sex marriage certificates. During his trip to the United States, the Pope had tried to stay above the country’s culture wars. Vigano foisted Francis right into the fray. The Vatican, which tried to distance the Pope from Davis, was displeased. Two years later, Francis quietly accepted Vigano’s resignation. On Sunday, Vigano struck back.