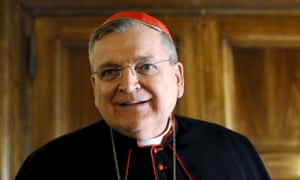 A powerful American cardinal who is engaged in a bitter feud with Pope Francis has met Matteo Salvini, the rightwing Italian nationalist who is a staunch supporter of Donald Trump and has praised Benito Mussolini.

The reported meeting between Cardinal Raymond Burke and Salvini, the head of the Northern League party, is a sign that intense divisions between traditionalists and the Pope are becoming increasingly political. Pope Francis’s allies in the church, who back his message of inclusion and support for immigrants, are speaking out against the US president’s travel ban against refugees and immigrants from majority-Muslim countries. Cardinal Joseph Tobin of Newark, New Jersey, who was recently promoted by Francis, called Trump’s executive order a “dark day” for America. Tobin has also suggested that Trump is a conman.