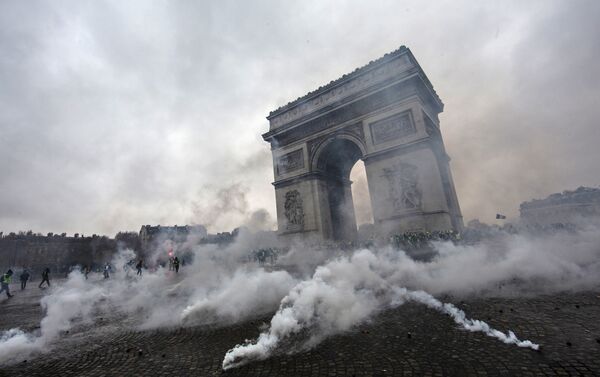 Less than a month ago, French President Emmanuel Macron staked his claim as the flag-bearer for globalism. In a speech to 60 world leaders at the Arc de Triomphe, he eulogized the United Nations and declared nationalism the “betrayal” of patriotism.

Last Saturday, tear gas and cobblestones flew in the same part of Paris as protesters trashed the iconic monument and demanded Macron’s embattled government withdraw a proposed fuel-tax increase. For the first time in his presidency, he backed down. It was a humbling moment for opponents of the populist revolts that spawned Donald Trump. Europe has seen many a critical juncture in recent years, from the Greek debt crisis to the anti-immigrant backlash against refugees and Britain’s Brexit vote. Rarely, though, have so many political vultures been circling around one leader with so much at stake for the world order.

The violent protests in France were fueled by intense frustration felt by a middle class that sees itself squeezed. They don’t earn enough to be part of the elite unconcerned with fuel taxes, but they work hard enough that they don’t qualify for the generous welfare benefits handed out to the nation’s poor and to newly arrived immigrants from Africa and the Middle East.

Here in America, Republicans in Congress passed a resolution against carbon taxes over the summer while Democrats embraced the concept in their party platform. Some incoming members of the new Democratic majority in the House are calling to create a select committee to map out a “Green New Deal” that would move the U.S. toward using 100% renewable energy for the electric grid while guaranteeing jobs for everyone. BUENOS AIRES, Argentina — America once advocated for a “new world order.” Now, it seems to prefer no world order.

The transformation took nearly 30 years, but it was encapsulated Friday in two moments: an exultant greeting between the Russian president and Saudi crown prince here, and the death of internationalist President George H.W. Bush in Houston. It was at the opening of the G-20 summit here that Vladimir Putin and Mohammad bin Salman signaled with a bro slap — half high-five, half handshake and all scofflaw — that they will do as they please without fear of repercussion from President Donald Trump or any allies who would need his help to make sanctions stick. Just hours later, Bush — who had announced an allied invasion of Iraq in 1991 by calling for “a new world order — a world where the rule of law, not the law of the jungle, governs the conduct of nations” — died at the age of 94.

From the Financial Times:

The US-led unipolar world has stumbled and miscarried, helping to foster a mini-boom in books that seek to identify a new order emerging from a thicket of questions. Does the rise of China — which used authoritarianism as a spur to mobilise productive forces — presage a new illiberal world order? Does the undeniable eastward shift of economic dynamism mean that Asia is set to become the centre of the world? Will the “Belt and Road Initiative”, a grand Chinese-powered initiative to finance and build infrastructure in more than 80 countries, end up by banishing the ideals of the European Enlightenment and replacing them with the rituals of tianxia, an atavistic Sino-centric new world order? These are crucial inquiries. Each of the three authors reviewed here — Peter Frankopan, professor of global history at Oxford university; Parag Khanna, a Singapore-based academic and writer; and Bruno Maçães, a former Portuguese government minister — brings a different perspective and, for the most part, reaches different conclusions.

In last Sunday’s Andalucían regional elections, the tiny Vox party became the first far-right grouping to win seats since Spain’s return to democracy following the death of General Franco in 1975. The 12 seats it picked up in Andalucía’s 109-seat parliament exceeded all expectations and could see the socialist PSOE party lose control of the heartland it has governed since 1982. But more importantly, they ended four decades of Spanish exceptionalism and showed that the country’s fabled immunity to far-right politics had finally given out. The middle and upper-middle class voters of Los Remedios – many of whom are older people – have long been loyal to the conservative People’s party (PP).