We have purposes in life—large ones, small ones — and they weave in and out of each other, sometimes—to repeat— joining with the mission of another person (or group of persons). We may have a main mission, but we also have many “lesser” ones as well. For example, a journalist may have the mission to expose a major scandal, but may later have another chore along this line to write about spiritual topics or expose another scandal while tending at home to the mission of raising children and caring for his parents. His mission may interweave with that of a shoemaker—in ways he and we would not imagine (for we are all connected—past and present). Beyond the visible mission is the need to keep the spirit clean (while proceeding in that endeavor) or the soul and family line is sullied in a way that inhibits its completion. If we have spirits hanging onto us, we must free ourselves of them to fully conclude our assignments from God and clear the family tree of what otherwise will be bondages that may manifest physically, emotionally, or spiritually — in some cases, torturing descendants.

“I have seen so many cases in the past thirty-five years that I could not even count them, or tell you all the cases we have had with this kind of familial spirit,” wrote Stella Davis, a Catholic laywoman from Virginia who has ministered around the world. “The same sickness in one generation will go on in the bloodline. This is called the ‘spirit of infirmity’ going through several generations. We go to the root of this sickness in the Name of Jesus, and in the power of the Holy Spirit we cut out the spirit of infirmity, cast it out of the person, and send it to Jesus. Sometimes, the affliction skips a generation. Sometimes it’s a demon. Sometimes, it’s an ancestral spirit [which is discerned when a spirit barks out that it’s not going because it has been there a long time]. Some go to the second, third, and fourth generations. Sometimes they are on both sides of the family, father and mother. But the great thing is that they are set free. To see the faces of the people when they come in and when they go out—your eyes sometimes cannot believe they are the same people! They leave with happy faces, joyful hearts, and freedom from their bondage.”

Notes a fine new book on exorcism and deliverance called Slaying Dragons, confirming the idea, “In spiritual warfare, there is something called a generational spirit. This is a demon who is particularly focused on attacking members of a certain family. This demon enters through the authority structure that God permitted, and typically comes in through a sin committed by the father of the family.

“[It] can travel within the family and down through the family line through marriages. Removing generational spirits is one reason why there are exorcisms in the traditional rite of Baptism. These Baptismal exorcisms are also done to ensure the child is not burdened under any curse placed there as a means of revenge against the family. This specific problem is more prevalent in Europe.”

According to another expert, curses levied by someone related by blood — a relative — are the most powerful, long-lasting, and dangerous. 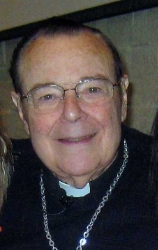 Many of our missions are delayed, compromised, or even destroyed by ancestral baggage. “Untoward deaths in the family, especially of children, could well be part of the effect of bad ‘spiritual environment’ induced by ancestral sin,” agrees Father John Hampsch, an expert in California who points out that a man is three times as likely to be alcoholic if his grandfather was. The same is true for many diseases and those prone to crime or violence. “It is of critical importance to understand that there are two kinds of evil that could be involved in infecting the family tree, one interfacing with the other very often,” adds Father Hampsch. “The first kind of evil may be called intrinsic evil, or sin. In the Lord’s Prayer, we refer to that with repentance in the prayer ‘forgive us our trespasses.’ The second kind of evil mentioned in the last part of the Lord’s Prayer is extrinsic evil, which includes evil forces—devils, demons, and evil spirits that may attack us from without, which we deal with in the phrase, ‘deliver us from evil’—that is, from the Evil One.

Wherever there is any attachment to sin (intrinsic evil) there is usually an attempt of the extrinsic forces, demonic forces, to lodge in those areas. But Jesus, Who says, ‘The prince of this world has no power over Me’ (John 14:30), should be called upon to cleanse the bloodlines of the family tree, both living and dead, of anything of evil that may block the healthy state of the individuals within that family. Through Jesus’ Power we can break any inherited curses or hexes that may have been transmitted through the generations, and cast out any evil spirits that may harass the living members of the family.”

Another priest named Father Lou Cerulli tells those seeking his counsel to write down any facts, thoughts, or memories about deceased relatives during Mass. After the gifts are brought up, he recites a prayer to break generational curses, especially those involving past occult activities.

“Then they bring up the family trees and they are placed in a basket that I raise up to the Lord for His healing,” he explains. “The Eucharist is celebrated and afterward the genograms are sealed in envelopes that are never opened and given to a community of nuns in Montreal who pray over them for three months, later disposing of them by burning them.”

If troubled families can’t get to a healing Mass, priests advise, they should meet and discuss the issue.

“One thing I suggest they do is put their thoughts on paper and develop a genogram as a tool, not as a science, but to become as specific as they can in praying for their families,” says Father Cerulli. “If possible, get together and look at the family tree. Sit down, have a nice meal together, share your stories, bring your photographs, and put it down on paper. Try to be as specific as possible. Put down names if you can. If you don’t know the name of your great-great grandfather, then just put down ‘GGF.’ After you’ve had your discussion and made your notes, pray for the healing of your family tree.” 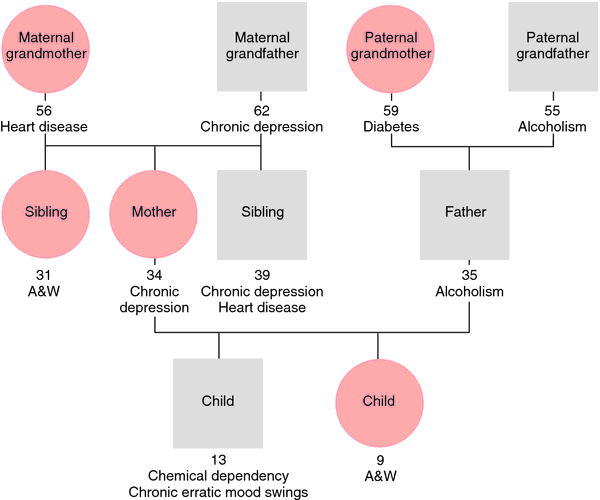 There are physical healings. There is deliverance from disorders like anorexia, bulimia, and even suicidal tendencies. Usually it’s relief from a malaise that has haunted folks for decades. “Invariably, there will be people who come up and say they had been carrying a burden—abortion, miscarriages, infant death—and afterward you can see the release on their faces,” asserts this priest. “Often, there is reconciliation. Such peace and joy! We have cases where there’s been an estrangement and people haven’t heard from family members for twenty years or more, and all of a sudden there’s a knock on the door or a letter in the mail or a phone call. I remember an instance where a lady was even unaware that she had a sibling and after a weekend retreat, she came into contact with this sibling. Sometimes this is within days or weeks of celebration of the Eucharist for the family tree.”

There is a fascinating story that illustrates how Jesus can unbind people from past generations, says Father DeGrandis. “A 35-year-old woman I was praying with in Italy some years ago had an eating disorder. She had a tendency to overeat and then excuse herself to go and vomit. She would do this after every meal. As I was praying for her I asked the Lord for the diagnosis, and then waited for the word of knowledge. The word of the Holy Spirit revealed to me was ‘ancestor.’ I focused on that area, and asked the Lord for wisdom. How do I approach it? As I waited and listened, I started to get a sense of starvation. In a vision I saw an individual being put into jail and starving to death while in confinement. With that understanding, I used the power and authority of Jesus Christ and came against any psychic linkage and bondage between the person I was praying for and the individual in the jail scene. “She went to the chapel later that night and had a vision of peasants in rebellion with authorities over food.

“There was an uprising because the peasants didn’t have enough to eat. She saw a relative being thrown into jail and starving to death. Perhaps she was connecting with something in the collective unconscious. That would seem quite likely. In any event, in a visualization prayer, she took that jailed person to the Lord Jesus Christ in a forgiveness process. Something happened. The next day she came back and reported that there were no more symptoms of a desire to overeat. As far as I know, she was set totally free.”

Part of her mission was to suffer and purge her ancestor. “We, the penitent, need to confess specifically our sins, those of our ancestors and our country,” wrote a psychiatrist from England named Dr. Kenneth McCall, who wrote seminal books of ancestral healing. “In love, we should visualize everyone involved, with apology to God, and commit each one to Him. By the sacrifice of Jesus Christ, and our prayers in His Name, the interference of Satan and his minions is cut so that angels of the Lord are not impeded; they have full authority to guide the dead on their journey heavenwards and to lead them to where we are showing forth all that was accomplished on the Cross.” The Holy Spirit and only the Holy Spirit can enlighten you on hidden aspects of your family that need to be cleansed. We must be careful not to let ourselves be overtaken by the imagination. But it is a fascinating realm and full of the potential for healing.