There are endless wonders in God’s Creation.

Take humans. Take the brain. It can even adapt a human to life as an animal, when necessary — or more to the point, guide animals to care for us.

Case in point: a boy named Saturday Mthiyane — discovered in a bedraggled state near the Tugela River in Kwazulu-Natal, South Africa, at the estimated age of five, having spent a year in the company of monkeys. Like a primate, Saturday ate only raw meat, effortlessly climbed trees, jumped onto rooftops, and when it came to exiting a house… preferred windows. 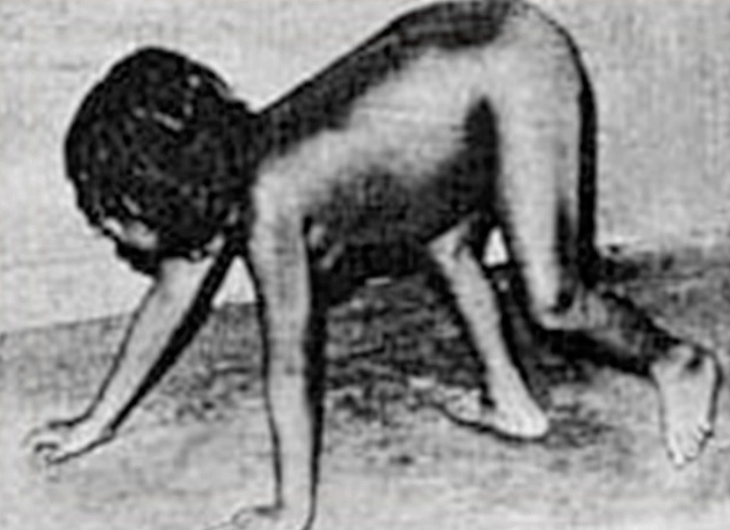 In Syria was the “gazelle boy,” a youngster who could run (on all fours) up to thirty miles an hour, which is faster than an Olympic champion.

There was Ramchandra, a child in the Basti district of northern India who could take running starts, dive into the Kuano River, and return to the surface – after however long it took — with a fish in his mouth. There was the “Bamberg calf child” in Germany who would fight (and scare off) the largest local dogs (bounding after them ferociously). He was rescued.

cases have unhappier endings. Shamdeo was a boy found gamboling with wolf cubs in an Indian forest in 1972. While he eventually gave up his preference for raw meat, Shamdeo, who was 4 when discovered, never learned to speak and died at the age of 17 in Mother Teresa of Calcutta’s Lucknow Home for the Destitute and Dying. His cause of death remains unknown.

Strangest, perhaps: two girls, found in 1920, near Midnapore in India, where like so many feral humans they had been under the care of wolves.

They were captured by Anglican missionary J. A. L. Singh when terrified villagers in a place called Godamuri expressed great terror of what they said were “ghosts” seen at dusk in the jungle with human limbs but hideous heads – they were mortally frightened of it.

Curious, the missionary set up a hunting platform or machan in a big tree where the “ghosts” were seen. On searching the vicinity, Singh came across a gigantic ant mound – two stories in height – that had seven holes in it, apparently taken over by mammals… including wolves.

It was a Saturday in October. The missionary and his men waited before dusk. “All of a sudden,” recalled Reverend Singh, “a grown-up wolf came out from one of the holes. The animal was followed by another of the same size. The second one was followed by a third, closely followed by two cubs one after the other.” (The holes didn’t permit more than one at a time.)

“Close after the cubs came the ghost – a hideous-looking being – hand, foot, and body like a human being; but the head was a big ball of something covering the shoulders and the upper portion of the bust, leaving only a sharp contour of the face visible, and it was… human.”

Close on its heels came another “awful creature,” exactly like this first, but smaller, “their eyes bright and piercing, unlike human eyes.”

They were children who lived with the wolves and who, at the entrance of the hole, sniffed and jumped out like cubs, running on all fours. The missionary had to stop his frightened workmen from killing them, grabbing the upraised barrels of their rifles.

The next day, Reverend Singh ordered his crew to dig into the ant hill, and out came running first one wolf, then a second, and next a third that stood at the entrance growling and obviously protecting cubs. This wolf the men killed, allowing them to open the central cave, where they found the cubs and “hideous” children in a very clean den, all clutching each other, the “ghosts” more snarling than the cubs.

They were taken to an orphanage in Godamuri, were these feral humans, where they were barricaded in a courtyard and cared for by Singh and his wife. Unable to walk or even stand upright, they could move fast as a squirrel on their four limbs and were completely unhumanlike, no capability for understanding words and taking at first only raw milk and then raw meat, particularly carrion: dead birds or other animals, often contending with crows and vultures for it. Their “hideous” heads had been from balled, matted hair, which was clipped off, revealing very young children – but ones that had developed unusually shaped jaws and eyes that Singh said “shone in the dark with the peculiar blue glare of cats and dogs…

When they slept – usually by day — they overlapped each other like piglets. Cold had no effect on them, and it took years for Kamala to allow a blanket, loincloths, and other clothes. Eventually, after years, she learned to stand and take slow steps. Their cheekbones were raised, projecting out as cones. The length between wrists and forefingers was out of proportion, their knees gnarled, stuck at a angle, and calloused.

They never laughed nor showed emotion like joy but for occasional wolverine aggression. Their wails? Three times a night… including at three a.m.

Like wolves, they growled, panted, bared their teeth, and pawed at the earth, causing their fingernails to grow concave. Shy and sleepy during the day, often keeping to themselves in a corner, they roamed fearlessly at night – when they could see much better, in fact very well. The older one, who they named Kamala, lived to be eight, the second, Amala, just to a year-and-a-half. But here we see the great charity of the Christians who sought against all odds to help them.

, 1921. There was dysentery. At one point, round worms, red and as thick as a little finger, had been expelled from both. The fever overtook Amala. While Kamala would live for eight more years, eventually able to utter dozens of rudimentary sounds, baby prattle, and much later crude words, and playing with dogs and later youngsters, Amala “gave up the ghost on the twenty-first of September, 1921,” according to Reverend Singh’s diary. She was baptized a short while before and laid to rest in the churchyard of St. John’s Church in Midnapor. Official cause of death: nephritis.

Somehow, Kamala understood what happened, remaining near the body until burial, refusing food for two days… and though with not a single discernible facial expression, seen to shed two quite human tears.

[above article from the “cutting floor” of Lying Wonders, Strangest Things]