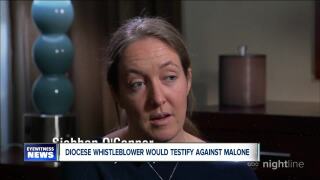 The leader of the Catholic Diocese of Buffalo, Bishop Richard Malone faced tough questions about the priest abuse scandal.

Malone appeared in an interview aired nationwide on ABC’s Nightline .  7 Eyewitness News senior reporter Eileen Buckley spoke to the whistleblower who says she would testify against her former boss.  “For me – it just reminded me that things are such much the way the way they always were,” remarked Siobhan O’Connor.