“Dear friends, may no adversity paralyze you. Be afraid neither of the world, nor of the future, nor of your weakness. The Lord has allowed you to live in this moment of history so that, by your faith, his name will continue to resound throughout the world.” (Pope Benedict XVI)

Set forth below are three important prophecies by three modern saints who were all born in Poland. The first prophecy is by Saint Pope John Paul II, and was made during a visit to the United States in 1976 when he was still a Cardinal. The second prophecy is by Saint Maximilian Kolbe, the Franciscan priest who died in a starvation bunker in Auschwitz during World War II, having volunteered to take the place of a married man. The third prophecy is from Saint Faustina Kowalska, the nun whose “Diary” has promoted greater devotion to God’s Divine Mercy. She died in 1938 and was canonized in 2000.

“We must be prepared to undergo great trials in the not-too-distant future; trials that will require us to be ready to give up even our lives, and a total gift of self to Christ and for Christ. Through your prayers and mine, it is possible to alleviate this tribulation, but it is no longer possible to avert it. . . .How many times has the renewal of the Church been brought about in blood! It will not be different this time.”

“Modern times are dominated by Satan and will be more so in the future. The conflict with hell cannot be engaged by men, even the most clever. The lmmaculata alone has from God the promise of victory over Satan. However, assumed into heaven, the Mother of God now requires our cooperation. She seeks souls who will consecrate themselves entirely to her, who will become in her hands effective instruments for the defeat of Satan and the spreading of God’s kingdom upon earth.”
THIRD PROPHECY (by Saint Faustina Kowalska) 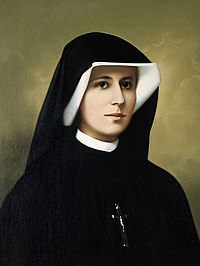 “Jesus looked at me and said: ‘Souls perish in spite of my bitter Passion. I am giving them the last hope of salvation: that is the Feast of my Mercy. If they do not adore my mercy, they will perish for all eternity. Secretary of my mercy, write, tell souls about this great mercy of mine, because the awful day, the day of my justice, is near.’ “ (Diary, 965)

Comment: We should be increasingly aware that there are strong forces in our society under the domain of Satan. One sign of this is the massive apostasy we are witnessing. In Luke’s Gospel (Chapter 19) we see that Jesus wept over Jerusalem and prophesied its coming destruction, which occurred in A.D. 70. Jerusalem was not as blessed as nations who have received the Gospel. The greatest immediate threat in all of this is our children and young adults, who are losing their precious faith in massive numbers. Chastisement comes quickly from the dissolution of morality consequent to the loss of faith: suddenly you find yourself living in a society sinking from the weight of its own immorality (this situation is described by Saint Paul at Romans 1: 24-32 ). The wisdom of the three saints mentioned in this note is unanimous that consecration to Mary is of immense value in remaining faithful to our baptismal consecration to Jesus. Pope Francis had his papacy consecrated to Our Lady of Fatima by Cardinal Jose Polycarp of Lisbon, Portugal; the apparitions of the Blessed Virgin Mary at Fatima have a profound prophetic dimension for our times and the trials the Church will have to endure. Perhaps this is a good time to review the great historical and supernatural facts of Fatima. — Tom Mulcahy, M.A.

Sources: For the prophecy by Saint John Paul II, a June 1, 2014 article by Father C. John McCloskey entitled The Final Confrontation. The prophecy of Saint Maximilian Kolbe can be found at the EWTN website.  Church teaching: see CCC 668-679. Also, Ralph Martin has written a pamphlet, also called The FinalConfrontation, which elaborates on the subject matter of this note (available at renewalministries.net). Father Garrigou-LaGrange once wrote about “great supernatural facts” that worldly people tend to dismiss.

[Footnote from the mail: “I have been a fan since 1997 or so (20 years?) when you first started the website (or at least when I first got the internet). Thank you for your outstanding work over the years going back to The Final Hour. As you know, we are here. I just wanted to say that your article entitled ‘Streets of Gold‘ was outstanding. I believe that your words are profoundly prophetic and I hope that you will publish that all over the internet. It needs to be said. We are on a precipice and all is smoke and mirrors. Please continue to warn all of those who will listen. Your work is a blessing.  We all must now persevere to the end. Night is falling and the road is fading into a narrow path. Darkness ensues and the forest is closing in. The wolves are howling with hunger.  It’s time to move swiftly together so none get lost and hurry home before the storm comes. God Bless you, Peter, Texas]