Dragged And Tossed Into A Torrent: Was This The True Extent Of Jesus’ Suffering?

How extensive were the wounds of Jesus? How was He arrested? How much did He really suffer? 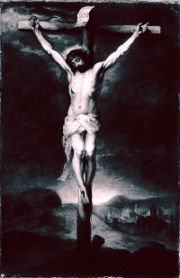 According to mystic Anne Catherine Emmerich, the German stigmatic whose revelations are partly behind a major new movie about the Crucifixion and whose visions are chronicled in a mystical classic called The Dolorous Passion of Our Lord Jesus Christ, the suffering was far more than most imagine — so severe even before He reached Calvary, she says, that only supernatural ministering kept Him from expiring previous to making His way to the Cross.

That miraculous power was evident at His arrest, wrote Emmerich, when the leaders of the soldiers asked Christ Who He was and He affirmatively replied that He was Jesus of Nazareth. Says the account (written from visions in comatose-like ecstasies, with Emmerich suffering many of the pains) those words caused the soldiers to go into a fit.

“Scarcely had He pronounced these words than they all fell to the ground, as if struck with apoplexy,” claimed Emmerich. “Judas, who stood by them, was much alarmed.”

It was at this point that Jesus confronted his betrayer and at the same time stopped Peter from striking the men (Emmerich describes them as “archers”) who were apprehending Him. “Put up again thy sword into its place,” said Jesus.

“For all that take the sword shall perish with the sword. Thinkest thou that I cannot ask My Father, and He will give me presently more than twelve legions of angels? How then shall the Scriptures be fulfilled, that so it must be done?”

The scenarios set forth by Emmerich, who died in 1824 and was declared “venerable”  in 2001, make for extraordinarily lucid visualizations of what Christ suffered. Take them as meditations, or imaginings, not as Gospel accuracy.

While like most private revelations they must be taken more as inspiration than totally accurate reportage — and are never to replace the accounts in the New Testament — it’s no surprise that such a book has reportedly propelled scenes in the new movie, which is set for release next year and is directed by actor Mel Gibson. In one instance the Lord is quoted as saying, “I sat daily with you teaching in the Temple, and you laid not hands upon Me, but this is your hour and the power of darkness” — strikingly similar to the Blessed Mother’s words at Medjugorje (where she said that “this is the hour of the power of darkness”).

“They tied His hands as tightly as possible with hard new cords, fastening the right-hand wrist under the left elbow, and the left-hand wrist under the right elbow,” wrote the mystic. “They encircled His waist with a species of belt studded with iron points, and bound His hands to it with osier bands, while on His neck they put a collar covered with iron points, and to this collar were appended two leathern straps, which were crossed over His chest like a stole and fastened to the belt.

Then they fastened four ropes to different parts of the belt, and by means of these ropes dragged Our Blessed Lord from side to side in the most cruel manner.”

It is in this part of the revelation Emmerich makes another remarkable assertion: that after His arrest, between the Garden of Olives and Gethsemane, there was a bridge over the torrent of Cedron and Jesus was hurled into the water. “I saw Our Lord fall twice before He reached the bridge, and these falls were caused entirely by the barbarous manner in which the soldiers dragged Him,” wrote the seer.

“But when they were half over the bridge they gave full vent to their brutal inclinations, and struck Jesus with such violence that they threw Him off the bridge into the water, and scornfully recommended Him to quench His thirst there.”

This is the night before His Crucifixion. This is the suffering previous to His appearance before the councils and tribunals the following morning. This is on the way to His subterranean imprisonment.

And it is after what Emmerich described as a horrendous confrontation with demons and Satan at Gethsemane just previous to this scene. Could anyone actually have witnessed such detail mystically? And could the Passion actually have been worse than hitherto known? Critics point to the fact that a poet who helped compile Venerable Catherine’s insights was known for “embellishment.”

Aspects may also seem improbable — as when Emmerich (or the poet who helped compile the revelations) asserted that the chalice used at the Last Supper had once been on Noah’s Ark.

But there is no denying the sense that one is getting a rare and precious insight into actual events at many powerful junctures.

When He fell into the torrent, claimed Emmerich, Jesus’ imprints were miraculously impressed into the rock; meanwhile, she relates this instance to a prophetic psalm that says “In his thirst he will drink water from the torrent.” She could also have quoted 18:4: “The cords of death encompassed me, And the  torrents of ungodliness terrified me.”

He was struck with pointed sticks. His feet bled. He was not just spat upon, but covered with “filth and spittle.” All the while, His mother suffered untold anguish — as when spotting the soldiers’ torches and hearing their tumultuous curses. “This sight quote overcame her,” claimed Emmerich. “She became insensible, and John took her into the house of Mary, the mother of Mark.”

The sky was dark, gloomy, the moon red and covered with livid spots, the majority of the apostles overcome with terror and wandering among the valleys or even seeking refuge in caverns beneath Mount Olivet, claimed Emmerich.

Terror indeed: when Jesus appeared before Caiphas and once more identified Himself as Son of the Living God, “hell appeared to be shaken from one extremity to the other,” wrote the stigmatic, “and then, as it were, to burst forth and inundate every person in the house of Caiphas. The despair and fury which these words produced in hell were shown to me under the appearance of a thousand terrific figures in different places.

I remember seeing, among other frightful things, a number of little black objects, like dogs with claws, which walked on their hind legs; I knew at the time what kind of wickedness was indicated by this apparition. I saw these horrible phantoms enter into the bodies of the greatest part of the bystanders.”

During such visions, Emmerich was said to suffer both the mental and bodily torments endured by the Lord — weeping and groaning like one set before the executioner, shuddering, trembling, virtually unconscious, with such profuse perspiration — sometimes bloody — that her clothes were soaked. She described the council.

She described the denial of Peter. She described what else Mary was suffering. And she described the subterranean prison. “The Jews, having quite exhausted their barbarity, shut Jesus up up in a little vaulted prison, the remains of which subsist to this day,” the seer asserted. “Two of the archers alone remained with Him, and they were soon replaced by two others.

He was still clothed in the old dirty mantle, and covered with the spittle and other filth which they had thrown over Him; for they had not allowed Him to put on His own clothes again, but kept His hands tightly bound together.

When Our Lord entered this prison, He prayed most fervently that His heavenly Father would accept all that He had already suffered, and all that He was about to suffer, as an expiatory sacrifice, not only for His executioners, but likewise for all who in future ages might have to suffer torments such as He was about to endure.”

There was not a moment of respite. There was the dreariness. There was the fact that He was tied to a pillar. So exhausted was Jesus, so wounded, so burdened by chains, that He could scarcely stand. The sight of it made Emmerich physically ill.

The Lord tottered rather than walked and was almost unrecognizable from the sufferings — colorless, haggard. It was about eight the next morning, she asserted, when He reached the palace of Pilate.

If there was reluctance on the part of Pilate, it may have been because his wife had experienced extraordinary dreams that caused her the greatest of anxiety and sympathy for Jesus.

Still, He was dragged to court, and according to Emmerich, at one point a large white sack with a hole cut out was put over His head with mockery. Mud was thrown at Jesus, and He was dragged through a gutter.

“I saw blood streaming from His head, and three times did the blows prostrate Him, but angels were weeping at His side, and they anointed His head with heavenly balsam. It was revealed to me that had it not been for this miraculous assistance, He must have died from those wounds.”

The scourging? This was conducted by six “dark, swarthy men” from Egypt, said the mystic — cruel criminals who had been condemned to hard labor. They struck Jesus with their fists. They dragged Him again. He was pinioned. His mother saw some of this and was overcome with grief.

At one point He looked toward her. The night had been dark and cold, and now the morning was cloudy and according to Emmerich, “a little hail had fallen, which surprised everyone.”

But toward noon it became brighter, and the sun shone forth. Jesus was ready for His Crucifixion after a scourging marked by tremendous fury — and assault by thorny sticks that tore into His flesh.

At the conclusion of the scourging He wiped the blood from His eyes so that He could look again at His mother, who stretched her arm toward Him and who suffered almost as much as He did, as we will see next.

Our Upcoming Pilgrimage and Retreat: Guadalupe and San Francisco Retreat