We all know about “black Madonnas.” Or do we?

The mind swerves to spots such as Czestochowa in Poland, where an image thought to have been painted (on a tabletop) by Luke the Apostle has drawn millions of pilgrims, many reporting cures.

And we may think we know of another couple black Madonnas, such as the one in the high reaches of a mountain outside of Barcelona called Montserrat. (What a perch and what a feeling!)

But no: you probably don’t know all about such dark images of Mary — don’t realize, for example, that there are at least 150 such statues in France and five hundred across Europe. The wonders of Mary always go beyond comphrension.

In France, near the Aude River, is a church called Notre Dame de Marceille near Limoux. Inside is a wood carving of Mary on a chair, holding Jesus on her lap. She was discovered in medieval times by a farmer who was plowing his field when suddenly his oxen refused to move.

It was as the farmer, pondering the odd circumstance, looked at the earth in front of his stalled animals that he spotted a statue protruding from the dirt. It was a dark image of the Virgin and he took it home — where, overnight, it vanished. (He later found it right back where he’d originally discovered it, and decided, when he kept taking her away, and she kept vanishing, returning to the original spot, to build a church there. Just fifty miles away, on the right bank of the Tarn River, near Albi, France, is the “Black Madonna of La Dreche.” This time a dark statue of her — or at least a vision of what looked like a dark image — was spotted in the branches of a tree, along with the apparition of a robed monk-like figure kneeling in prayer in front of it. Others came, others saw the same vision, and others watched time after time as the vision faded, although eventually it remained in the form of an actual wooden statue and a shrine was built at this site also.

Many were cured. Many were converted. Everyone was touched.

In fact, notes an author, “Black Madonnas can be found just about everywhere, from Russia to the Americas, making the image not an anomaly but an archetype.”

They are defined, of course, as paintings or statues depicting Mary as swarthy of skin, often holding the Child, sometimes sitting on a throne. Most are dated in the Middle Ages. And many — again, most — are claimed to have miraculous powers.

Is she dark, the Virgin, because of the smoke from fires that plagued churches or candles or aging paint — the traditional Church explanation? Artwork does turn dark from candle soot and/or paint pigments that have deteriorated.

But there’s a different quality about many dark images of Mary. She seems meant to be darkly textured, simply Heaven presenting her the way a woman in Palestine 2,000 years ago may have appeared (with Caucasian features but dark, or, as at Guadalupe, olive-like skin).

For while the soot from candles is often a viable explanation, it does not always reconcile why, in certain cases, only the skin has turned dark (not the attire) nor why the woman’s skin, on rarer occasions, is dark but not the Infant’s is not (or at least, not as dark).

(We had the opportunity to visit her at Czestochowa as well as Montserrat, and the feeling in front of the Black Madonna at these places is comparable to the feeling at Guadalupe or Lourdes.)

Mysteries? For sure. To wit: why is Mary sometimes depicted as holding a regal scepter? And in others: might it be (as some suggest) Mary Magdalene who is depicted?

If you scan The Last Secret you’ll be amazed at Mary’s hidden history — and how, through such miracles and appearances, she founded the European Catholic Church, which became the springboard worldwide for Christianity. 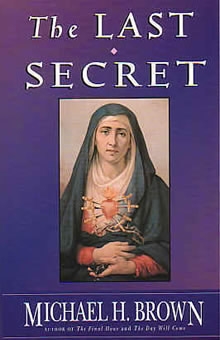