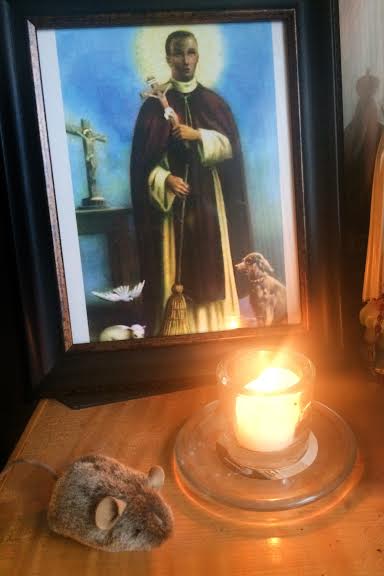 “What’s the mouse doing on your altar?”

I almost jumped back from what I saw, as Joseph Giles, retired lay chaplain and a convert Baptist, was giving me a tour of his house.

“It’s not real,” he assured me. But I thought it was still odd, as I would never imagine seeing a mouse placed on top of a Catholic altar. Never!

Then as I surveyed the rest of the surrounding images, it made sense!

Saint Martin de Porres’ picture was behind the fake mouse. It’s a prop to remind my friend Joseph of the famous miracle attributed to his Patron Saint from Peru.

The story unfolded when Saint Martin was already accepted as a lay Dominican and allowed to wear the habit in exchange for performing menial tasks. One day the superior ordered Martin to poison the rodents that had invaded their convent. Saint Martin was obedient but felt sorry for the rats. So, he went out to the garden and summoned the pesky creatures. When the rats came out, he reprimanded them for their behavior and warned them about the poison. He promised to feed them every day in the garden if they would leave the convent alone. Both parties agreed and the rats never troubled the convent again.

Joseph was surprised when I explained some background story of his Patron Saint. I proceeded to tell him my personal encounter with Saint Martin and how I was healed through his intercession.

My illness began around the summer of 1998, while I was still a civil service worker at McClellan Air Force Base in Sacramento. I was transferred to another military facility 300 miles away. I was already getting sick but they cleared for the transfer anyway. Besides, all my medical tests were normal.

My new assignment could not work to the benefit of any substantive work from me because of my constant trips to the emergency room. The doctor would always issue me a few days off from work and a new prescription to try. The diagnosis was called Chronic Fatigue Syndrome. The illness generated other health problems such as high blood pressure, diabetes, etcetera. All the doctors who examined me said there was no cure and my condition might get worse.

The weakness I experienced was really bad. I would struggle to drink a glass of water from hands that were shaking, and most of the time, I was bedridden. My whole body ached; I’d drag my feet slowly when I walked. Oftentimes I could not even recognize my own family due to brain fog. All day, I had to conserve what little energy I had.

I tried many alternative treatments but none helped. Come to think of it, I did ask the Lord about twenty years before, that I would rather suffer my purgatory here on earth.

Then one day, I saw a special devotional card sticking out of my wife’s prayer book. It pictured a black priest holding a broom and surrounded by different animals.

I had never known of a black saint named Martin de Porres (feast day, November 3). I did some research and found out that Saint Martin was gifted by God with many spiritual gifts such as healing, levitation, and the ability to talk to animals. He was also known for traveling to different places without leaving his homeland of Peru, including a documented case where he appeared to a sick friar in the Philippines without leaving his monastery!

I was sold and wanted to talk to Saint Martin in prayer. So I made a novena and on the ninth day, dreamt of him. He was standing under a tree and while looking straight at me said, “Don’t worry. You will be well again.”

After about a year, I was sent back to my previous job in Sacramento but processed for an early disability. I had forgotten all about my dream when, after a few months, I needed to have a tire replaced on a borrowed car. I went to a used-tire shop. Nobody was there. When I started looking for someone, a black person approached me. He was with a boy about seven years old.

I looked twice at the child because he had light brown hair, blue eyes, and looked very similar to a painting I did of the child Jesus with a Cross behind him.

During our conversation, my surroundings became blurred and the sound muted. He said he frequently travels to different places, even the Philippines. He asked me about any issues I was having and I told him about my constant weakness. He said, “Don’t worry, you will be well again.” He proudly showed me his muscular and fit body. He said he was into a fitness program and advised me to drink “chlorella.” He described it as a green powder that could be mixed in a juice.

My surrounding area became normal again. I saw the mechanic and had my tire replaced. But the man I was talking to and his boy companion were nowhere to be found.

I told my wife about my experience; I don’t think she believed me. I went to different vitamin shops and asked them about chlorella powder, but no one seemed to know.

Another year had passed and I had forgotten all about my tire-shop encounter. One day, our mailman delivered a box from a friend that lived in San Diego. When we opened the box, it contained about twenty chlorella jars. Nobody told her about my problem. She just thought it would be good for our family to try them!

The healing didn’t happen overnight, but I became well again.