You have been accepted into God’s Light. With love, get there.
+

When the sky opens, it doesn’t have to be spectacular. Usually, it’s in the way of little incidents and happenstance.
+
This is how God let’s us know that we are of His Light and that He’s there.
+
Doubtless, you have examples. Send them!
+
We love miracles — especially about the Blessed Mother. For instance:
+
“My name: Kathleen Cruse
“City: San Diego, California
++
“Let me tell you a story.
+
“My youngest son (19 at the time) got a motorcycle in 2019. This was very concerning to me, because 1) I feel motorcycles are a death trap, and 2) my son was not what I would call a defensive driver, as evidenced by the dents and dings on his pickup truck that he drove every day.+

“The first week he was driving his motorcycle to work on the San Diego freeways, I was a wreck. I told God, I’m going to end up in the hospital again with a heart attack from stress, with him driving to and from work in rush-hour traffic on his motorcycle.

“On the third day, I was up as he left at 5:30 or so in the morning. I had my rosary beads in hand, and I watched him drive away in the early morning light and I started saying my Rosary.

“And, only moments into saying the rosary, I had a vision. I saw the Blessed Mother standing a little bit behind Dustin and I saw Dustin standing in his jeans and T-shirt in 3/4-view. Now mind you, Dustin is not religious at all at this point in his life. But in my vision, he had his hands clasped reverently, and his head bowed respectfully as he stood there.

“As I watched, the Blessed Mother put her blue cape over his shoulders. She was on his left and she was way shorter than he is.

“I was astonished. I said, what does that mean? So I Googled the meaning of the Blessed Mother‘s cape. I found out that it was called her ‘mantle’ and that it symbolizes protection.

“And I immediately felt comforted. I relaxed and I felt that Heaven was watching over him. Then, coincidentally, I was reading another book, and one of the saints was saying that the Blessed Mother was only 5 foot 3 or four, I can’t remember exactly which. But I remember thinking, yes, she was way shorter than my son in the vision!

“Some months later, on August 27, Dustin got hit on his motorcycle by a lady who was texting in her car. He flew off over his handlebars and landed squarely on his head.

“In his words, he said that he felt like he landed on a feather.

“August 27 is the feast day of Saint Monica, who just happens to be my patron saint. When you get Confirmed you have to select a patron saint; there are hundreds of saints to choose from, but she’s my patron saint, and he got hit on August 27 and did not get injured or run over. Now wait, there’s more…

“Then! While he was having his bike repaired, he was driving his little beat-up pickup truck back and forth to work. On October 1, he was turning left to pull into the parking lot where he works, when this impatient crazy guy in a big huge vehicle decided to pass on his left. He collided directly into the driver’s door and totaled Dustin‘s truck. Again, Dustin was fine.

“Guess what October 1 is! It is the feast day of the protection of the Blessed Mother. This totaling of his pickup truck led him to decide to not want to be on his motorcycle anymore and instead to get a new car.

“So the events of October 1 resulted in his ultimate protection, getting rid of the motorcycle.

“Thank you Heaven, thank you God; thank you for your protection, Blessed Mother.” 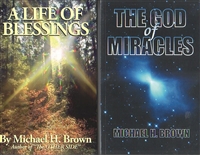