About our article last week on strange, uncanny, even unnerving phenomena attached to cell phones — like creating their own alarm to disrupt sleep — we heard from some viewers.

Cell-phone phenomena? Are you for real?

Time for the mail.

“I am a retired college professor from Winthrop University,” writes Beth Young of Rock Hill, South Carolina. “The photo [below] appeared on my phone after Mass at St Philip Neri in Fort Mill, South Carolina. My phone was in the car during Mass. I am a lifelong Catholic. The date on the photo was March 3, 2017. A similar Cross is in the lobby of the St. Philip Neri Church, but there are no special lights over the Cross or anything that would explain the illumination.

“Ash Wednesday and Lent had begun on March 1st that year. I thought it was interesting that a pregnant woman was also in the photo. I have never taken a photo inside the church as I always leave my phone in the car. The photo just appeared in my photos on my IPhone. I just assumed that it was a gift from God.” 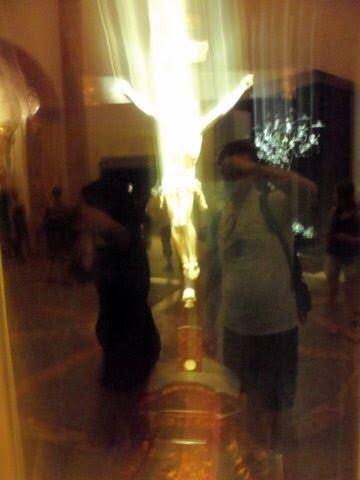 There is also Carolyn Gentile, of Takeda’s Data Sciences Institute, in Cambridge, Massachusetts:

“Good can happen as well and maybe by our guardian angels. At least the ones that are tech-savvy. One day I was at work [when I was at Forum Pharmaceuticals in Watertown] and I left my cell phone on my desk, I came back to my office and the home screen picture had changed.  I counted, it takes eight steps to do this.  It was a picture within my gallery of the tabernacle at my church. See below.  Also, that same day, when commuting back home, I was following a car whose license plate read:  ADRTON. I took it as a sign from my guardian angel to: ‘Get back to Eucharist Adoration’!” 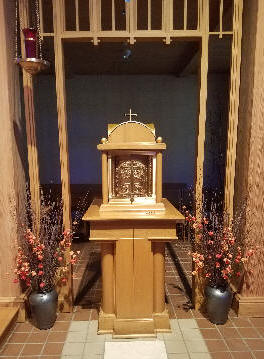 “I share three  bizarre phone events for your readers,” writes Tina Lorge of Santa Barbara, California. ” I do believe the theory that since Satan fell in a bolt of lightning, diabolical spirits tend to prefer electronic/light devices in which to dwell.

My husband and I were present at my mother’s (peaceful) death June 6 at the Care Home where she lived.  Minutes later, as we were getting ready to leave before the Mortuary attendants arrived:+

— Both phones rang simultaneously. (we were next to each other, phones on the table).+

Our French daughter-in-law Charlotte has a 20-something half brother who has always been trouble.  At times, he has been violent and vicious, and takes drugs.  During a contentious phone conversation with him Charlotte’s phone went ‘ballistic, flashing strange images lightening-speed, even showing photos of their daughters. Our son was able to use his phone to videotape some of it, which he showed us when they were here a few days later. They had absolutely no explanation, especially the girls’ pictures. There was no explanation other than demonic spirits.+

A few minutes before 3 a.m., both our phones rang.  It appeared to be FaceTime calls from Charlotte (in France) from WhatsApp.  However, when I called back, she said they hadn’t called us, and she never uses the WhatsApp.+

I’ve had other strange phone events and asked our priest to bless my old phone, which he did.  Maybe we need these phones blessed too — what do you think?”+

“I have a little story,” wrote Judy Ponchione. “My husband would never use a cell phone. But the night before he was buried when I checked my phone there was a message on my cell phone above the keyboard that said, I love you Judy. That was two and a half years ago and every time I think about it I find it amazing that this could happen.  I can only imagine that perhaps he asked Our Lord if he could send me a message because he had lost his ability to talk and didn’t have the opportunity to tell me one last time that he loved me.  How can a person not believe that there is life after death?”+

We have no doubt about it whatsoever, not for a nanosecond.+

“On occasion when I shut my phone alarm off in the morning, it will still ring as if I pressed snooze,” writes a viewer named Becky. “I don’t press snooze, but when this happens it seems to be on days I fell back to sleep quickly, and/or really do need to get up.  I consider this an extra aid from my guardian angel.“+

What would we do (and we’re not talking about cell phones!) without one?