The issue of animals — God’s creatures — and a spiritual dimension is a fascinating one, from the communication saints like Francis of Assisi had with animals to current holy sites such as Medjugorje, where swallows famously stopped squawking and flitting about during apparitions.

There are many other examples.

For now, let’s go to the mail. 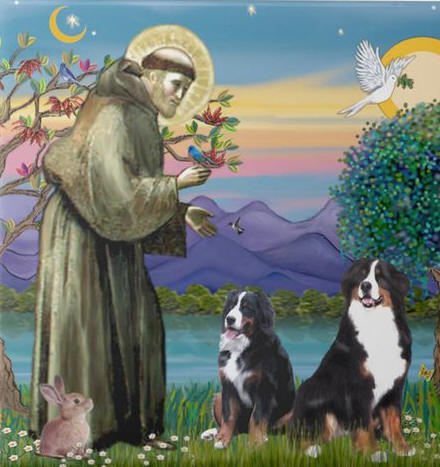 “You ask your readers this question, ‘And I would like to ask you if you have noticed that animals recognize sanctity and have some kind of veneration?'” writes Margaret Johnson.

“This incident took place in the winter of 2019 at Waldron Lake in Anchorage, Alaska.

“I was walking my dog Lily, a ten-year old Labrador Retriever. We were walking a snow-covered path in a popular area for dog-walkers. A lady with a pitbull breed, who I had never seen before,  passed us on the trail.  Her dog got loose. and with its leash dragging the ground, attacked my dog from behind!

“It happened fast and without warning.

“My dog, Lily (80 + lbs.) was laid out on the frozen ground with a pitbull in a choke-hold on her throat.

“The owner was yelling at her dog and beating it with the leash. I was on the ground punching the pitbull and yelling, ‘No!’ My dog was crying in pain and unable to get free. Nothing was working and the pitbull held my dog down by her throat.

“I heard an interior voice say to me, ‘Pray to St. Michael.’ I began to say the traditional Catholic prayer to St. Michael put loud. ‘St. Michael the Archangel be our defense in battle and protect us from the wickedness and the snares of the devil, May God rebuke him we humbly pray and do thou O Prince of the heavenly host, through the power of God cast into hell Satan and all the evil spirits that prowl about the world seeking the ruin of souls.  Amen.’

“After saying this prayer clearly and loudly, this pitbull released its grip on my dog and walked backward and stood calmly on the trail. The owner grabbed her dog’s leash and said ‘How did you do that.’  I told, ‘I didn’t do it, St. Michael, the Archangel did.’

“My dog, Lily, took off down the trail at full speed for home. I ran after her. I thought I’d be going to the vet.  Upon finally catching up to Lily, I found one small tooth mark on her neck and no blood.  A miracle.

“God protected my dog and me from a pitbull attack through the intercession of St. Michael. We never did see that woman or her pitbull again. Glory be to God and His Angels forever, who look out and care for all creatures great and small.”

And this from viewer Raven Wenner in the UK:

“I was trying my Carmelite vocation in a long retreat lasting all of  Advent of 1981 at the Spiritual Life Institute when it was still on an extensive desert acreage — an old ranch– at Sedona Arizona. However —

“The hermits had a cat (named ‘Tate’) and two mongrel dogs who ranged over the large and beautiful acreage. Whenever Mass was held in the circular library — chapel centered amongst the hermitages —scheduled or unscheduled, the dogs, even if a quarter-mile away, would race to the chapel from wherever they were often from different directions — to curl up under either end of the altar and go into a doze!
=
“They were awake, but as if in a  trance all through Mass, and didn’t move until Mass was over upon which they would rise and sedately leave.
=
The dogs were drawn to the Mass as if by a magnet. . . . every day, and even when there was an extra Mass said by a visiting priest. They always knew when Mass was about to start, and always appeared in time to curl up under the altar before the priest approached the altar.
=
(“Alas, the SLI has long gone ‘new age’ at Crestone, Colorado, and is now located in an  invitation-only globalist-sponsored reserve with some Tibetan monks and some other “ecumenical” religious communities aimed — I think—at spiritually legitimizing the approaching  ‘one world religion.’)”
=
But the lesson on animals: like the accounts of Saint Francis, that we’ll take.
+