I have written before about “riding the waves.” It was a favorite expression of my father’s: ride the waves, he’d always say, when trouble erupted (whether small or a tsunami).

This is something for beach-goers and all of us, this summer, wherever we go, or don’t go, to contemplate.

We can also take such a lesson, of course, from surfers, the most famous of whom, when it comes to the “big wave,” is Laird Hamilton of Hawaii, who has ridden waves from fifty to 120 feet in height. (You read that correctly.) 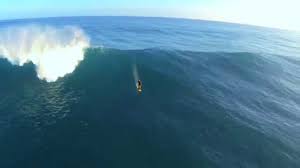 In Tahiti, in August of 2000, Hamilton, who travels the world, to wherever the surf’s up, somehow survived “Teahupo’o” and the “heaviest wave in history” (according to surf experts) even though it crashed right on top of him, causing Hamilton to disappear for long moments.

No one watching thought he’d survive, but Hamilton somehow comes out of such situations and has any number of times and it is because he knows how to ride the wave. He knows how to move with the flow of life. He lets himself adjust to whatever is thrown at him (even if it’s a wall of water that pushes him forty feet underwater — for even longer moments).

Hamilton sometimes heads a couple miles into the Pacific to catch the right ones, and lives within hearing distance of the roar produced by one of the most famous and feared “big wave”: “Jaws” in Maui.

This at times means letting go of our designs and allowing for God’s. We’re meant to resist in some cases, be submissive in others. There are times currents are too strong and we waste time fighting against them. A rip current can take out the strongest swimmer and the biggest danger is fatigue from fighting against it.

Complaining is a luxury, notes Hamilton. Instead, use words wisely. Happiness is easier (and smarter). Embrace new adventures and challenges.

“I truly believe that everything’s according to a plan — but it’s out of our hands,” writes Hamilton in a book called Force of Nature.

“In hindsight, there’s great evidence of that. But along the way, especially when the water gets rough, it can be hard to believe it. I don’t always get what I want — no one does. There have been days when I missed epic swells because I’ve been down-on-the-floor sick. When that happens, it’s torture; more than anything, I want to be out there surfing.

“But I’ve learned to accept that on some days I’m not meant to. Ultimately, I think the best way to take advantage of what life has to offer is to be open to whatever comes, even when it doesn’t arrive in the exact package you envisioned. There’s no hard proof that everything’s unfolding as it should. But that’s what faith is: belief without proof.”

Expect the occasional obstacle or setback, he preaches. It might be in the way of resistance from people or simply how a situation forms. “For many people, the desire to avoid unpleasant realities is one of the impulses of their life,” he says. “MY advice: Get over that. No one enjoys a struggle, but it’s a necessary process. The irony is that when you do turn to face the problem, you’ll get past it far easier than if you run away. Because it’s just going to follow you. Avoiding something difficult now just means you’re going to meet it again later.”

This is a fellow who has paddle-boarded seventy miles between islands (with thunderstorms around him), bicycled hundreds of miles, snowboarded in the Caucus Mountains of Russia.

Not that Hamilton is our model preacher: while he has been reading the Bible since age sixteen, he also strays into yoga. And there is that focus — perhaps too much so — on the body.

But we can take what is good, and there is good advice indeed. You can go beyond what you think you can, in most cases — he shows us.

Be disciplined. Work hard. Live life to the fullest, even into “old” age. Keep riding the “car.” Be not afraid.

See what is good.

Go with the flow. Go with God’s Will. Feel His Power. Be aware of every bone and muscle, figuratively. Use every “bone” and “muscle.” Treat your body well by having a pure open driven joyful spirit.

When we do that, no wave is too large to ride.