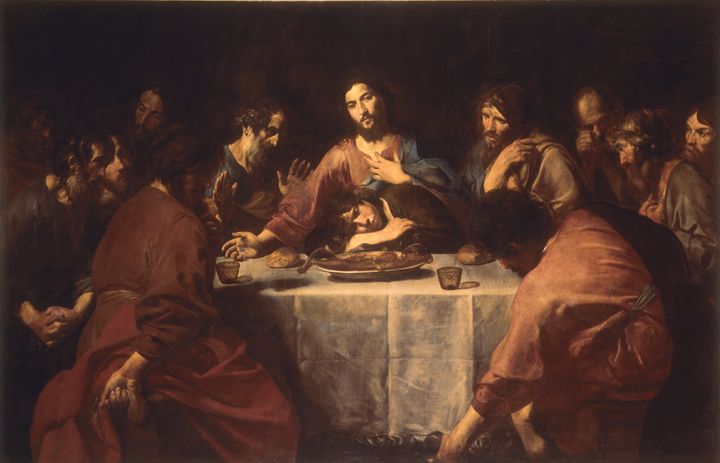 THE chalice which the Apostles brought from Veronica’s house was wonderful and mysterious in its appearance. It had been kept a long time in the Temple among other precious objects of great antiquity, the use and origin of which had been forgotten.

The same has been in some degree the case in the Christian Church, where many consecrated jewels have been forgotten and fallen into disuse with time. Ancient vases and jewels, buried beneath the Temple, had often been dug up, sold, or reset.

Thus it was that, by God’s permission, this holy vessel, which none had ever been able to meltdown on account of its being made of some unknown material, and which had been found by the priests in the treasury of the Temple among other objects no longer made use of, had been sold to some antiquaries. It was bought by Seraphia, was several times made use of by Jesus in the celebration of festivals, and, from the day of the Last Supper, became the exclusive property of the holy Christian community.

This vessel was not always the same as when used by our Lord at his Last Supper, and perhaps it was upon that occasion that the various pieces which composed it were first put together. The great chalice stood upon a plate, out of which a species of tablet could also be drawn, and around it there were six little glasses. The great chalice contained another smaller vase; above it there was a small plate, and then came around cover. A spoon was inserted in the foot of the chalice and could be easily drawn out for use. All these different vessels were covered with fine linen, and, if I am not mistaken, were wrapped up in a case made of leather. The great chalice was composed of the cup and of the foot, which last must have been joined on to it at a later period, for it was of a different material. The cup was pear-shaped, massive, dark-coloured, and highly polished, with gold ornaments, and two small handles by which it could be lifted. The foot was of virgin gold, elaborately worked, ornamented with a serpent and a small bunch of grapes, and enriched with precious stones. The chalice was left in the Church of Jerusalem, in the hands of St. James the Less; and I see that it is still preserved in that town—it will reappear someday, in the same manner as before. Other Churches took the little cups which surrounded it; one was taken to Antioch, and another to Ephesus. They belonged to the patriarchs, who drank some mysterious beverage out of them when they received or gave a Benediction, as I have seen many times.

The great chalice had formerly been in the possession of Abraham; Melchisedech brought it with him from the land of Semiramis to the land of Canaan, when he was beginning to found some settlements on the spot where Jerusalem was afterwards built; he made use of it then for offering sacrifice, when he offered bread and wine in the presence of Abraham, and he left it in the possession of that holy patriarch. This same chalice had also been preserved in Noah’s Ark. 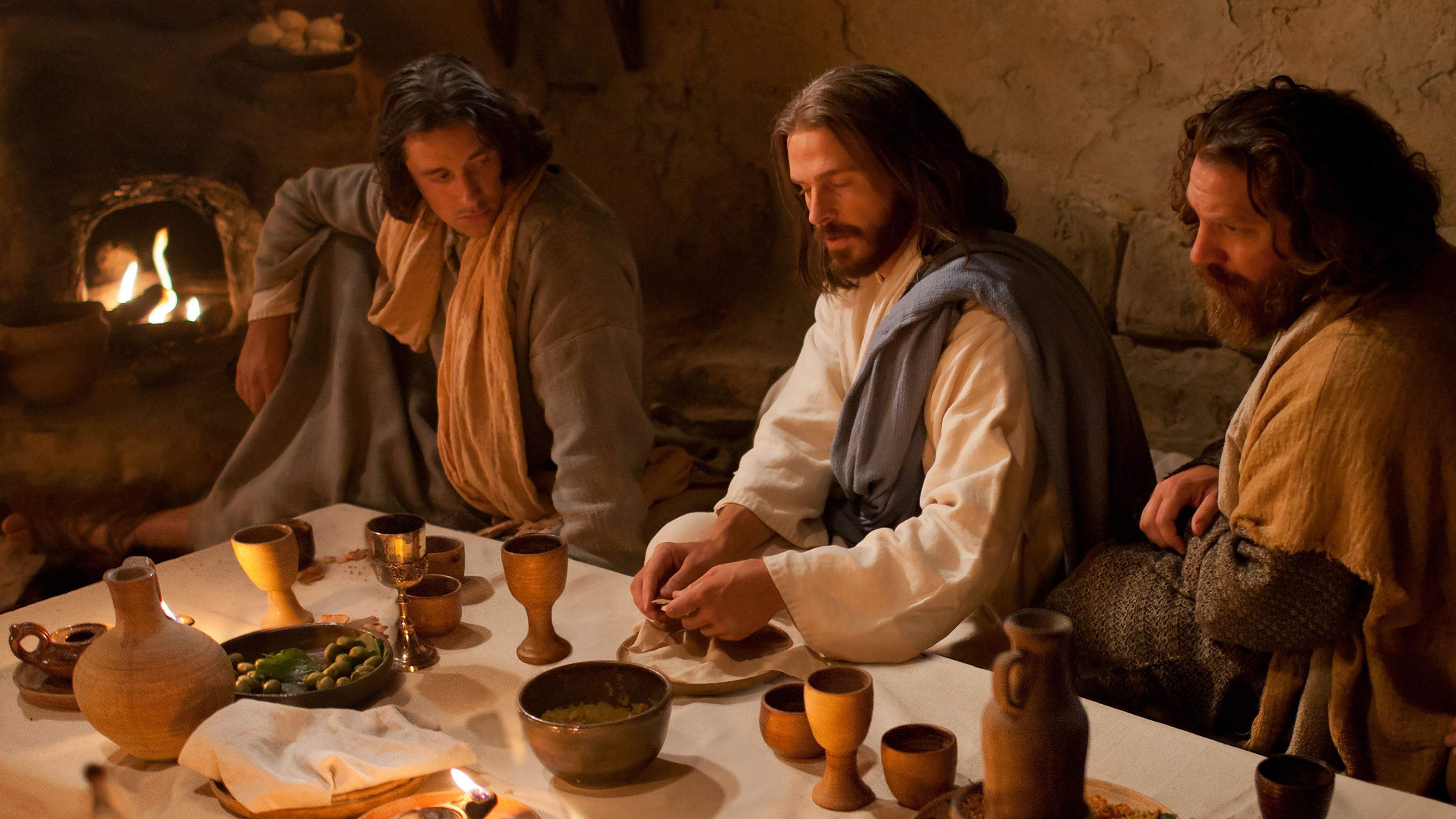 Jesus goes up to Jerusalem.

IN the morning, while the Apostles were engaged at Jerusalem in preparing for the Pasch, Jesus, who had remained at Bethania, took an affecting leave of the holy women, of Lazarus, and of his Blessed Mother, and gave them some final instructions. I saw our Lord conversing apart with his Mother, and he told her, among other things, that he had sent Peter, the apostle of faith, and John, the apostle of love, to prepare for the Pasch at Jerusalem. He said, in speaking of Magdalen, whose grief was excessive, that her love was great, but still somewhat human, and that on this account her sorrow made her beside herself. He spoke also of the schemes of the traitor Judas, and the Blessed Virgin prayed for him. Judas had again left Bethania to go to Jerusalem, under pretence of paying some debts that were due. He spent his whole day in hurrying backwards and forwards from one Pharisee to another, and making his final agreements with them He was shown the soldiers who had been engaged to seize the person of our Divine Saviour, and he so arranged his journeys
to and fro as to be able to account for his absence.

I beheld all his wicked schemes and all his thoughts. He was naturally active and obliging, but these good qualities were choked by avarice, ambition, and envy, which passions he made no effort to control. In our Lord’s absence he had even performed miracles and healed the sick. When our Lord announced to his Blessed Mother what was going to take place, she besought him, in the most touching terms, to let her die with him. But he exhorted her to show more calmness in her sorrow than the other women, told her that he should rise again, and named the very spot where he should appear to her. She did not weep much, but her grief was indescribable, and there was something almost awful in her look of deep recollection. Our Divine Lord returned thanks, as a loving Son, for all the love she had borne him, and pressed her to his heart. He also told her that he would make the Last Supper with her, spiritually, and named the hour at which she would receive his precious Body and Blood. Then once more he, in touching language, bade farewell to all, and gave them different instructions.

About twelve o’clock in the day, Jesus and the nine Apostles went from Bethania up to Jerusalem, followed by seven disciples, who, with the exception of Nathaniel and Silas, came from Jerusalem and the neighbourhood. Among these were John, Mark, and the son of the poor widow who, the Thursday previous, had offered her mite in the Temple, whilst Jesus was preaching there. Jesus had taken him into his company a few days before. The holy women set off later. Jesus and his companions walked around Mount Olivet, about the valley of Josaphat, and even as far as Mount Calvary. During the whole of this walk, be continued giving them instructions.

He told the Apostles, among other things, that until then he had given them his bread and his wine, but that this day he was going to give them his Body and Blood, his whole self-all that he had and all that he was. The countenance of our Lord bore so touching an expression whilst he was speaking, that his whole soul seemed to breathe forth from his lips, and he appeared to be languishing with love and desire for the moment when he should give himself to man. His disciples did not understand him, but thought that he was speaking of the Paschal Lamb. No words can give an adequate idea of the love and resignation which were expressed in these last discourses of our Lord at Bethania, and on his way to Jerusalem.

The seven disciples who had followed our Lord to Jerusalem did not go there in his company, but carried the ceremonial habits for the Pasch to the supper-room, and then returned to the house of Mary, the mother of Mark. When Peter and John came to the supper-room with the chalice, all the ceremonial habits were already in the vestibule, whither they had been brought by his disciples and some companions. They had also hung the walls with drapery, cleared the higher openings in the sides, and put up three lamps. Peter and John then went to the Valley of Josaphat, and summoned Our Lord and the twelve Apostles. The disciples and friends, who were also to make their Pasch in the supper-room, came later…

[Next: The Last Supper] 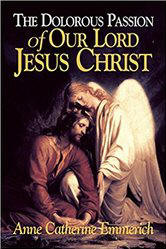 [Picture of Jesus, Apostles sitting on floor around table is from here]