The other day there was the news item: how despite advances in medicine, lifespans around the world are of late ticking downward.

“Signs of declining health for American men abound in the National Center for Health Statistics latest annual report,” related Yahoo. “Life expectancy at birth for males declined to 76.1 years in 2017 from 76.5 in 2014, according to the data. At age 65, men are projected to live another 18.1 years compared with 20.6 years for women.”

How could that be, many may have wondered — life expectancy, for so long on the rise, now on the decline? That, said the article, “is occurring in part due to deaths from despair. From 2007 to 2017, the mortality rate from drug overdoses increased 82 percent, to 21.7 deaths from 11.9 per hundred thousand.” Over the same ten-year period, suicide rates increased twenty-four percent.

People are increasingly depressed — in too many cases, desperate. And a large part of the problem is that we are too centered on the personal lives of others, in our own little cyber-worlds, instead of on Christ. In the cyber-universe, folks turn narcissistic, presenting themselves in an artificial scrubbed manner as living glossy perfect lives and causing those who see them on social media outlets such as Instagram, Twitter, and Facebook to despair that they aren’t as glowing, as beautiful, as enscounced in a gorgeous home, as well-coiffed, as surrounded by friends and family (and “likes”), as able to travel the world over.

Simply put, scanning social feeds, many feel left out. They are also more isolated. The more we have become connected, the more disconnected — with ourselves and others — we have become. 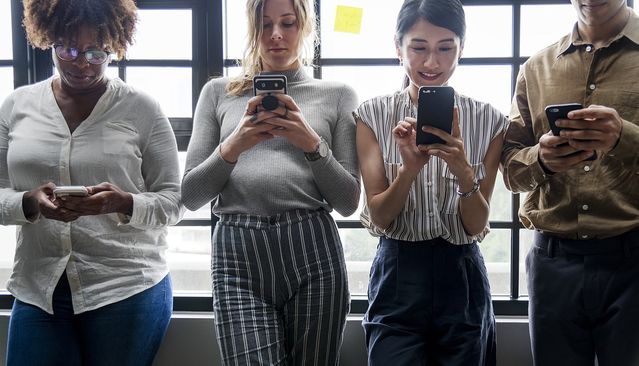 Notes Psychology Today: “We are plagued by a loneliness epidemic. In the last fifty years, regardless of geographic location, gender, race, or ethnicity, rates of loneliness have doubled in the United States. This increase has been associated with several growing concerns related to mental and physical well-being. Yet, in a time in which it seems that we are more connected than ever before, how could this be possible? Could it be that our technological advances developed to foster connectivity are also affecting our loneliness?”

An increase in social media use even has been associated with  increased sleep disturbances. One can also add: anger. Everyone is so angry, including with themselves.

Yet, we’re addicted — because though it leaves a hangover, social media has an initial lift.

Erik Peper, Associate Professor of Health Education at San Francisco State University, emphasizes, says the article, “that smartphone use can form neurological connections similar to connections that are seen in individuals with an opioid addiction. Further, in a study of 135 individuals, Peper and his colleagues found that people who utilize their phones more often were more likely to report feeling anxious, depressed, isolated, and lonely.”

When someone is not Christ-centered, when one invests more time on Facebook than praying, or reading the Bible, or simply contemplating God, that leads to despair.

“Exposure to idealized images on social media can also elicit envy,” said the magazine. “Falling prey to social comparison, individuals who were otherwise content could develop a sense of dissatisfaction by labeling themselves as less successful, happy, or adventurous. In a study of individuals who utilize Twitter and Facebook, participants who admitted to going out of their way to seek validation (e.g., likes) and to portray a perfect profile were more likely to suffer from low self-esteem.”

If you’re going to use social media, seek to do so to strengthen family bonds and friendships while purveying the Gospel (and lessons) of Christ.

That means conveying modesty and humility. That means taking into account the effect your words and pictures will have on others. That means less “selfies.”

Envy can operate like a curse, making it especially unwise to brag on social media (which is what so many posts amount to). Whether subtle or overt, boasting goes to the sin of arrogance and pride. Thus is there a double spiritual whammy.

The solution is to keep our collective nose out of others’ business. We have nearly become “peeping Toms.” Whether or not it leads to the extreme of desperation, it often adds a suppressing, depressing note to what otherwise could have been a good day.