Robert Abel has written a splendid, eye-opening, and useful — healthful — new book, Living in the Garden of Eden, that is chock full of fascinating information on what we should and shouldn’t eat if we want to stay or get well (and live closest to the way God designed things).

From the perils of processed foods and chemicals to what should and shouldn’t be in your water — and what, to your amazement, may be in regular food you eat — this quick-reading work takes us, with a spiritual backdrop, on a whirlwind trip through various aspects of healthy living in a contaminated, ersatz world.

Controversial? We don’t know whether books of the Bible such as Leviticus can be used, in a strict, literal way, as health guides.

For example, Leviticus 3:17 quotes the Lord as saying “It shall be a perpetual statute throughout your generations, in all your settlements: you must not eat any fat or any blood.”

Granted, too much saturated fat from animal sources is a big potential problem — responsible for many cases of cancer and arterial disease.

But a certain amount can be healthful, some nutritionists are beginning to argue, and at any rate: the admonishments in Leviticus: are they nutritional references or simple abstentions (and tests of obedience)?

We don’t pretend to know the answers. It’s all presented for your evaluation.

Moreover, when we look at Scripture, we see this in 1 Timothy: “the Spirit explicitly says that in later times some will fall away from the faith, paying attention to deceitful spirits and doctrines of demons, by means of the hypocrisy of liars seared in their own conscience as with a branding iron, men who forbid marriage and advocate abstaining from foods, which God has created to be gratefully shared in by those who believe and know the truth. For everything created by God is good, and nothing is to be rejected, if it is received with gratitude; for it is sanctified by means of the word of God and prayer.”

But that’s what God created — and when we look at the modern diet, precious literal of the food we eat is exactly how it was fashioned by God.

One may also point out that when it comes to trophic advice, there is in the New Testament Paul’s advice to take wine to soothe the stomach (1 Timothy again). Scripture tells us that our bodies are “temples of the Holy Spirit” and we are to take care of them. What we eat is part of that.

And so we consider Abel’s able book.

Among the fascinating items:

• That back in the Garden, the atmosphere of earth probably had much more oxygen, which of course promoted health. We see today how in treating certain stubborn ailments doctors sometimes prescribe a hyperbaric chamber whereby enhanced oxygen is available to the patient.

• That — he asserts — the pre-Flood vegetation contained more phyto-nutrients, vitamins, and minerals before the atmosphere changed and of course, animals, until the modern era, were “free range,” eating these natural items.

• How our addiction to salt (sodium chloride) not only causes us to eat more (note how companies use salt even in cereal — in items you don’t expect it to be) and bloat due to the triggering of our bodies to retain more water (in an effort to dilute it) — but also adds to the risk of hardening of the arteries, cardiovascular disease, and kidney and liver issues. Most modern, “refined” salt is a far cry from how the Lord made it. “When God created vegetables,” writes Abel, “He designed them in such a way that they would provide the perfect amount of sodium” — far less than is in most foods, and certainly vastly less than in the processed foods that dominate our supermarket (a single large dill pickle contains more sodium than we should consume in an entire day; a single slice of American cheese a fifth; a serving of many biscuit or pancake mixes nearly half; never mind fast-foods!).

• That in refined bleached, enriched” flour is often made with a dough-softening process that uses a compound called L-cysteine, much of which is imported from China, where it is manufactured using toxic chemicals and for protein human hair (collected in barbershops), duck feathers, or petroleum byproducts. “After the human hair and duck feathers have been dissolved in acid, the L-cysteine is isolated through a chemical process, packaged, and shipped off toe commercial bakers in the United States,” he writes. “You may want to conduct your own internet research using the key words.” When you do, you find that hog hair is also used by the Chinese.

• That the artificial compound aspartame is not actually sweet but a composition of three chemicals that trick the brain into thinking something is sweet (while potentially causing a myriad of health threats, brain damage, and even eventual weight gain). One ingredient in aspartame (and not even the worst) is methanol, commonly known as wood alcohol. The astonishing chemicals that are passed off as food will amaze you.

From the perils of modern chemicals with which we are surrounded to recommendations on healthful water — so important to the body — there is bound to be helpful information for anyone.

Every body is different. One must pray, emphasizes Abel, for what is right for you and perhaps your condition. The key is in discipline and the Holy Spirit.

“If you find yourself being tempted to buy a candy bar at the gas station [note the verb “tempted,” as in the Garden], or find yourself being tempted by the vending machine at work, it may be helpful,” says Abel, “to ask for the full armor of God. The full armor is described in Ephesians 6:10 as follows: ‘For our struggle is not against flesh and blood, but against the rulers, against the powers, against the world forces of this darkness, against the spiritual forces of wickedness in the heavenly places. Therefore, take up the full armor of God, so that you will be able to resist in the evil day, and having done everything, to stand firm.'”

All in balance. We don’t advocate any extremism.

But isn’t it modern society, and modern commercialism — straying so far afield from God’s Creation — that is extreme?

[resources: Living in the Garden of Eden and The God of Healing]

[From the news: “A 29-year-long study showed that red-wine drinkers have a 34 per cent lower mortality rate than beer or vodka fans. Researchers attributed this to the fact that red wine is packed with polyphenols (a micronutrient known to protect against several types of diseases), which you can get from places other than wine. Still, not a bad argument for that nightly glass of red.] 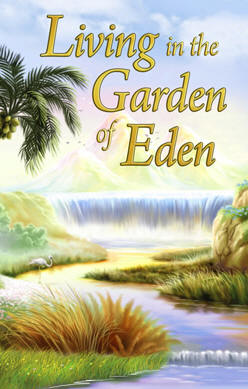