Our society pays great heed to doctors as arbiters of what is prudent — no-nonsense authorities a person can trust — and, one might add, authorities not usually prone to think in terms of the supernormal (a.k.a. fantasy). They are physicians. They are physically oriented.

But many doctors have a spiri 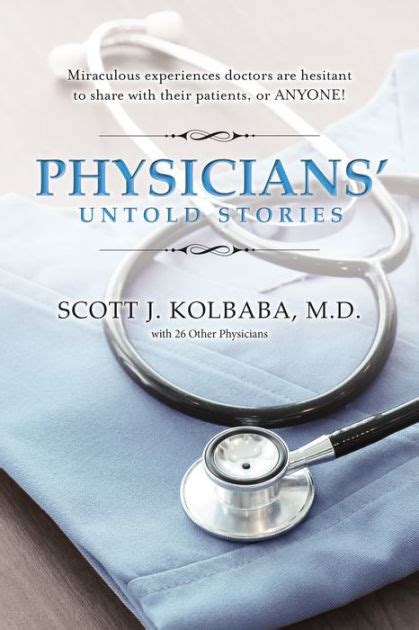 tual side, usually a bit shielded from patients and colleagues, but sometimes out there in the open, as is shown in a compilation by just such a physician named Dr. Scott J. Kolbaba, of Wheaton, Illinois, who details “untold stories” from twenty-seven doctors, including himself.

“About ten years ago, I had an experience that I couldn’t explain logically,” he recounts in a book called Physicians’ Untold Stories. “I woke up in the morning knowing that one of my patients, Taylor Johnson, needed a lung scan.

“I don’t know why I thought that. It really did not make any sense. Taylor was suffering with undiagnosed abdominal pain, not chest or lung pain.”

Classic for a bad gallbladder.

When Taylor paged Dr. Kolbaba, the physician told him to go to an emergency room, which he did, receiving blood tests and a gallbladder ultrasound, all of which were normal.

Dr. Kolbaba saw him in person and ordered some additional blood tests and a special liver and gallbladder scan.

All came back normal.

“That I had such a strong feeling about the need for a lung scan simply was not reasonable,” he recalls. “This was clearly not a lung problem, but I could not get the thought out of my mind.”

So the physician called Taylor and told him he needed a lung scan.

Johnson was set to travel — to Denver — that afternoon, but after Dr. Kolbaba pressed him to get a scan — arranging to rush one that morning — he acquiesced.

It was two hours later that the technician called Dr. Kolbaba with the news.

“Taylor Johnson has a massive pulmonary embolus in the right lung near the diaphragm,” he is quoted as saying to the physician. “That’s probably why he had such bad abdominal pain and not chest pain. Good call to order a lung scan. You probably saved his life!”

And so he probably did. So might more doctors if they sought higher counsel. It is why it is good for doctors to pray (especially with patients).

“I had to sit down because my knees suddenly went weak,” writes the physician. “Had Taylor flown out that day and had another blood clot, it may have been fatal. I immediately admitted him from the radiology department to the intensive-care stepdown unit of the hospital.

“I was so moved by this act of what I could only consider Divine intervention that I started asking my physician friends if they had ever had similar experiences.”

“Many, particularly those with more gray hair, had personal stories to tell about experiences with no scientific explanation. And they were happy to share them with a colleague who would not criticize them.”