Perhaps you know — we did not — that the color blue is thought to protect against evil.

No wonder it’s our favorite.

Perhaps you’d heard — again, we didn’t — that back in the times of the early missionaries, doors in the Southwest United States were painted blue.

“According to tradition,” author Marion Amberg points out, in Shrines and Wonders: The Pilgrims’ Guide to Santa Fe and Northern New Mexico, “Spanish settlers painted their doors, gates, and window trim blue as a form of prayer ‘to ward off evil spirits.'”

This is found on centuries-old adobe homes, and on certain modern ones. Some say it started because of the influence, among the Indians, of the Catholic Spanish mystic, Maria of Agreda, who apparently wore a sky-blue cape.

But more probable, one might surmise, is how the color is so closely linked with the Blessed Mother, and especially the image of Guadalupe — replicas of which were no doubt shown to the Indians and settlers by the Spanish missionaries, who  largely came to the American Southwest by way of Mexico.

How often the Blessed Madonna is associated with it! (Is it because, some have wondered, her Baby was a Boy?)

Or perhaps because blue is associated with the sky/Heaven?  (Do you have speculations? [If so, write here] There is even a blue Scapular! [See here or below]) Is blue simply balm in our corybantic times?

As one viewer notes, in Numbers 15:37-41 it says, “The Lord said to Moses, ‘Speak to the Israelites and say to them: Throughout the generations to come, you are to make tassels on the corners of one’s garments, with a blue cord on each tassel.

You will have these tassels to look at and so will remember all the commands of the Lord, that you may obey them and not prostitute yourselves by going after the lusts of your own hearts and eyes. Then you will remember to obey all My commands, and will be consecrated to your God. I am the Lord your God.'” In some cultures, blue signifies trust, security, and authority, and is considered to be soothing and peaceful.

Of course, blue can also mean sorrow. Notes Shutterstock, “In some countries, blue symbolizes healing and the repulsion of evil — as with those early folks in the Southwest. In Eastern cultures, blue symbolizes immortality, while in the Ukraine, it denotes good health.”

Let’s stay with the Blessed Mother!

She wore a blue sash at Lourdes. She had blue at Kibeho. She was pictured with blue at the apparition site near Green Bay.

In San Nicolás she wore a blue gown. At Bannneux in Belgium her dress reflected a blue light.

At Beaurang in that same nation she was described with a sash of “unforgettable blue.” She was depicted all in blue at Pontmain. It’s seemingly endless. There is the Blue Army of Fatima. Blue is Mary’s color!

And bedecked in it, let us further and finally observe, she indeed is often shown stepping on the serpent’s head.

[As a site called Catholic Tradition notes: “The Blue Scapular originated in Spain and is connected with Saint Beatrice da Silva Menesses (1426-1492), a Gstercian nun. In 1484, she founded the Order of Franciscan Sisters of the Immaculate Conception of the Most Blessed Virgin Mary [Conceptionists].

One of the requirements of the Rule of Life for these nuns was to wear the Scapular of the Immaculate Conception beneath their white habits. The growing popularity of this form of devotion to Mary among the faithful encouraged the Conceptionist Sisters to approach the Holy See with the request for special indulgences and privileges for all those who piously wore their scapular.

In Naples, Italy, after receiving Holy Communion on the Feast of the Presentation of the Lord in 1617, Sister Ursula received a vision of the Blessed Mother clothed in a white garment over which she wore another garment of azure blue.

[The Scapular of the Immaculate Conception has since traditionally been made of blue cloth, thus, it is called the “Blue Scapular.”]

In her arms, Mary held the Infant Jesus. She was surrounded by many people, all attired in a similar manner.

The Blessed Mother addressed Sister Ursula with these words: “Cease weeping, Ursula, and change your sighs into heartfelt joy.

Listen attentively to what Jesus, Whom I am holding in my lap, will say to you.” Then Jesus revealed to Sister Ursula that she would found a convent where 33 nuns would live a life of solitude and seclusion and be dressed in the same attire as the Blessed Virgin Mary of her vision.

The Savior promised many special graces and spiritual gifts to those who would zealously follow this way of life.

From 1633, Sister Ursula’s community accepted the title, Theatines of the Immaculate Conception of the B.V.M.

In 1910, Pope Pius X gave his permission for substituting the blue cloth scapular with a medal. 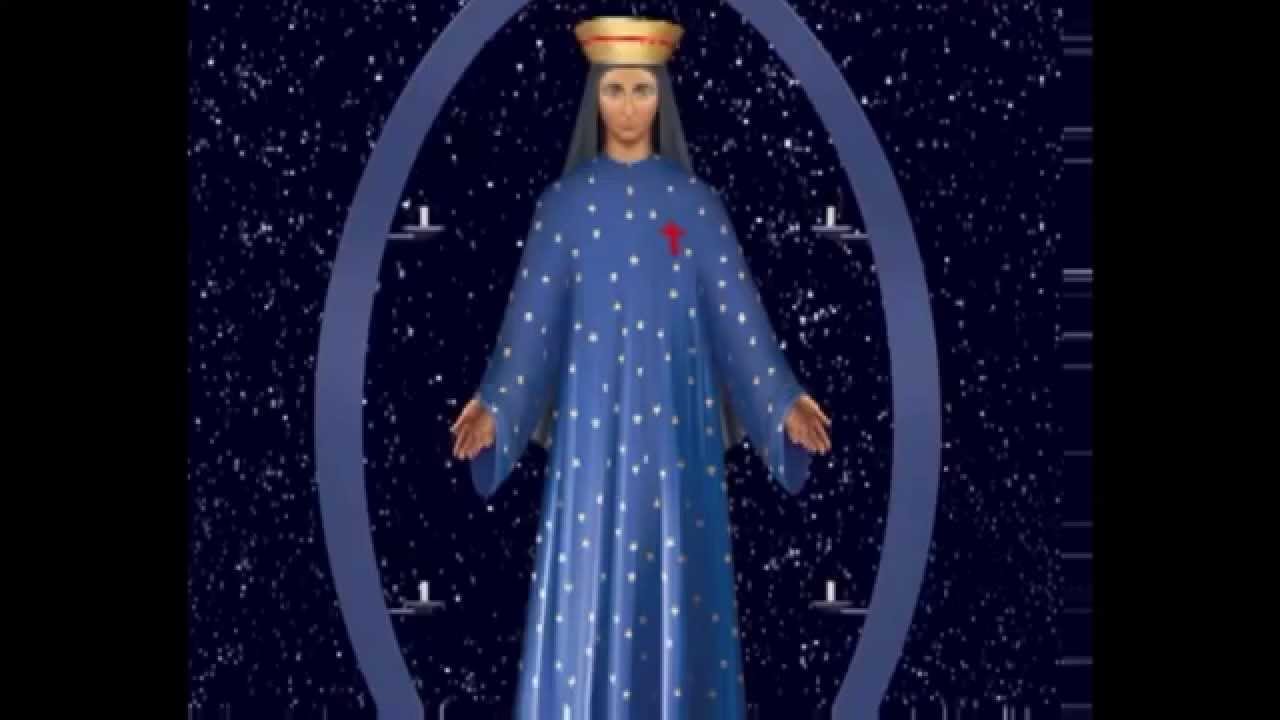