Or through last-minute mercy, purgatory?

We can’t judge, but we can ask additional questions — one in particular:

If Judas was harshly dealt with by the Lord, what about the many in the crowd who shouted for Jesus’s death? How many were there? What were they like? Where did they go?

“They cried out all together, saying, ‘Away with this man, and release for us Barabbas!’ (He was one who had been thrown into prison for an insurrection made in the city, and for murder.) Pilate, wanting to release Jesus, addressed them again, but they kept on calling out, saying, ‘Crucify, crucify Him!’ And he said to them the third time, ‘Why, what evil has this man done? I have found in Him no guilt demanding death; therefore I will punish Him and release Him.’

“But they were insistent, with loud voices asking that He be crucified. And their voices began to prevail. And Pilate pronounced sentence that their demand be granted. And he released the man they were asking for who had been thrown into prison for insurrection and murder, but he delivered Jesus to their will.”

Jesus said, ““Daughters of Jerusalem, stop weeping for Me, but weep for yourselves and for your children. For behold, the days are coming when they will say, ‘Blessed are the barren, and the wombs that never bore, and the breasts that never nursed.’”

His Blood was on more than Judas’s hands.

Pontius Pilate? There is the sin of indifference. We “wash our hands.”

Pope Francis, in 2015, taking direct aim at the wealthy and powerful of the world, warned in his message for Lent that they are often “slaves to sin” who, if they ignore those in need, “will end up condemning themselves and plunging into the eternal abyss of solitude which is hell.”

How extensive is His Mercy?

If the crowd escaped the netherworld, extensive indeed.

Plead that Mercy this Sunday. 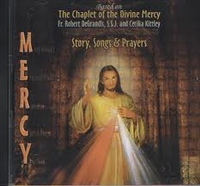