News item: “Sightings of unidentified objects in 2020 nearly doubled in New York from the previous year, to about 300, according to data compiled by the National U.F.O. Reporting Center. They also rose by about 1,000 nationwide, to more than 7,200 sightings.” That’s The New York Times — hardly a publication open, in most cases, to the arcane.

But true it is: a constant stream of such reports flashes across various news outlets. Never before have “UFOs” been in the mainstream media like they are these days, largely due to the report several years ago that totally unexplained objects were seen and filmed by Navy pilots off California and Florida.

“THE SPACEX starship is reported to have had a near-miss with a UFO — with astronauts on board told to buckle up and prepare for a crash, NASA has revealed. While en route to the International Space Station after a successful launch in Florida, the four crew members were notified they could soon collide with an unknown object.” Apparently, no one is saying any more.

There’s no question the possibility some of the “objects” could be extraterrestrial. There are billions of stars, many with planets, or so our astronomers estimate. Many UFO cases go far beyond the “tic-tac” objects spotted by the Navy pilots and radar operators moving at incredible accelerations and even moving through water or causing a boiling in the ocean, when one hovered over the water (as witnessed by Navy pilots), before zipping out of sight. Doesn’t that seem otherworldly?

There are countless claims of creatures attached to such sightings and even  “alien” abductions. We’ve had “special reports” about this and will have a future one on obscure but amazing reports of such entities on the ground, as well as supposed “crashes” around the world.

There may be more than you think — these, too, reported at times by police officers and other authoritative types.

“They come up toward the Hudson Valley, it’s beautiful up there, you get clear skies and then all of a sudden you see this thing zipping through the sky, that stopped on a dime, goes straight up, takes off again, stops, comes back — we’re talking incredible speeds,” said Mr. Chris DePerno, a retired police detective. “With the Covid thing, more people are looking up.”

When it’s not space junk, as from all the satellites Elon Musk has launched, or something else entirely earthly, such as a blimp, what they are often seeing as we have pointed out before may be what Native Americans knew as “spirit lights.”

Although some tribes also recorded “star people,” orbs of light are often associated with paranormal events, whether in Indian lore, a “haunted” locale , a graveyard, or an apparition site.

When the Virgin Mary appeared at LaSalette in France, it was in an oval light which seems a sort of transport phenomenon or portal good and evil spiritual forces can use to enter our domain (if we believe any such reports).

Frequently, UFO reports are in areas where witchcraft and other occult or New Age activities are rife. The Hudson Valley long has been a UFO — and spiritual — hotspot.

Many UFOs bear the characteristic of deceiving spirits, as do “aliens” that supposedly come from them. If spirits can show themselves over a tombstone as an orb, they can also do so in the sky — and indeed, sightings also frequently hover or sweep over old Indian burial mounds. It’s why we call a recent book, Lying Wonders, Strangest Things.

In the Times article is quoted Virginia “Cookie” Stringfellow, who says Memorial Point at Bear Creek Harbor in Ontario, N.Y., is one of the places she was “taken” by alien beings. “She does not use the term ‘abducted,’ because she went willingly,” says the article.

Strange stuff. Very strange. What we invite we often sight (and often comes back to bite).

Is Stringfellow a witness to extraterrestrials or a spirit medium?

This much is known: the UFO hotspot in Upstate New York is in the same county (Wayne) that spawned the Fox sisters: two girls who began communicating with rapping sounds in their home and soon sparked the spiritualism-medium-seance craze of the 1800s (which reached even into the Lincoln White House). Their house was just a twenty-minute drive away.

When not supernatural, flying objects like those spotted by Navy pilots might be mysterious drones — “mysterious” because they act in a way and with speeds unknown to our publicly known technology.

Are they from China, or Russia, some wonder? Might those nations have produced technologies of which we — or at least our public — is not aware?

That’s not to say the deepest part of the “deep military” doesn’t know, at levels far beyond the secrecy clearances of Navy pilots. One example is the legendary Area 51 in Nevada. There, drones already may have been developed to do things that seem decades in the future simply because we have not been privy to their development.

A tantalizing question: might the most secret elements of the U.S. government be testing drones on our own pilots and aircraft?

BBC reports that “one of the most advanced today is the Taranis, a UK-built drone with a top speed of 1,127km/h (700mph) and 9.7m wingspan that is nearly invisible to radar.”

But in a recent interview with the New York Post, government whistleblower Luis Elizondo — former head of the Advanced Aerospace Threat Identification Program, which operated out of the secretive fifth floor of the Pentagon’s C Ring — “made clear that UFOs have been observed to have qualities that are nothing less than otherworldly. He described vessels flying at 11,000 miles-per-hour and being able to turn ‘instantly.’ Providing a comparison, he explained, for our most advanced jets going at the same speed, “if you wanted to make a right-hand turn, it would take you about half the state of Ohio to do it.’” 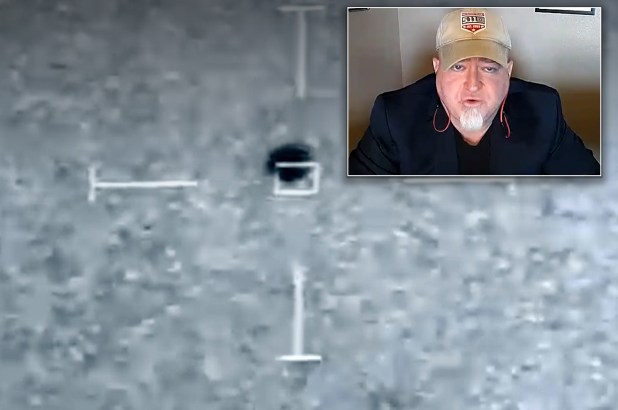 Back in the 1980s, when the Hudson UFO “flap” first began, some witnesses heard what sounded like engines. A spiritual or extraterrestrial object is unlikely to do that.

The famous “Phoenix lights” of 1997, meanwhile, seemed part of one huge, triangular-shaped craft (estimated to be the size of a Boeing 747, if not larger) that was witnessed by thousands of people, including government officials. It soundlessly swept from the Nevada line to Phoenix south to the northern boundaries of Tucson. 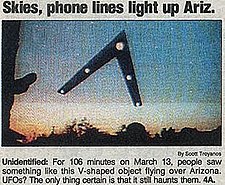 Interestingly, there is an Air Force base north of Phoenix — within that flight pattern — and the day before the massive triangular “object” was seen in Phoenix, law enforcement officials reported an identical “UFO” above a large Navajo Indian reservation in Arizona that is also known for paranormal activity. (Triangles long have been associated with occult symbology.)

Off the coast of North Carolina’s Outer Banks have hovered lights that seem to be monitoring something. And orbs of unidentified luminosities have been reported by astronauts, especially those at the space stations. (So have supernormal phenomena, such as angels.)

In 2020, many in Colorado reported what seemed clearly to be drones over their vicinities.

As the London Guardian noted:

“At twilight on New Year’s Eve, 2020, Placido Montoya, 35, a plumber from Fort Morgan, Colorado, was driving to work. Ahead of him he noticed blinking lights in the sky. He’d heard rumors of mysterious drones, whispers in his local community, but now he was seeing them with his own eyes. In the early morning gloom, it was hard to make out how big the lights were and how many were hovering above him. But one thing was clear to Montoya: he needed to give chase.

“As he approached the drones in his car, they ‘took off very fast’ and Montoya tried to follow. He confesses hitting 120mph before losing track of them. ‘They were creepy, really creepy,’ he says. ‘I don’t know how to describe it, but it’s almost as if they were watching us.’ That night, Vince Iovinella, deputy sheriff at Morgan County Sheriff’s Office, received more than 30 calls from locals reporting drones ‘zipping around all over the place’ – Iovinella himself saw one with red, white, and green lights that he also tried to chase. ‘It outran me,’ he recalls.”

Sounds like the befuddled Navy pilots in California and Florida.

Although no one should hold his or her breath, many hope to have further indications later this year, for the $2.3 trillion appropriations package signed by former President Donald J. Trump late in 2020 included a provision that the secretary of defense and director of national intelligence collaborate on a U.F.O. report and release it to the public. The wager here is that if anything much is released, we’ll still be faced with a mystery wrapped in a puzzle wrapped in a conundrum.

Why Have UFO Sightings More Than Doubled Over The Last Two Years?