Yes, a bit of hyperbole.

But this is allowed?

Not even sure where exactly ‘this’ is. (Seems like Germany.)

Unfortunately, the one below we know is in the Archdiocese of Chicago, decked out by that most controversial of priests, Father Michael L. Pfleger, a well-known social activist in Chicago, who celebrated Christmas Eve Mass (live-streamed) from St. Sabina Church.

As a Catholic news outlet put it, “Outraged by a freewheeling Christmas Eve Mass that featured jazz musicians, choreographed dances around the altar, and theatrical lighting effects, some Catholics are calling on Cardinal Blase Cupich to crack down on liturgical abuses in Novus Ordo Masses in the Archdiocese of Chicago, rather than imposing severe restrictions on reverential Traditional Latin Masses.” It’s one thing when the Vatican, not wanting to offend Amazonians, turns the other way when natives bring in the idol, Pachamama, to a synod. But, again, this?

The Mass in general as celebrated by many needs to be reined in and fine-tuned a bit. Homilies have become meandering in many parishes (a reason young cite, perhaps seeking an excuse, for not wanting to attend Mass), and priests feel free to talk in a chatty way not just during sermons but also during opening and closing prayers, even intermingling their own comments with those prayers.

While the Latin Mass where we live (every Saturday at a Carmelite monastery) attracts only several more than regular weekday Novus Ordo Masses there, few could argue that it brings forth the dignity of the triune God.

Meanwhile, singing in some places likewise has gotten out of hand, interfering even with prayer after receiving the Lord.

Then there is the “Kwanza” Mass. (Excuse the sometimes strident video, but it makes some points.)

(Was there really a “pagan ash procession”?)

There is a place for reaching out — we should — but not in a way that interferes with or mimics the liturgy (hopefully this did not).

One excellent trend, however: more and more parishes are reciting the St. Michael prayer.

How one often longs for… quiet prayer; solitude.

(No one knows how the world’s most remote church was built atop this 130-foot stone pillar, near the village of Katskhi in western Georgian region of Imereti.)
+ 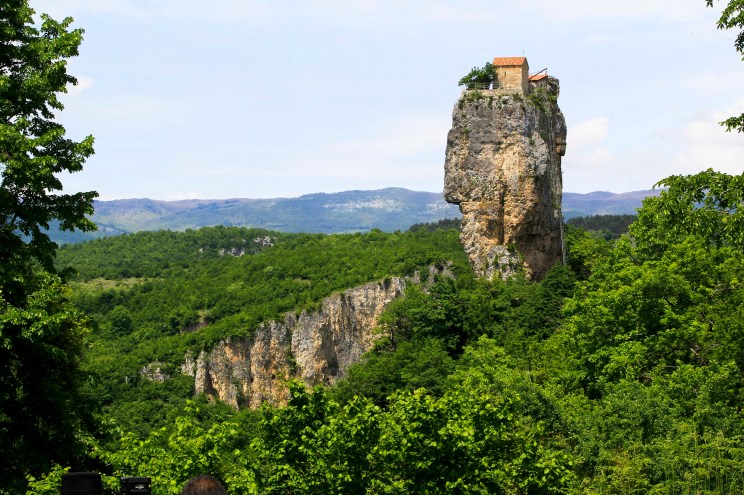