There are certain observations to be made at this time, starting perhaps with a question: Might this whole pandemic be a purification for Mass itself?

One notes how much quieter it has been, with not quite as much shuffling about, hand-grabbing, and not as many songs belted out. Music is great — a high form of prayer — except if a Mass is turned into a concert.

There is less talking: folks aren’t making a racket before Mass nor as they go up for Communion. This is a huge plus. Will it continue? Greetings are also a bit more subdued and dignified. There are fewer acrobatics in the aisles. How dearly missed, though, is Holy Water!

Is it really a hazard to have a large dispenser so the faithful can fill up individual bottles? Is there any more potential exposure to the virus than with other things (such as pews and doors) that have to be touched during Mass? Novel idea: if we can’t have Holy Water, can sanitizer be blessed?

We have for a while wondered two things:

Might it be that the precautions we take with masks and sanitizers simply serve to expose us gently and gradually to covid, working like a gradual vaccination? If so, very worthwhile. And could it be that the virus is now mutating to a less virulent form (which often happens with viruses)? Pray God. It seems impossible to completely avoid the bug, even with safeguards.

“Masked exposures are no substitute for a bona fide vaccine,” says a report. “But data from animals infected with the coronavirus, as well as insights gleaned from other diseases, suggest that masks, by cutting down on the number of viruses that encounter a person’s airway, might reduce the wearer’s chances of getting sick. And if a small number of pathogens still slip through, the researchers argue, these might prompt the body to produce immune cells that can remember the virus and stick around to fight it off again.”

We’re approaching September 11, and author Jonathan Cahn of Harbinger fame is out with a new book, Harbinger II: The Return. We haven’t had time to read it (we have it here, free shipping) but will purview it shortly, for Jonathan, a Messianic rabbi, is an inspired man who always comes up with interesting synchronicities. For example, Cahn relates the interesting fact that in ancient Israel, chastisement often came nineteen years after a warning, as this year of 2020 is nineteen years since that horrible day 2001.

Take it a step further: September 11, 1609, was when Henry Hudson began his voyage up the Hudson River. While he didn’t find what he was looking for (a northwest passage), notes a blogger, his exploration led to European migration and, thus, to the founding of New York City  Not mind-blowing, but interesting. As Cahn further points out, construction on the Pentagon began on September 11 (1941).

We further have found that New York City was the place where Benjamin Franklin sought to end the Revolutionary War with British General Lord Howe. It was the only attempt at a peaceful solution to the war and took place at the Conference House on Staten Island on September 11, 1776.

Now there can be happenstance — can’t there? Or perhaps not? Cahn is a Jew and orthodox Jews speak Hebrew and Hebrews don’t have the word “coincidence” in their language (perhaps neither should we). There are two words, however (tzeruf-miqrim, which mean “combination of happenings”), that can be seen as meaning the same thing. Jonathan got excited over that lightning storm on July 22 that caused spectacular strikes on both the Freedom Tower and the Statue of Liberty. He saw these as major signs, and perhaps they were. A bit of perspective though: because it’s made of copper and stands there in the water like a sore thumb (or lightning rod), it gets hit many times a year; some say six hundred. Translation: often. And the Freedom Tower? 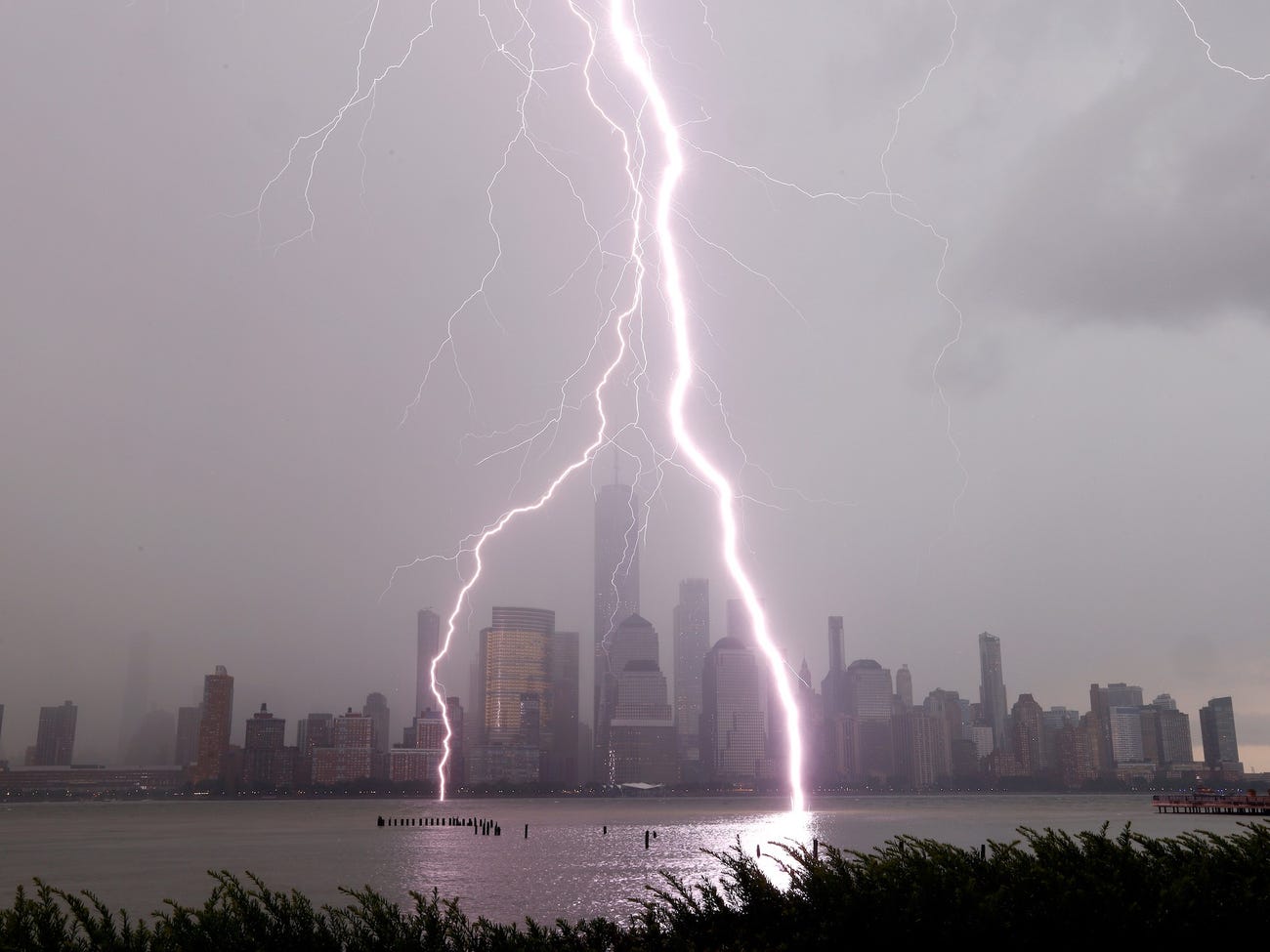 Well, no one seems sure as yet, but the shorter Empire State Building takes at least twenty-five strikes a year, so the odds of the Freedom Tower and statue both being hit the same night are not extraordinary “coincidences,” but, considering the ferocity of that particular maelstrom, and the times in which we live, interesting. And throw in Halloween!

The religio-spiritual component of the upcoming election has some fascinating aspects. Excuse us for being, or trying to be, objective (at the risk of ostracization). Let’s look at it not politically but, again, as is our wont, synchronistically (mystically).

And really it comes down to questions.

With Mr. Biden, how will the U.S. bishops react to him, if perchance he becomes president and walks up an aisle for Communion? Will there be a set Church strategy, worked out at the bishops’ conference, on how to handle that, or will it be up to individual bishops with jurisdiction over where he is attending or even come down to individual priests? Look for controversy here, if he gets to the White House, and even during the campaign.

It’s certainly an interesting dilemma, in that, while personally opposed to abortion, Mr. Biden, who regularly attends Mass in Delaware, is about as pro-abortion as a politician could be, supporting even the termination of unborn humans up to the moment of birth. This of course is astonishing — how one can separate such an act and legislation in favor of such an act from Catholicism. Expect to see him with some frequency in Lutheran and other Protestant churches.

As for the president, one question, in this vein, will be the vaccine. There is an ardent push for one to be available by election day, but here we have added drama: will it be one derived in part from the stem-cell lines of fetuses that were aborted? How will we pro-lifers react if that’s the case? Some bishops already have warned Catholics about getting such a vaccination (while the Vatican long has held that if it serves the greater good, such a vaccination can be taken by a Catholic).

Mr. Trump, who is not a regular churchgoer, and was pro-choice before his candidacy, but has been extremely steadfast in pro-life decisions since rising to the Oval Office (and his crucial appointments to the Supreme Court), also faces a challenge in the realm of Evangelicals, who comprise a large part of his base. One of the most important Evangelicals, Jerry Falwell Jr., recently had to resign from the university his father founded due to salacious scandals we’ll not detail. Will that have any impact, and will former Trump lawyer Michael Cohen, who claims Trump mocked Evangelicals behind their backs, have any further effect?

Election day, coincidentally, is this year the feast of Saint Martin de Porres. The illegitimate son of a Spanish nobleman, Juan, and a young freed black slave, Anna Velasquez, Martin grew up in poverty. He spent part of his youth with a surgeon–barber from whom he learned some medicine and care of the sick.  Stay tuned!

Just do yourself this favor: stay clear of where lightning most likely causes damage.