Let’s call this “here and there on the internet,” and take a glance around the outer banks of spirituality.

There is prophecy:  we have long posited, Donald J. Trump is virtually certain to take office this week, despite predictions that it won’t happen. Still, one can wonder at the strange week behind us and the days leading up: the dossier claiming that Russians have material with which they could blackmail the incoming leader, the now verified Russian hacking of the Democratic Party (in an attempt to influence the election, which President-elect Trump as well as his proposed secretary of state now say did indeed occur), persistent complaints that he did not win the popular vote, and now even a claim from a civil-rights leader that Trump’s election was therefore not legitimate.

It all has gone from simmer to nearly a boil.

Such facts have erupted in quite a fashion and with such timing that, for a moment, or two, one could be excused for wondering if intelligence agencies are trying to undermine the incoming president. If Russia has blackmail material on him, they seem to be implying, is not Donald Trump a security threat to the country?

These disturbances are without precedent, and so one could further wonder if it was what had been sensed by those who prognosticate but turned into a more radical prediction (i.e., that he would not be able to take the oath) by alleged seers.

Often prophecies can sense something — a coming disturbance — and then exaggerate or expand on it as the prophetic pulse arrives through the filter of human senses (and intellect).

Food for thought (though no justification for errant prediction). If ever there was a possibility of halting an inauguration, it was the premise of Russian involvement in U.S. politics — a possibility, but far remote from a probability.

There’s that, and then the realm of spiritual warfare.

This field was unusually active in the past few days: articles about an “possessed” doll hit the secular news, as did a “viral” photo shared on Facebook by a Phoenix resident that seemed to show a large, dark figure (left, principality?) standing along a street near his home (let us instead focus on Saint Michael, right), news that was joined, coincidentally, by still other articles about release of a Netflix movie based on a book by the late, brilliant, but very controversial and perhaps questionable Catholic author, Father Malachi Martin.

The articles in this case focused on the assertion by Father Martin that he had been “pushed” down stairs by an unseen force, a fall that eventually led to his death (he said he felt “pushed”), following the “exorcism” of a young girl.

Debate continues to swirl over whether he was a legitimate priest [see bottom for mail input].

Father Martin left the active priesthood in 1966, decades before he wrote the book, Hostage To the Devil, upon which the movie is based.

Was this book fact or fiction?

One who thought it was fabrication was another Catholic writer, Peter Blatty — who penned the most famous such book in history, The Exorcist (thirteen million copies and a blockbuster movie based on it).

To make matters stranger still, Blatty died last Thursday in the midst of all the aforesaid spiritual-warfare news. (He was 89 and had been ailing).

That’s something that bothered Blatty: He prevailed upon the director to change the ending in a subsequent release, to let good predominate (as it does). Let us always be edifying!

Edifying it is when God makes His Presence manifest.

Is it the case with the photo (below) of Father Jeffrey Keyes at consecration at Extraordinary Form Mass (Latin) at 10:00 p.m. on Christmas Eve at St. Eugene Cathedral, Santa Rosa, California.

The photo was taken by a choir member and sent to us by viewer Eileen Carol (who noted a “Face” in the incense, to the priest’s left). 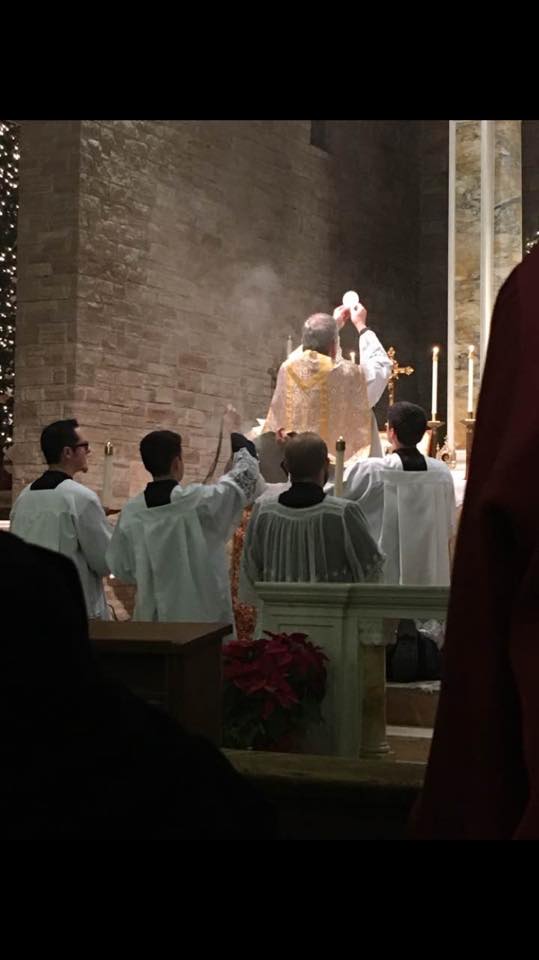 Writes a doctor from Texas, Dr. Christopher A. Bloom (in a note to the pastor of the Cathedral of St. Francis, Santa Fe, New Mexico, during fall of 2016, “On vacation with my wife, we’re Catholic, and another couple friends of ours (they’re Protestant): I was crossing the street and saw a beautiful moon overlooking your Church so I took a picture with my I-phone. That picture is on the attached file. The reason I am writing you is that just last week I was looking to put another screen shot on I-phone background an I noticed the image of Christ in the clouds next to the moon at about the one o’clock position! I call the photo the Good Shepard. I did not recognize the image at the time of the photo. So I wanted to share this photo with you. Please feel free to use it as you will. It belongs to our Church.”

“In a stunning reversal of past policy Father Vincent O’Keefe SJ, former Vicar General of the Society of Jesus and a past President of Fordham University, affirmed that Malachi Martin was in fact granted a dispensation from all his vows in the Jesuit order except for chastity. This dispels decades of rumors that Father Martin was defrocked for having had an affair with the wife of a famous journalist. This was the false lie spread by past Jesuits to discredit Father Martin. Martin requested and received a special dispensation by Pope Paul VI to remain a Catholic priest and say Mass in private.

“Ever since Father Martin’s scathing review of his former order The Jesuits: The Society of Jesus and the Betrayal of the Roman Catholic Church (1988) rumors were spread by members of this order claiming Martin was defrocked and expelled from the Church of Rome. Martin denied this charge until his death in 1999. Father Mitchell Pacwa – chief spokesman at the Catholic run EWTN would regularly hang up on callers who inquired about Martin on his live call in show.

“The clarification appeared on the Malachi Martin yahoo e-group posted by a member who communicated with Fr. Tom Widner SJ, Secretary for Communication of the US Jesuit Conference, concerning Martin’s status. Father Widner questioned Father O’Keefe – now retired – and he recalled Martin’s receiving a special dispensation relieving him of all his vows except for chastity. The communication (see below) also promoted two other myths about Martin including the lie that Martin lived in an unchaste relationship. The message referred to an incorrect obituary of Martin which appeared in the New York Times. The lady in question was merely Martin’s landlady for whom he also acted as spiritual advisor. The communication also falsely reports that Martin requested release from his vow of chastity, another lie which was spread about the scholarly priest.

“However, the fact that the Jesuits have confirmed that Martin was a valid priest his whole life and was not defrocked marks a radical change in Jesuit policy concerning Father Malachi Martin – they are now acknowledging his status as a life long priest.

“Source: I spoke with Fr. Vincent O’Keefe, former vicar general of the Society of Jesus who is now retired. According to Fr. O’Keefe, Malachi Martin was indeed dispensed from his vows of poverty and obedience but not the vow of chastity. At the time Martin requested such dispensation, the Vatican was not dispensing priests who so requested such dispensation from the vow of chastity or celibacy. Fr. O’Keefe pointed out that Martin never married. His obituary in the New York Times, however, points out that Martin lived with a female companion.”]