Have you noticed that states with the most liberal abortion laws are in decline, while those with the most restrictive are outright booming?

It famously rolled out the most restrictive such laws in the U.S. last week (making abortion illegal once a heartbeat is detected, which means anything after about six weeks — before many women even know they’re pregnant) and has seen its population surge sixteen percent since 2010, from 25.1 million to more than twenty-nine million now.

Now, a lot of that is Hispanic immigration, or due simply to the national trend of northerners seeking lower tax rates and warmer weather (especially in retirement). But the bottom line is that the economy in Texas has been red-hot.

The same is true of states such as Georgia, Florida, South Carolina, Tennessee, and Arizona, which has banned mail delivery of abortion-inducing medication and restricts organizations that provide abortion care from receiving state funds.

Meanwhile, states such as New York, California, Illinois, Massachusetts, New Jersey, Connecticut, and Vermont have little or no or negative growth.

Again, it’s not even across the board. There are states (such as Louisiana and Kansas) that have fairly tight abortion strictures but are doing a similar dog paddle demographically. And there are liberal states — take Oregon and the state of Washington — that have boomed.

But it does seem a tad more than coincidental. Florida has surged past New York State, which is as liberally as they come, while on the other coast California has seen substantial outbound migration — including to Texas and Florida. 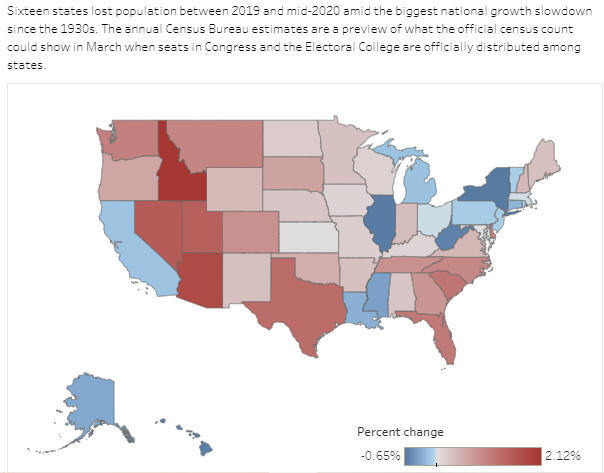 It is perhaps time to reckon with this population shift, especially the tremendous flow of people from New York and New Jersey to Florida — which is at least for now ready to emulate Texas. The trend nationally, even in some of the politically moderate states, has been more restrictions as the nation faces what could be a Supreme Court reversal of Roe v. Wade, or something close.