Recently, investigative articles about that largest and loudest of social-media platforms revealed, as one report put it, that “five years ago, Facebook gave its users five new ways to react to a post in their news feed beyond the iconic ‘like’ thumbs-up: ‘love,’ ‘haha,’ ‘wow,’ ‘sad,’ and ‘angry.’ Behind the scenes, Facebook programmed the algorithm that decides what people see in their news feeds to use the reaction emoji as signals to push more emotional and provocative content — including content likely to make them angry.”

The angrier a post (or YouTube video, blog, comment, or e-mail blast), the more clicks it generates. They become “viral” indeed: we’re also in a pandemic of this kind).

“Anger and hate is the easiest way to grow on Facebook,” one expert told the British parliament, which like other governments is looking into the woeful effects — the “fruits,” as we Christians might say — of the global conglomerate.

Most “successful” content, it was revealed — the posts that generated highest traffic — were not only anger-generating but attached to contrived, factually incorrect, and at times outright toxic content.

Unfortunately, the mainstream media, which should be the flood wall, has been so liberal and biased against conservatives (and Christians) that it has lost most of its credibility — no longer a check against what is often outrageously errant but convincing information.

And so emotion — especially anger — is the driver.

It is critical to remember, however, that while anger may generate more “traffic” — succeed like a virus in the world — the opposite is true in the afterlife. Every “click” in the direction of hatefulness is a step on a highway to a nether region.

Purgatory — or worse — awaits the hateful.

If Jesus showed flashes of righteous indignation — as He certainly did in the Temple, and when He said to Peter, “Get thee hence, Satan,” and when He mentioned an “evil generation” and a “brood of vipers” — far more prevalent was His message of compassion, longsuffering, healing, forgiveness, pacifism (remember the apostle who cut off an attacker’s ear?), and love, which He called the most important Christian trait.

This we have forgotten: His warning about casting stones, His admonishments to the Pharisees and Sadducees (with their laws, legalisms, and accusations), His cautionary about Gehenna, about disobedience, because we follow media like Facebook more than we do Scripture. 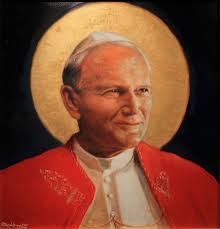 There is righteous indignation. There is a place for protest (see the Gdansk shipyard).

But it is not a constant state of mind.

In the afterlife, we may be shocked at how unrighteous anger usually is.

There, with the eyes of eternity, we will see that those who seemed so strong and pugnacious and critical and militarized orthodox in their Christianity were using anger as a cover for fear and weakness.

How did Jesus defeat the devil? How did John Paul II cause the fall of Communism?

We will defeat abortion, euthanasia, pornography, transgenderism, materialism, pollution, fascism, and other evils with humility, with prayerful strength, with devotion, not with vitriol. It is sanctity that grants the sword of Heaven; the sword of electronics is a plastic one.

In this current, horrible period of rage, far too many fight the wrong enemy — taking aim at each other instead of the darkness that is spoken about in Ephesians and surrounds us.

That book of the New Testament tells us that our enemies are in the spiritual places and not of this earth.

To quote that chapter: “Put on the armor of God so that you may be able to stand firm against the tactics of the devil. For our struggle is not with flesh and blood but with the principalities, with the powers, with the world rulers of this present darkness, with the evil spirits in the heavens.”

In our current time are those who present anger as strength when it is a sign not of strength but of fear. Anger and vitriol and disobedience disguise: weakness. Those possessed of it lash in a way that is earthly instead of confronting the foes that roam and attack from more daunting and invisible realms. Fighting evil directly — in the spirit — is true warfare; is true courage.

Says Titus, “Avoid foolish disputes, genealogies, contentions, and strivings about the law; for they are unprofitable and useless.

“Reject a divisive man after the first and second admonition” (3:9-10).

“Anyone who does not love does not know God, because God is love” (1 John 4).

Jesus said the greatest commandment was what — coarse discourse?

Those who harbor disdain have lost their way.

Those who stray are following themselves.

Hatred entices in the name of good.

True goodness follows the exact way of Jesus and puts no stock in the fantasies and false courage of loud proud men shouting endlessly with their bullhorns in the public square.