There it was, an inscription announced last week by the Israel Antiquities Authority, discovered at the entrance of a church in Taiba, a village in the northern Jezreel Valley.

The inscription: “Christ, born of Mary.”

The point: as far back as that — and in all probability much farther — the Virgin Mary has warranted special mention by those who recorded the power of Christ Jesus.

Why would they mention her — why would they feel it so necessary to say who His mother was — unless even in those early times, before Lourdes, before Guadalupe, before Fatima, the Virgin carried special intercessory power?

It goes beyond just that. As it turns out, the inscription has been found in other early churches as well, placing Mary at the very foundation of the Christian Faith and the Catholic Church.

This will be discussed — her role through all of history, as well as in our current time, and with future events — not just as model of holiness, not just as the gentlewoman who gave birth to Our Savior, not just as a mother to us all, but as a key warrior against forces of evil.

For even these secular researchers noted that the expression, “Christ, born of Mary,” was not just an early church decorative, but a palladium — a holy, powerful talisman and invocation — against the devil.

Archaeologists, we are told — on a site called LiveScience — found that the previously unknown church contained mosaic pavements arranged in a geometric design. That opening line, “Christ born of Mary” (to a brief prayer) was likely intended to protect the reader of the inscription from evil forces — a common phrase used in inscriptions and documents from that time, said Leah Di-Segni, a researcher at the Institute of Archaeology of the Hebrew University of Jerusalem, who translated the text. “The inscription greets those who enter and blesses them,” Di-Segni said in an official statement.

Her role and supernatural manifestations actually trace back to the very first century. Few realize that in those first several centuries was even a shrine to the Virgin Mary at Puy in France that was comparable in pilgrimages and healings to Lourdes!

Many don’t realize her role in establishing chapels, churches, and even basilicas throughout Europe and later South America and Asia for more than two thousand years.

It is time to discuss this. It is time to put the Blessed Mother in her proper context. It is time to realize her obvious significance — named right there with her Son in the earliest days of Christendom.

Her prominence and importance can no longer be denied. And she remains with us today and into the future as prominent as ever. She has much to explain about our current time and where we are headed — what the future has in store.

And so it is that we have this succinct, potent new prayer against evil.

So simple. So telling. So unfailing.

Put it above the entrance of your home, as it was in that lintel at the ancient church. Put it at your workplace. Put it on your lips in prayer. Use that in the face of the foes who in this time surround us on all sides.

[resources: Michael Brown On-Line Retreat, “The Apparitions and Secrets of Mary: From Deep Past To Future Secrets, Saturday, February 6, 11 am -1 pm EST”] 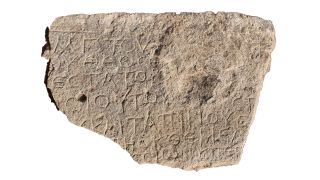